Blue and White's Benny Gantz seeks a coalition with Yisrael Beitenu's Avigdor Liberman to lead Israel "onto a new path and toward a new future." 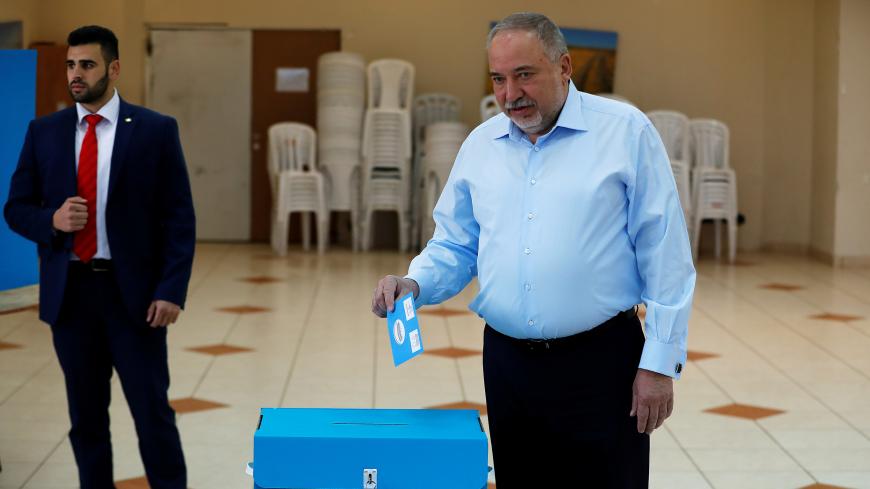 Avigdor Liberman, leader of the ultranationalist Yisrael Beitenu party, prepares to cast his ballot as he votes in Israel's national election at a polling station in the Israeli settlement of Nokdim in the occupied West Bank, March 2, 2020. - REUTERS/Ronen Zvulun

An initiative for the establishment of a minority government headed by Blue and White leader Benny Gantz and supported by Yisrael Beitenu’s Avigdor Liberman and the Arab Joint List party has been gaining momentum in Israel in recent days, thus further deepening political confusion in the country.

Liberman, the driving force behind this radical move, has been closely cooperating with Gantz and his associates, sharing the one and only goal of toppling Prime Minister Benjamin Netanyahu at any price.

The alliance being forged became public today, as Liberman and Gantz met in person in order to advance the formation of a narrow government. Options for such a government increased over the weekend, as Liberman removed his monthslong objection to cooperate with Arab Knesset members. Both Gantz and Liberman defined their meeting as positive, disclosing discussing guidelines for a minority government designed to lead Israel onto a new path and toward a new future. Liberman presented in the meeting his demands for limiting the intervention of the rabbinical establishment in the daily lives of Israeli citizens, and he also raised the issue of enacting a law for the enlistment of ultra-Orthodox men in the armed services. Gantz accepted both conditions.

The Gantz-Liberman meeting and apparent alliance enhanced the already high pressure within the political system, with speculation growing over ending the Netanyahu-rule era. Still, the road toward a minority government is still long, and the feasibility of establishing such a coalition isn’t high. The Arab Joint List is expected to demand of Gantz the cancelation of the Nationality Law and the rejection of parts of the Donald Trump Middle East peace plan, and it isn’t clear whether Gantz or Liberman could or would accept such conditions.

Gantz is also confronted with trouble at home, as two of his Knesset members — hawkish Yoaz Hendel and Zvi Hauser — reject any cooperation with the Arab party, claiming that its representatives support terror. Both men refuse to engage in any narrow government supported (even from the outside) by Arab legislators, generating a severe crisis within the Blue and White party. Without Hendel and Hauser, Gantz won’t be able to constitute a stable coalition and become prime minister.

Faced with this narrow government initiative, Netanyahu keeps reinforcing his right-wing, ultra-Orthodox bloc of 58 Knesset seats, even at the price of being pushed to opposition benches. Netanyahu’s main challenge is to prevent the disintegration of his bloc — a challenge he seems to be succeeding at for the moment. The prime minister also keeps insisting that he has won the elections and campaigns against the unfolding cooperation of Gantz with the Joint List. And so, the political imbroglio is far from being resolved.