Does Jewish-Arab partnership to form government stand a chance in Israel?

The Likud is continuing its campaign of incitement against Arab party representatives to head off their helping form a minority government led by Blue and White. 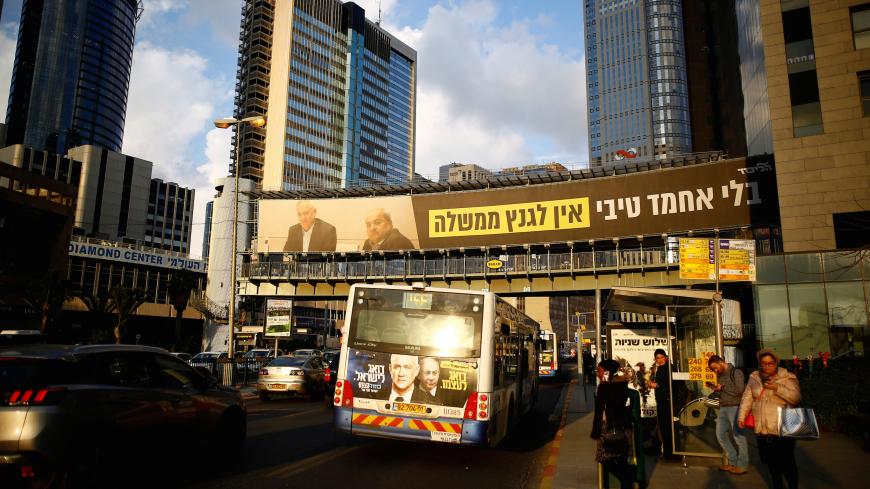 Israel's third round of elections in a year took place only a week ago, on March 2, and already at major intersections one sees huge billboards bearing the faces of Blue and White Chairman Benny Gantz and the leaders of the Arab Joint List, Ayman Odeh and Ahmad Tibi, along with the caption, “Yes to a Jewish and democratic state, no to supporters of terror.” The billboards, courtesy the Likud, remind you that elections in Israel are never really over. Thus the party headed by transitional Prime Minister Benjamin Netanyahu continues its campaign against the formation of a minority government that Gantz is trying to establish with the support of the Joint List.

Since the election, Foreign Minister Israel Katz has called members of the Joint List “terrorists in suits,” while Netanyahu did him one better and declared that Arab Knesset members are not part of the left bloc, since “Arabs are not part of the equation, and this is the will of the people.” Still, it seems that the incitement issuing from the ruling party’s workshop has actually benefitted the Joint List, whose support grew by two Knesset seats after the September elections, to a high of 15.

The irony of fate is that the formation of the Joint List arose from the initiative by Yisrael Beitenu Chairman Avigdor Liberman to raise the vote threshold in 2014 in an attempt to push the small Arab parties out of the Knesset. In addition, in the run-up to the March elections, a number of actions inflamed the mood among the Arab public, playing a significant role in the Joint List’s successful and spot-on campaign. Notable among them were the passage in 2018 of the controversial Nationality Law, declaring the Jewish nature of the state of Israel, the “Bibi or Tibi” campaign (i.e., either Netanyahu or a government ruled by the Joint List), and the crowning glory, the possibility of transferring the Arab cities in north-central Israel's Triangle region to Palestinian control as set out in President Donald Trump’s peace plan.

Will the Likud and the right’s callous and poisonous campaign, whose messages are escalating, lead to more extreme attitudes toward the Arab community and its Knesset representatives? It seems the answer is affirmative.

About 64% of Arab voters support the Joint List joining the government, but this idea faces strong opposition from the right-wing/ultra-Orthodox bloc and among large parts of the general public, including Blue and White voters. A Blue and White Knesset member told Al-Monitor that he prefers not to log on to his Facebook page, because he, like the rest of the party’s Knesset members and activists, receives a constant stream of curses and insults about the possibility of cooperation between Blue and White and the Joint List on legislation or in the formation of the government.

Adding fuel to the fire is the open opposition of Yoaz Hendel and Zvi Hauser, Blue and White Knesset members from Telem, to the possibility of forming a minority government that leans on the Joint List. Blue and White leaders themselves had argued until recently that they could not be part of a government supported by the Joint List because its members, so they claimed, don’t recognize the Jewish and democratic state. Now, as it has again become clear that without the support of the Joint List, including all of its factions, Gantz won’t be able to form a government, the tone has softened, Gantz has called leaders of the Joint List, and even Liberman is keeping quiet on this matter.

Is Israel in 2020 prepared for real cooperation between Jews and Arabs at the highest level? Israel’s first governments had at several times leaned on the support of the Arab parties, but those parties were more satellites of Mapai, Labor’s predecessor, than independent parties devoted to Palestinian nationalism. Prime Minister Yitzhak Rabin also depended on the support of Arab parties in 1992, a time when the national climate was completely different.

The Joint List, consisting of four separate parties, showed during the 20th Knesset, its first term, that it had no intention of hiding its opinions on the most burning issues and did not fear causing uproar. Thus, its decision to oppose the Arab League’s move to label Hezbollah a terrorist organization, its decision to refrain from signing a remainder agreement with Meretz and the refusal of Odeh to participate in the funeral of President Shimon Peres all well served the right, which has always feared a scenario of an alliance between the center-left and the Arab parties.

Over the years, there has been an increase in racists incidents toward the Arab community, “price-tag” and violent incidents, including physical assaults on Arab citizens. At the same time, 2019 saw a significant decrease in opposition among the Jewish public to including Arab parties in the government compared to in previous years. A survey by the Guttman Center for Public Opinion and Policy at the Israel Democracy Institute, headed by Professor Tamar Herman, showed that in 2019 50% of Jews expressed opposition to such a move compared to 66% in 2017, when it was only a hypothetical scenario.

Many of those who do not oppose forming such a government for racist reasons nonetheless have questions regarding the possibility of forming a narrow government that depends on the votes of Arab Knesset members. Some, for instance, are concerned for security reasons. Perhaps emblematic of this, on Feb. 24, Odeh declared that he wouldn’t support a government that would attack Gaza. There’s also fog surrounding the Joint List's position on Israel’s security budget and other issues. At this stage, Blue and White prefers to ignore these topics and instead focus on the central question for them: forming a government that does not include Netanyahu. At the same time, it is clear that without proper responses to these questions, it would be difficult to establish a real Jewish-Arab political partnership, which has been extensively discussed in the past year, as well as broader cooperation in the future between the Zionist and Arab parties.

It seems that a new and fascinating phenomenon is resulting in a real change in Jewish Israeli society. The Arab public longs for integration and for increasing its political influence to advance its interests and defend its rights. This striving toward “Israelization” and a shift in the traditional position on lending support to Zionist parties and cooperating with them are reshuffling the cards as far as the right is concerned. In response, the right is radicalizing the discourse and mobilizing all its regiments to block moves that endanger the continuation of its grip on power. The divisive and callous discourse is successfully inciting the fringe right, which is growing more radical, while in the center and on the left, the move by the Arab parties toward center stage is seen as a positive trend and is bringing more Jewish Israelis toward accepting it.

On key questions of security and the character of the state, it seems there won’t be agreement in the near term between the Zionist parties and the Joint List, which will make far-reaching cooperation difficult. For the moment, the two sides are trying to be as flexible as possible in the attempt to reach their common goal: forming a government without Netanyahu.