Has war between Iran and US already started in Iraq?

Iraqi officials condemned the recent US airstrikes that targeted not only Popular Mobilization Units but the Iraqi army and police. 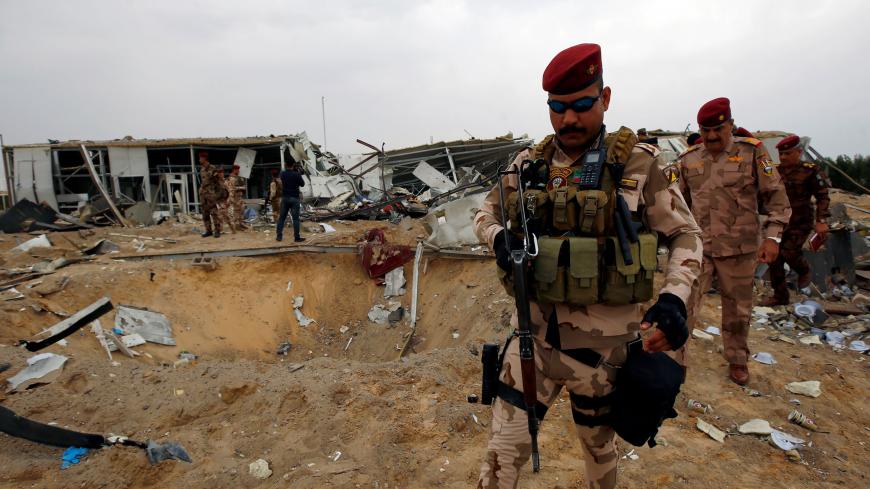 Iraqi security forces are seen at a civilian airport under construction, which, according to Iraqi religious authorities, was hit by a US airstrike, in the holy Shiite city of Karbala, Iraq, March 13, 2020. - REUTERS/Alaa al-Marjani

The United States launched airstrikes on several military bases of the Popular Mobilization Units (PMU) in southern Iraq early Friday. The strikes mark an escalation in tensions between the United States and Iran on Iraqi territory, putting Iraq at risk of becoming a site of war between the countries' proxies.

The US attack was retaliation for an attack on Camp Taji base in northern Baghdad March 11, which killed two American and one British soldier. Kataib Hezbollah and Nujaba Movement, though they did not take credit for the attack, praised it and expressed support for the perpetrators.

The United States had warned that it would take all necessary measures to prevent attacks on its forces in Iraq. “We will take any action necessary to protect our forces in Iraq and the region,” US Defense Secretary Mark Esper said.

Iraqi Joint Operations Command issued a statement immediately after the US attack March 13, stating that the United States had attacked the 19th Division of the Iraqi army, the headquarters of a unit of the Popular Mobilization Units, and the 3rd Babylon Police Regiment. The areas attacked include Jurf al-Nasr, al-Saeedat and Behbehani.

The attacks killed three Iraqi army soldiers, two policemen and one civilian, and injured five PMU fighters, according to the Iraqi Joint Operations Command. The infrastructure, equipment and weapons of the targeted locations were completely destroyed.

The command condemned the attack, describing it as a breach of “Iraqi sovereignty and in contrary with principles of cooperation and alliance between Iraqi security forces and US forces."

Though the Pentagon said that the attacks targeted five weapons storage facilities of Kataib Hezbollah militants, it is clear that other bases belonging to the Iraqi army and police were also targeted, although distinguishing between the PMU and other Iraqi forces is difficult due to the close cooperation and shared bases.

Iraqi officials criticized the attacks, including President Barham Salih. Interestingly, Salih mentioned “Iraqi security forces” in general, without mentioning the PMU. Salih had previously called the attack against US troops a “terrorist attack."

The Iraqi Foreign Ministry summoned US and British ambassadors to complain about the attack, as reports indicated that Britain was involved in the attacks against the PMU.

Kataib Hezbollah and Nujaba Movement slammed the US attacks and threatened revenge on US troops. However, Muqtada al-Sadr called for de-escalation to prevent more conflicts from coming to Iraq.

The Fatah Alliance, which is the political wing of the PMU, called for the expulsion of US troops from Iraq, stating that “there is no solution but ending the foreign forces' presence in Iraq.” Fatah and other blocs collected signatures to hold an urgent parliamentary session to discuss the US assault on Iraqi sovereignty.

The Iraqi street was not concerned about the attack against the PMU, which is understandable given the huge decline in PMU popularity amid the Iraqi protests that started last October. Some PMU members are accused of killing and abducting protesters.

However, the US targeting of the Iraqi army and police could bolster solidarity among Iraqis. In such circumstances, the best option for the United States would be to target PMU factions outside of Iraq and in Syria, for example. This would prevent an Iraqi backlash among politicians and citizens alike.