Have Iraqi religious centers contributed to the spread of coronavirus?

With the increase in the number of coronavirus victims in Iraq, the role of religious centers in curbing the spread of COVID-19 has come under scrutiny. 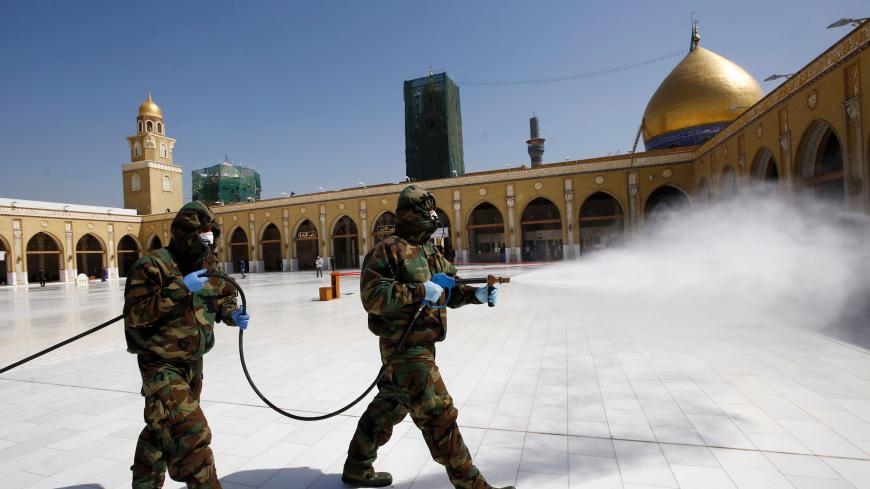 Civil defense team members spray disinfectant to sanitize the surroundings of the Kufa mosque following an outbreak of the coronavirus in the holy city of Najaf, Iraq, Feb. 27, 2020. - REUTERS/Alaa al-Marjani

The Iraqi Health Ministry has confirmed that the number of positive cases of the new coronavirus in the country has reached 35 and that two people have died. Experts, however, said that they think there are many more cases than this and that there will be many more to come. The Health Ministry does not have sufficient capabilities to control the numbers of infected people and prevent the spread of COVID-19, the experts added.

In such circumstances, religious gatherings in holy shrines, mosques and other religious centers have turned into a source of concern because of their potential role to accelerate the spread of the disease.

Although many religious institutions in this religiously conservative country have been reluctant to go quite as far as Jumail suggests, they have taken several precautionary measures. They also launched an awareness-raising campaign on the implementation of the measures to contain the disease.

On March 5, the office of the top Shiite cleric in the country, Ayatollah Ali al-Sistani, announced the suspension of Friday prayer this week. Sistani had previously requested that religious shrines be closed. Religious lessons at the Shiite seminary (hawza) in Najaf were suspended for an indefinite period and preparations are underway to repatriate foreign students to their countries. Other Shiite authorities have announced that they have closed their offices and that they will not be receiving visitors until further notice.

Not all religious leaders are going along, however. Shiite cleric Muqtada Al-Sadr has published videos on his Facebook page about his visit to the shrine of Imam Ali in Najaf, saying he does this daily to prevent the closure of the holy shrine. Sadr’s move stirred widespread criticism in the Iraqi street. Sadr’s act was compared to similar behavior in Iran, where the continued opening of shrines and the kissing and licking of shrines is believed to have contributed to a much greater spread of the coronavirus than there might have been otherwise.

On Feb. 27, the Iraqi Fiqh Council of Senior Scholars for Preaching and Fatwas issued an edict allowing the elderly and the young with weak immunity systems to miss Friday prayer in the mosque. The council also prohibited any person infected with the coronavirus from going outdoors in an effort to curb the spread of the disease. It further urged the concerned authorities to stop general and religious tourism.

The head of Balaghi Academy for inter-religious dialogue at the hawza in Najaf, Sayyed Zaid Bahrololom, said that despite the need to stop gatherings at religious shrines and centers to prevent the spread of disease, it is also necessary to encourage people to maintain spiritual and moral communication in other, safer ways. He emphasized the great role that religion and spiritual experiences play in helping the human body resist and fight disease.

Sheikh Abd al-Wahhab al-Samarrai, a member of the Fiqh Council and the imam and preacher of the Great Imam Mosque (Abu Hanifa Mosque) in Baghdad, told Al-Monitor, “The disease has yet to turn into a pandemic. If this happens, the procedures will be more stringent, and all religious gatherings will be fully suspended.”

For its part, the Chaldean Catholic Patriarchate of Babylon instructed its priests to adhere to several precautionary measures related to the coronavirus. Instructions included removing the bowl of blessed water at the entrance to the church, distributing the communion bread into the hands of the worshipers instead of in their mouths, avoiding handshaking and kissing in gatherings and stressing the need to wear protective masks.

The patriarchate said that if the disease becomes an epidemic, masses and activities will be canceled.

Cardinal Luis Rafael Saco told Al-Monitor that the patriarchate is following with interest all developments in order to raise the awareness of the parish and ensure its protection. “We ordered the distribution of health recommendations to various churches and their publication on the official websites of the patriarchate,” he said. Saco prepared a special prayer he wrote to beg God to end the disease.

Religious schools and institutions have been constantly publishing health and safety instructions in their centers. Officials at religious institutions, shrines and centers say there have been continuous efforts to sterilize and disinfect all halls, rooms, husayniyat (congregation halls) and mosques. Signs have been placed in all of these places asking the worshipers to refrain from shaking hands and kissing, which is a widespread practice during and after religious rituals.

In a meeting with Iraqi Minister of Health Jaafar Allawi. Sheikh Abd al-Mahdi al-Karbalai, the representative of Sistani, expressed his willingness to allocate a number of health centers affiliated with the religious establishment to be used as medical quarantine for those diagnosed with the coronavirus.

In the Kurdistan region, the KRG held a special meeting on the coronavirus March 4 and announced “the suspension of all religious ceremonies and activities in places of worship, including Friday sermons throughout the entire Kurdistan region until further notice.” The Union of Muslim Scholars of Kurdistan supported the government measures. Similar measures were also adopted in other Islamic countries. Saudi Arabia, home of the most important Islamic shrines, canceled all religious rituals to avoid the spread of the disease.

Meanwhile, many questions are being asked by Iraqi citizens in other regions. Why are the central and local governments not taking more strict and decisive measures, and why do some religious institutions seem reluctant to take strong measures against the spread of the coronavirus?