Iraqi authorities are taking strict measures to prevent the spread of coronavirus. 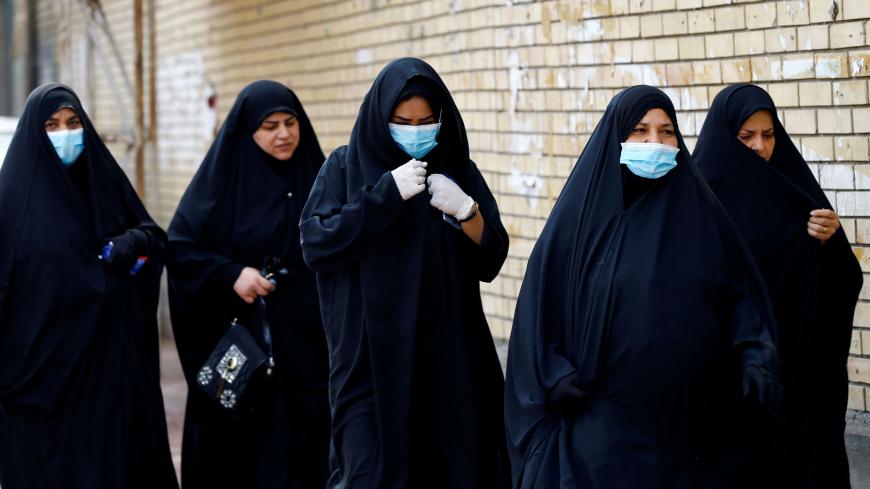 Shiite pilgrims make their way to Kadhimiya to mark the death of Imam Moussa al-Kadhim during a curfew imposed to prevent the spread of coronavirus, Baghdad, Iraq, March 18, 2020. - REUTERS/Thaier Al-Sudani

BAGHDAD — As coronavirus spreads across the globe, the number of infected people in Iraq is still manageable.

Though the country has taken strict measures to reduce infections, Iraqi officials are worried that the situation could deteriorate, and announced that other tight measures to prevent the virus' spread will be taken soon.

“We are still the best country in the world in terms of preventive measures against the coronavirus,” Iraqi Minister of Health Jaafar Allawi said.

He still expressed concern that “in the event of the high spread of the disease, as in other countries, we do not have the means to face it.”

The minister announced a new series of “strict measures [to last] up to three weeks to avoid danger.”

To ensure the implementation of decisions, Iraqi authorities created a crisis unit composed of the ministers of health, environment, immigration, education, higher education and interior, among others. The goal is to develop a comprehensive program to limit the spread of the virus. Every governorate will have its own unit linked to the central unit in Baghdad.

The crisis unit announced March 7 that flights from Iran and Italy would be halted; public stores will be closed, including cafes, restaurants, swimming pools, malls, cinemas and parks. Schools and universities will also be closed until further notice. Working hours will be suspended or reduced as needed, except for health and security institutions, which will continue to work full time.

The Iraqi Cabinet held a special meeting March 17 to announce a curfew in Baghdad starting that same day, as well as directing authorities to disinfect certain districts; authorizing governors to impose curfews; and banning travel between Iraqi provinces.

To implement these measures, the minister of health has conducted field visits alongside judiciary, religious and security officials, to galvanize efforts.

During his meeting with Allawi, Faiq Zaidan, the head of the Supreme Judicial Council, said that the judiciary will impose fines and “penalties on those who spread false information about the disease, take reckless measures or encourage people to gather in any form. People who fail to abide by the strict measures will be arrested in cooperation with the police, which follows up on the implementation of the curfew.”

Meanwhile, Ayatollah Sayyed Hussein al-Sadr, an influential Shiite cleric in Baghdad, met with Allawi and said he supported the unit's decisions. He said Iraqis need to abide by the health authorities' directives and to practice social distancing and not hold public gatherings. He urged everyone to take preventive measures to reduce the spread of coronavirus and avoid customs and traditions, such as kissing shrines, that “only lead to more injuries.”

Meanwhile, Muqtada al-Sadr criticized the closing of religious shrines and the disruption of prayers since such moves affect people's morale, he said.

In tandem with the central government's measures, Iraq’s governorates are taking additional measures, depending on their circumstances, to counter the virus.

Khaled Burhan Razouqi, the director of the Salahuddin governorate health department, deemed the central government's measures insufficient. He called for tight controls on border crossings and banning the entry of foreigners, especially those from areas with significant coronavirus outbreaks, in reference to Iran.

Razouqi said, “All forms of gatherings should be banned, especially religious gatherings, in addition to raising awareness to warn of the exacerbation of the disease and its transformation into a pandemic.”

No cases of coronavirus have been documented in the Salahuddin governorate due to the early and strict preventive measures taken by local authorities.

Ammar Hekmat, the deputy governor of Salahuddin, criticized the “poor coordination between Baghdad and the rest of the governorates,” stressing the need to “secure funds to support the security services, civil defense and health institutions.”

Hekmat told Al-Monitor, “A curfew law has been in force from March 18 until 21, subject to extension.”

Razouqi expressed concern about the rise in infections given Iraq's poor medical infrastructure. Hospitals will not be able to accommodate large numbers of patients and do not have adequate space for quarantine.

More than 160 coronavirus cases and 12 deaths have been reported across Iraq. Iraqi Kurdistan announced that it had 37 cases and one death.