If Iran can hold out long enough against COVID-19, Tehran and Washington might be able to come to terms. 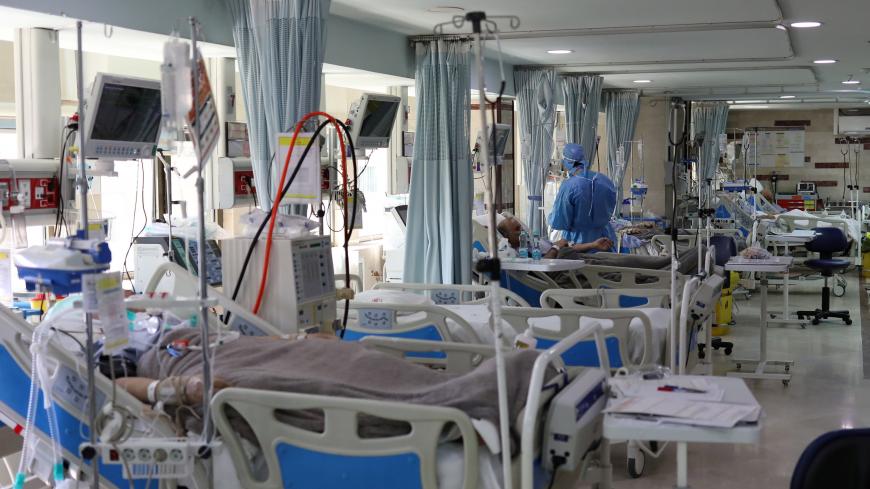 Patients with coronavirus disease (COVID-19) lie in beds at the ICU of Sasan Hospital, in Tehran, Iran, March 30, 2020. - WANA/Ali Khara via REUTERS

In the more than three months since it first was reported in China, the novel coronavirus has changed lives around the world dramatically. Its impact has stretched from micro-level social interactions to global functions, with many observers predicting it will effect lasting change on societies. Thus it is natural to question how it might influence the complicated rivalry between Iran and the United States.

The conflict has been more or less static since the assassination of Maj. Gen. Qasem Soleimani by the United States and the strike targeting Iraq’s Ain al-Asad military base by Iran in response. But could the coronavirus pandemic cause tensions to boil over again, or will it keep the crisis at bay for now?

Logically speaking, there are three possible paths for this crisis: escalation, de-escalation and the status quo. In any case, one factor is vital to consider: the economic consequences of the pandemic for Iran.

COVID-19’s impact on Iran’s already-pressured economy is no secret. The pandemic is reducing the government’s income and increasing expenses. During just the first three weeks of the pandemic, the government allocated about half a billion dollars to contain the virus’ spread and take care of infected patients. Also, when the Persian New Year vacation period concludes April 3, the government will probably have to pay grants to a large number of citizens who have lost their jobs or failed to earn enough money due to restrictions on internal travel and businesses.

The government has postponed the payments due for power and water bills in the whole country, and likewise for banking debts and loan installments. The sale of oil was expected to cover almost half of the country’s budget for this fiscal year, but the price plummeted since the start of coronavirus pandemic, dropping from $67 per barrel in December to well under $30 per barrel in late March, with the threat of continued price drops. Iran’s delicate economy will endure even more pressure in the coming months. And we should remember we are talking about an economy that, according to some sources, had already shrunk 22% during the last four fiscal years: Its gross domestic product went from 12.5% growth in 2016 to minus 9.5% in 2019, and in the first three quarters of the last fiscal year, some sectors saw a 16.6% decline, according to Central Bank of Iran data.

But what does that mean for the three possible directions of the crisis: escalation, de-escalation or status quo?

As for the first, there are two obvious signs from both sides favoring escalation. The first one came in the form of two rocket strikes the week of March 8 on Taji, an Iraqi military base housing international coalition troops. The strikes led to the death of one British soldier and two American troops, and more were injured. US officials blamed Iran, which denied any role in the attacks. Later, reports from a high-level meeting in the White House maintained military officials said they had no clear proof that showed Iran-backed groups were engaged in the attack, but these kinds of incidents usually indicate rising tension between the two sides.

The second sign, the response to the Taji strikes, came March 18, when the United States introduced further sanctions against Iran, targeting individuals and entities related to Iran’s petrochemical industry. For good measure, the US added even more sanctions on March 26, aimed at companies and individuals for allegedly supporting terrorist groups.

There is also considerable evidence to support the next possible direction, de-escalation. Before Taji, the last time an attack on American targets in Iraq led to the death of American citizens, President Donald Trump responded with several strikes against Iran-related targets in Iraq, including one that led to Maj. Gen. Soleimani's assassination. The relative restraint, which was shown this time, could be interpreted as a strong sign of de-escalation.

Another would be the ongoing anti-sanctions campaign Iranian officials introduced after the COVID-19 pandemic surfaced. Iran says the sanctions have impeded its ability to import equipment vital for controlling the pandemic. Thus, a broad campaign was started to call for removing sanctions. This collective effort included was but not limited to: Iranian Foreign Minister Mohammad Javad Zarif wrote a letter to UN Secretary-General Antonio Guterres; Iranian President Hassan Rouhani issued a message to the people of America; 235 Iranian artists wrote a letter to their global counterparts; and Iranian activists, scholars and intellectuals — many of whom are based abroad and part of the opposition to the Iranian state — wrote to Trump.

They all criticized “inhumane sanctions” they said endanger the lives of millions of Iran’s citizens and could worsen the global spread of the pandemic. An influential Iranian cleric has even written Pope Francis, urging him to help get the sanctions lifted.

Russia and China also publicly rejected the sanctions. British Prime Minister Boris Johnson made a private request to that effect and US Rep. Ilhan Omar, D-Minn., called the sanctions “supervillain-level cruelty.” Nine US legislators signed a letter urging Trump to suspend the sanctions in the wake of the coronavirus.

Despite the campaign’s broad reach, it has not been effective so far, and the United States insists that its sanctions aren’t interfering with relief efforts for Iran.

There are also signs indicating that the third potential direction, maintaining the status quo, could be the most likely path taken. Iran’s refusal to accept US aid, coupled with Supreme Leader Ayatollah Ali Khamenei’s notion that suggested the United States might have a role in "producing" the coronavirus, could be considered efforts to maintain the current distance between the two rivals using the coronavirus issue. And Washington’s persistence about maintaining the sanctions despite pressure from many world leaders, including its allies, demonstrates that the United States may be intent on keeping the status quo. As for Iran, it has called on the United Nations, the world’s citizens and, ironically, the people of America, but it has not asked the US administration directly to withdraw the sanctions or reduce tensions in bilateral relations.

Under the shadow of the third scenario, one can argue that Iran’s government is trying to buy time until the US presidential election in November, for an obvious reason: The COVID-19 pandemic could turn out to be a disaster for Trump’s campaign. According to many polls and analyses, Trump’s popularity in the runup to the November election will be heavily affected by his administration’s performance during the coronavirus crisis. Some analysts believe that even regardless of that, the economic consequences of the pandemic could prevent the president from taking office a second time.

Iran's leaders hope that means they won’t have to deal with Trump again, and that therefore, it’s worth keeping the status quo until November. If the US president is anyone except Donald Trump in January 2021, then Iran can sort out its differences with the great power while keeping face and credibility. Of course, that heavily depends on Iranian leaders’ ability to find enough resources to run the country during the coming months. The officials are trying; they have asked for a $5 billion loan from the International Monetary Fund, marking the first time the country has sought relief from the IMF in 50 years. Rouhani has requested $1 billion from the National Development Fund to fight the coronavirus. The anti-sanctions campaign apparently has led some countries to release some of Iran’s blocked funds despite the US mandate.

One way or another, the COVID-19 pandemic is going to affect many aspects of world foreign policy. Paradoxically, it may help maintain the relatively stable status quo in Iran-US tensions.