President Hassan Rouhani claims Iranian assets abroad could soon be unfrozen, but US has no plans to lift sanctions. 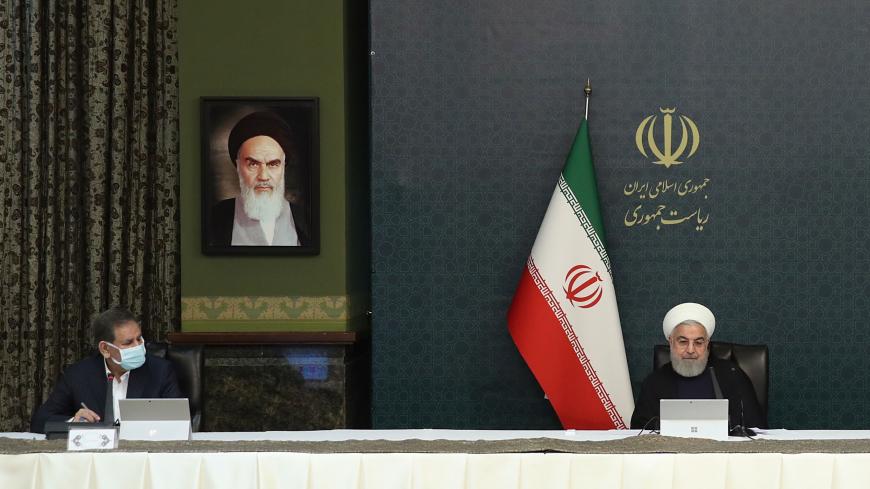 Iranian President Hassan Rouhani (R) makes a statement during a Cabinet meeting at which all of the participants, except Rouhani, wore medical masks, Tehran, Iran, March 25, 2020. - PRESIDENCY OF IRAN / HANDOUT/Anadolu Agency via Getty Images

Iran’s President Hassan Rouhani told a Cabinet meeting March 25 that “good steps” have been taken to unblock Iranian cash withheld in different countries due to US sanctions. Iran hopes the relief will help it overcome the ongoing coronavirus epidemic that has mounted an exponential hike over the past five weeks. Rouhani quoted an unnamed nonpermanent member of the UN Security Council as saying that a proposed resolution on Iran sanctions removal was in the works before being presented to the body.

The relief, according to Rouhani, is coming thanks to the Iranian Foreign Ministry’s efforts to “mobilize the world public opinion for a "no to sanctions" campaign. Iran’s top diplomat, Mohammad Javad Zarif, known for his active public diplomacy, has spearheaded the campaign. In his lastest tweet, Zarif urged world leaders to observe a “moral and pragmatic imperative” by defying “US mass punishment.”

Rouhani’s hopes were echoed by the head of Iran’s central bank, Abdolnasser Hemmati. “We have been informed that financial resources frozen due to US pressure could be released … which we will spend on procuring basic supplies, medicine and medical equipment,” he said.

Since the outbreak of COVID-19 in Iran last month, the country’s officials have complained that US sanctions are significantly impeding the treatment process, leaving patients in need of international aid.

US sanctions allow exceptions for medical supplies, including through the recently established Swiss humanitarian channel. Rouhani has repeatedly spurned US offers of assistance to address the COVID-19 crisis.

Yesterday Iran asked a team of nine doctors dispatched from Doctors Without Borders (MSF) to leave the country, despite having landed in Iran with the necessary domestic permits from the ministries of health and intelligence. The official explanation cited sufficient capacity at home that would make the MSF mission for a field hospital of 50 beds unnecessary.

In another development, the Iranian military announced it is prepared to set up over 8,000 beds to enhance existing medical infrastructure. And an Iranian company said it has established a production line of indigenous testing kits, the shortage of which has slowed down the diagnosis of infected individuals. Yet few signs indicated that Iran was flattening the curve. The country reported 143 new deaths March 25, bringing the tally to 2,077 as the confirmed cases passed the 27,000 mark.

In its latest measures to contain the epidemic, the Rouhani government adopted an even stricter approach, ultimately heeding warnings that the epidemic’s magnitude could reach catastrophic levels, given its coinciding with the new year holidays — Iran’s most popular traveling season. According to a new directive from the president, draconian measures will now be imposed on all departure points in Tehran, the province with the highest mortality rate.

Nevertheless, the new guidelines arrived in the middle of the new year holidays and, given the absence of any robust travel ban, many Iranians had already hit the road. The government avoided calling the new measures a “lockdown” or “quarantine.” Rouhani officials initially dismissed such measures as “World War era” practices no longer effective in confronting a modern epidemic.