As the coronavirus marches across Iran, the Islamic Revolutionary Guard Corps has claimed that its research teams are set to produce a vaccine. 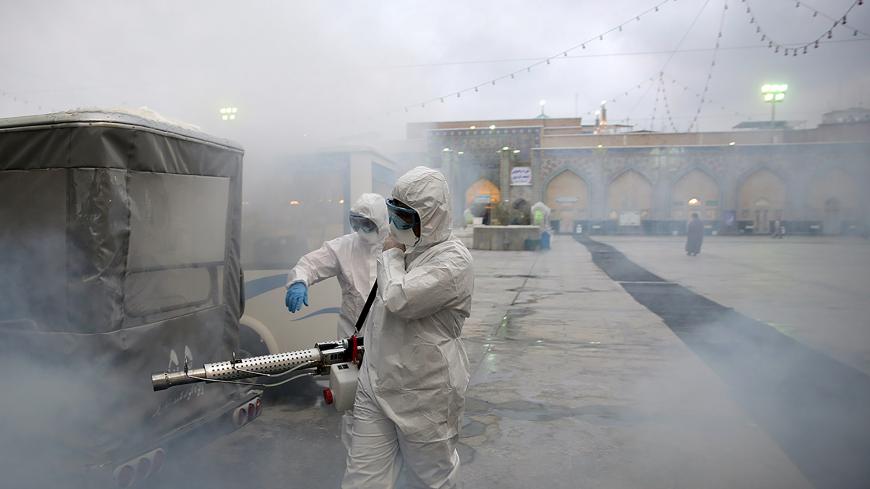 Members of a medical team spray disinfectant to sanitize the shrine of Imam Reza following the coronavirus outbreak in Mashhad, Iran, Feb. 27, 2020. - WANA via REUTERS

A medical research center affiliated with Iran’s Islamic Revolutionary Guard Corps (IRGC) says it is testing a vaccine that promises to eradicate the killer coronavirus. According to Brig. Gen. Alireza Jalali, the president of Baqiatollah Medical Sciences University, the vaccine is awaiting permits from Iran’s Food and Drug Organization to enter the clinical phase.

No further details have been released on the vaccine. But in a statement March 4, the Food and Drug Organization “strongly denied” all recent “reports and rumors” on social media that had claimed a breakthrough in the fight against the virus. Still, the organization, which has the final authority on the production and distribution of medicines in Iran, did not make specific reference to the IRGC announcement.

The IRGC is also working to develop its own testing kits within 12 months. The scarcity of testing kits has been one of the impediments to proper handling of the outbreak in Iran.

Last week, Health Minister Saeed Namaki confidently declared in a letter to Supreme Leader Ayatollah Ali Khamenei that Iran will soon “astonish the world by bringing the virus to its knees.” Only two days later, he was lamenting domestic hoarding of medical supplies and how it is depriving ordinary Iranians and his colleagues at hospitals of face masks and other badly needed protective equipment.

As of March 4, there were unconfirmed reports that First Vice President Is’haq Jahangiri and Minister of Industry, Mine and Trade Reza Rahmani had tested positive for the virus. The same day, the updated official death toll surged to 92 as the community of the infected Iranians topped 2,900. The highest-ranking official to have cast doubt on the daily statistics was pro-Reform Deputy Parliament Speaker Masoud Pezeshkian. A former health minister himself, Pezeshkian lashed out at the government for refusing to impose a lockdown on the city of Qom, which has been Iran's epicenter of the disease.

In their latest containment measures, the authorities extended the unprecedented cancelation of Friday prayers in the provincial capitals for a second consecutive week. The sermons have traditionally been the key podium for the Islamic Republic to elucidate its political ideology and a venue for slogans against its top enemies, Israel and the United States.

On the front lines in the overcrowded and chaotic hospitals, Iranian nurses attend an increasing number of patients and fight the virus often unprotected and unequipped. Nevertheless, they are also going the extra mile to stay cheerful and spread optimism among their communities. One trending social media campaign is a “dance challenge.” As dancing is banned in the Islamic Republic, medical workers are using their masks and gowns to hide their identities while dancing to lift the spirits of a shocked and distressed society.