Intel: Pompeo calls on Syria to release US prisoners amid coronavirus fears

Secretary of State Mike Pompeo today urged President Bashar al-Assad to release all “arbitrarily detained” Syrians and US citizens amid fears that the coronavirus pandemic is primed to rapidly take hold and spread throughout the war-torn country. 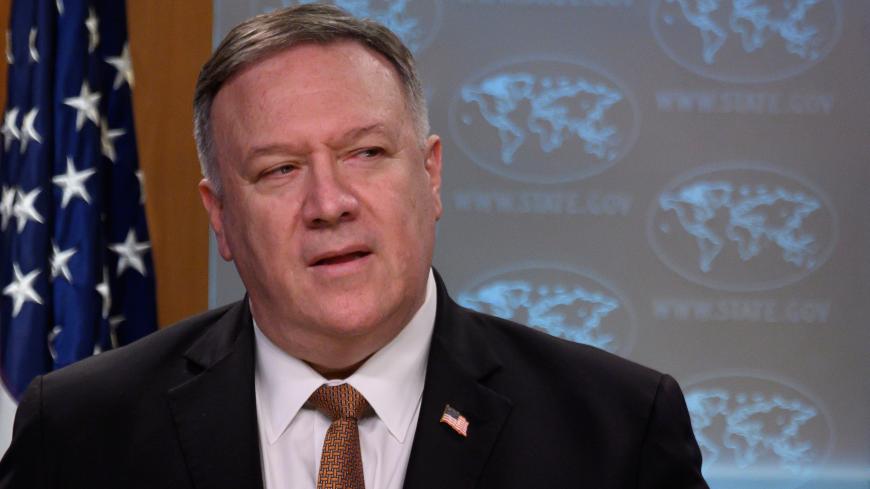 US Secretary of State Mike Pompeo speaks during a news conference at the State Department in Washington, March 25, 2020. - Andrew Caballero-Reynolds/Pool via REUTERS

Secretary of State Mike Pompeo today urged President Bashar al-Assad to release all “arbitrarily detained” Syrians and US citizens amid fears that the coronavirus pandemic is primed to rapidly take hold and spread throughout the war-torn country.

“We have asked the Syrians to release all those who are wrongfully detained — not only Americans, but others as well,” Pompeo told a small group of reporters. “We’re calling on the Islamic Republic of Iran to do the same at this time, where there is enormous health risk to these individuals, on a purely humanitarian basis.”

Pompeo also noted that he discussed Syria on a teleconference call today with fellow foreign ministers from the Group of Seven leading industrialized nations — a group that comprises the United States, Canada, Britain, France, Germany, Italy and Japan.

“We also spent time discussing Syria, where the Russians, the Iranian regime, Hezbollah and the Assad regime are strengthening Europe with a humanitarian disaster and preventing a political solution,” said Pompeo.

Why it matters: Syria is believed to detain at least two Americans: the journalist Austin Tice, who went missing in 2012, and Majd Kamalmaz, a psychotherapist detained since 2017. Syria has confirmed five coronavirus cases so far, prompting fears that the country’s dense prison population, displaced populace and the ongoing war has created a volatile situation rife for the pandemic to spread.

"In light of threats posed by COVID-19, the United States reiterates its calls for the Assad regime to take concrete steps to protect the fate of thousands of civilians, including US citizens, being held arbitrarily in overcrowded and inhumane conditions in regime detention centers,” State Department spokeswoman Morgan Ortagus said in a statement.

“We’ve gotten rid of the [Islamic State] caliphate in Syria,” said Trump. “We’ve done a lot for Syria. … It would be very much appreciated if they would let Austin Tice out immediately.”

What’s next: Tice’s whereabouts have remained unknown for years, and the United States recently lost track of Kamalmaz’s whereabouts because he has been transferred to an unknown location inside Syria. The United States and Damascus also do not maintain a direct line of communication, making negotiations difficult.