Iran’s coronavirus has no politics and can’t be contained

UAE, Gulf take proactive steps to get ahead of outbreak, but region is already paying a heavy price. 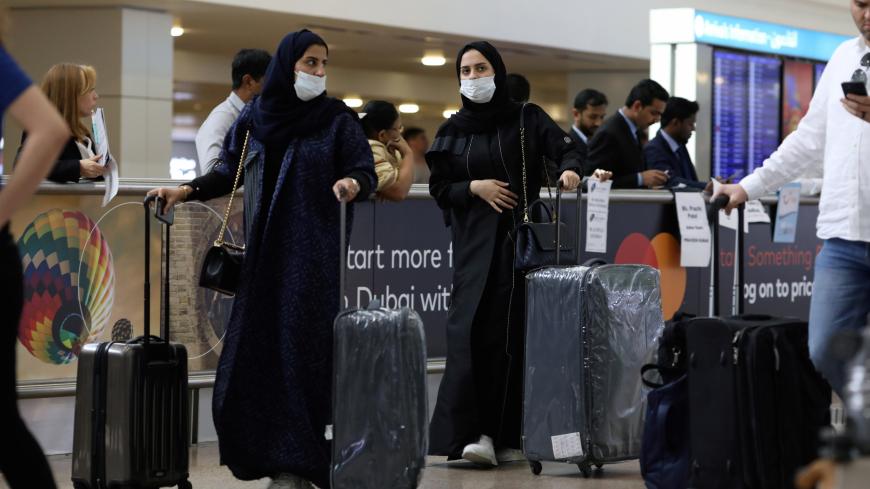 Travelers wear masks as they arrive at the Dubai International Airport, after the UAE's Ministry of Health and Community Prevention confirmed the country's first case of coronavirus, in Dubai, United Arab Emirates Jan. 29, 2020. - REUTERS/Christopher Pike

On March 2, the United Arab Emirates facilitated an air shipment from the World Health Organization to Iran of medical supplies to help quell the coronavirus outbreak and, two days later, evacuated a student group of Arab foreign nationals from China, in an agreement with the Chinese government. Saudi Arabia last week decided not to issue of visas for pilgrims to Mecca. With these actions, both humanitarian and wise, the Gulf states are setting an example for what could soon be an official viral epidemic in the region, mostly generated from Iran, their main adversary.

Whatever the political tensions with Iran, Abu Dhabi and others in the region reflect the insight that global disease response is not a contest; no state wins for the lowest contagion count or fewest deaths. All governments will struggle to respond, but some will choose testing policies and communication strategies that make the rest of us safer, and they should be commended and replicated. The coronavirus will affect everyone and every economy. It is already changing our consumer and social behavior, underscoring the interdependence of our global economy from supply chains to the transmission of market anxiety.

For those who distrust globalization and promote nationalist or autarkic political agendas, the crisis is gold. But they are no better protected, as it is already clear that the COVID-19 virus will not be contained to one country or region. In fact, it was the sharing of information, the provision of supplies and technical expertise in a coordinated international institutional response that helped quell the spread of disease in the past. Most people in the world are healthier, more wealthy and better informed because of connected markets, international institutions and globalization.

Gulf economic impact of the coronavirus

Here’s what we know: Even in best-case scenarios of economic impact for 2020, this year will be difficult. It will be especially difficult for some developing economies, many of them in the Middle East, and hardest on commodity producers. Developed markets will face supply chain problems from production in China. Reduced spending by Chinese tourists will affect other countries unevenly, but the airline industry as a whole will face considerable losses.

Chinese travel spending generates 0.30-0.35% of annual global GDP, double the amount that the US generates, according to Johns Hopkins and Goldman Sachs Global Investment Research. Even if Chinese tourists do not make up a major proportion of the tourist population in many Middle East states, the impact to the travel industry at large is deep and Gulf carriers will be no exception. In Lebanon, tourism accounts for 14% of GDP and nearly 4% in Egypt. Though Chinese visitors are a fraction of visitor populations to Egypt and Lebanon, the regional risk and damage to transportation links and the rising use of travel bans will weaken already vulnerable regional economies. For the UAE, Chinese tourists account for nearly 6% of total visitors, and Expo 2020 planned for later this year had expected a large Chinese contingent.

According to data from S&P Global Ratings, in direct trade Saudi Arabia’s exposure to China is significant, with close to 5% of Saudi GDP made up of merchandise exports to China. Oil exporters are especially vulnerable, as global demand is extremely weak and the Gulf Arab states have concentrated their export relationships to the east. Qatari gas makes up 16.8% of China’s gas imports and Saudi oil accounts for 12.4% of China’s oil import mix. Omani oil makes up about 7.2% of China’s oil imports, but Omani exports to China make up 45% of Oman's total goods exports and a whopping 78% of Oman’s oil exports were destined for China in 2019, according to reports from Standard Chartered.

A bad year gets worse

2020 was already a challenging year for Gulf oil exporters with persistent fiscal deficits, growing debt service obligations, soft oil demand and a backlash of global investors less interested in potential privatization in the oil sector. Now those expectations look rosy, as new projections see global oil demand declining this year. And it’s not just because China is not at full productivity. It is the market anxiety that is crushing demand for transport fuel. 2020 looks worse than both 2009 and 2015 for Gulf energy exporters, and there are now fewer fiscal levers in place to create economic stimulus. Gulf governments are likely to return to international debt capital markets, but there is little to suggest that the borrowing spree of the last few years has done much to stimulate growth.

In Saudi Arabia, a roughly 20% increase in public debt as a portion of GDP from 2014 to 2019 has been met with an average growth of 1.5% of GDP in the same five-year period, according to research by S&P Global Ratings. The debt strategy has not been a successful growth strategy, but rather a way to tread water in the face of economic diversification and social liberalization efforts. The few success stories in economic diversification rely on open markets, tourism and the privatization of sectors that will be hard hit by the coronavirus: health care and education.

Moreover, the political risk factors that failed to shock oil markets starting with the summer 2019 tanker attacks, then the targeting of Aramco oil facilities in September, to the January killing of Iran's Qasem Soleimani in Iraq now contend with a true black swan event. Fear of disease contagion that will likely kill very few on a global scale now amounts to a greater economic risk than an outright war between Iran and the United States. This is the brutal irony and sad lesson of the last year in the Gulf. The anticipated confrontation with Iran led by the US administration turned into a debacle, with the Gulf Arab states left exposed to more risk and fewer assurances of American protection. Iran is now more a neighborhood liability than a global concern.

The coronavirus' impact in Iran is dire and underscores the assessment of Saudi Arabia and the United Arab Emirates that an imploding Iranian regime with desperate citizens and ruthless military leadership is not a desired outcome. For those who support the US "maximum pressure" campaign, there is now a decision point. It is one thing to advocate for regime change in Iran and force its economic and political collapse. That approach demands a plan, and an international coalition committed to rebuild Iran’s political leadership and reintegrate its economy into global markets. It is another to deny the intention of regime collapse and watch gleefully as people suffer the consequences of a failed political system unable to care for its citizens in the face of a pandemic.

I know, because I have heard analysts in Washington speak about Iran’s current economic and health crisis as if it had no effect on US interests in the Middle East or on our own domestic economy and security. I spoke on a panel at AIPAC on March 2 in which a co-panelist cheered the failure of Iran’s disease response as some kind of just reward. By March 5, AIPAC announced there may have been a risk of contagion from some participants in the conference.

There is no insulation from the current crisis; it has no politics. This outbreak and our national and global institutional responses should be a lesson. Good neighbor policy is an understanding of shared risk, a maturity that does not allow hubris at the misfortune of one’s adversaries.