Egyptians are arguing among themselves on a new study that has recreated the voice of a 3,000-year-old mummified Egyptian priest. 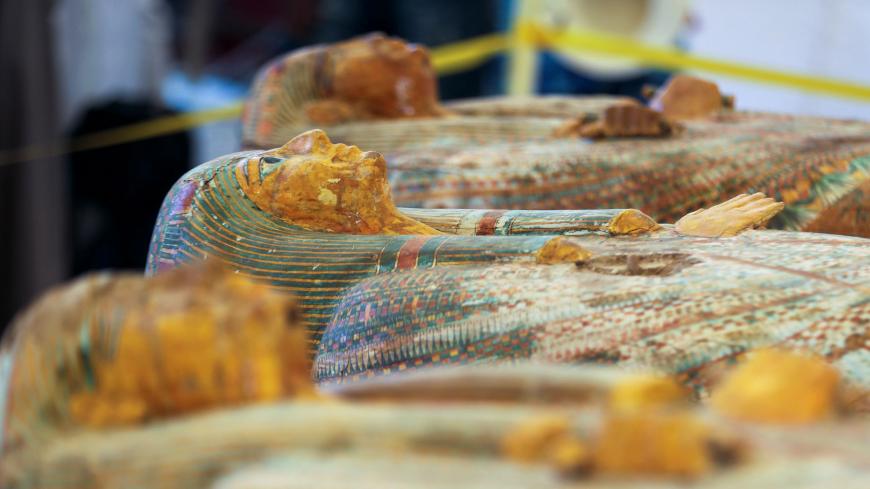 CAIRO — The voice of a 3,000-year-old mummified Egyptian priest, recreated by researchers at the Royal Holloway University of London, has created an echo in Egypt’s parliament. A parliamentarian accused Egyptian scientists and archaeologists of just standing by and watching as other countries made discoveries on Pharaonic civilizations.

Parliamentarian Shereen Farrag criticized the ministries of Archaeology and Education for not making similar discoveries.

"While European scientists are revealing the secrets of Pharaonic Egypt from a single Egyptian mummy, Egyptian scientists and authorities, who are in possession of hundreds of mummies, are [late] in the discovery of the secrets of our own ancient civilization," she said in a March 3 statement.

Farrag told Al-Monitor that the two ministries are not interested in conducting scientific experiments on mummies. “They just promote discoveries and display them in museums," she said. "Meanwhile, foreign universities and research centers conduct ongoing experiments on the antiques to reveal more secrets about the Pharaonic civilization. They are the ones who make use of new technological applications to give a more accurate image of the lives of Pharaohs, including the voices of these symbols.”

A team of researchers affiliated with the Royal Holloway University of London and headed by scientist David Howard replicated the voice of a mummified Egyptian priest, called Nesyamun, according to the experiment published in Scientific Reports Jan. 25.

According to the abstract, the scientists were able to measure the dimensions of the mummy's vocal tract and then use a tool that "provides a user-controllable artificial larynx sound source" to recreate Nesyamun's voice.

The experiment began in 2016 on the mummy, which has been in the Leeds Museum in the UK for more than two centuries. Howard and his team had used the same technique to recreate the voices of living people. Howard noted that the team chose Nesyamun because the soft tissues in his larynx and vocal tract were relatively intact.

The discovery has provoked respect and envy in Egypt, as well as efforts to downplay its significance.

Mohammad Ahmad, a physics professor who specializes in voice studies at the University of Cairo, told Al-Monitor that the voice naturally comes out of the mouth after air hits the curvatures of the vocal tract, the larynx and the vocal cords. “The voice of a mummy can be accurately reproduced if the air path is retraced," he said. "If Howard and his team succeeded in designing the tongue and teeth, then vocal recordings of the mummy could be recreated.”

Howard and his team chose to replicate a sound close to the words “bad” and “bed,” as they are not affected by the mouth and teeth, which the mummy did not have. The tissues of Nesyamun's tongue had decomposed before the mummy was discovered. Historians said he died around the age of 50, and his teeth and gums were severely damaged to the extent that he had perhaps lost all his teeth.

Mostafa Waziri, the secretary-general of the Supreme Council of Antiquities of Egypt, which is affiliated with the Ministry of Antiquities, brushed off the experiment as hocus-pocus.

“News about replicating the voice of Nesyamun is all hocus-pocus,” he told Al-Monitor, reacting to the remarks of Farrag. “This is not the first time such an incident happens. The red mercury discovery [by the Soviet Union in the 1980s] caused an increase in grave robbers when it was claimed the mercury was found in the neck of a mummy. It was sold for millions, and it was just hocus-pocus.”

Waziri was referring to the myth that "red mercury" — a fictional substance said to have healing powers — had been found in the mouths and necks of ancient Egyptian mummies. The myth first appeared in the Soviet Union and then spread around the world. At the time, Egyptian scientists and archaeological authorities denied the existence of red mercury, saying it was the result of oxidation of the remaining fluids in the tomb.

“Mummies contain natural material like cinnamon and acacia and resin material to preserve them," Abdul Hamid Kafafi, a professor of antiquity restoration at Fayoum University, told Al-Monitor. "Resonance and trans-sectional rays, if combined with materials, might not give exact results as those with living beings. Mummification does not preserve the body 100%. Consequently, Nesyamun’s replicated voice cannot be the same as the one he had when he was alive.”

John Schofield, an archaeology professor at the University of York and the co-author of the study, told the BBC that they hope to eventually use computer models "to generate words and string those words together to make sentences."

"We're hoping we can create a version of what he would have said at the temple at Karnak," he continued.

An expert in mummy restoration told Al-Monitor on condition of anonymity that Egyptian authorities' objections and skepticism of the discovery cannot overshadow that this will likely attract thousands of tourists to the Leeds Museum.

​He said Egypt trails behind in using technological applications like magnetic resonance or 3D printing because fatwas ban the excavation of corpses from Pharaonic tombs. Just imagine what religious authorities would think of scientific experiments on these corpses, he said.

The Islamic Research Academy affiliated with Al-Azhar issued a fatwa in November 2017 prohibiting the extraction of Pharaonic mummies from tombs, as well as their display in museums, because “these actions desecrate the sanctity of death, which many Quranic verses and prophetic words insist on respecting.”

But Ahmed Abdul Raouf, professor of forensic medicine at Tanta University, told Al-Monitor that replicating the voices of Pharaohs is controversial scientifically, regardless of religious beliefs.

He said that mummies' vocal tracts cannot reproduce an accurate voice for several scientific reasons, as well as the changes the body undergoes even a few hours after death. For example, the pores that partially absorb the air that goes through the vocal tracts are blocked; saliva dries up in the throat; and tissues stiffen due to the interruption of blood circulation. It is unlikely, he said, that the voice created resembles that of Nesyamun.