The Egyptian authorities have come under heavy criticism for charging high fees for the coronavirus tests poor workers need to travel. 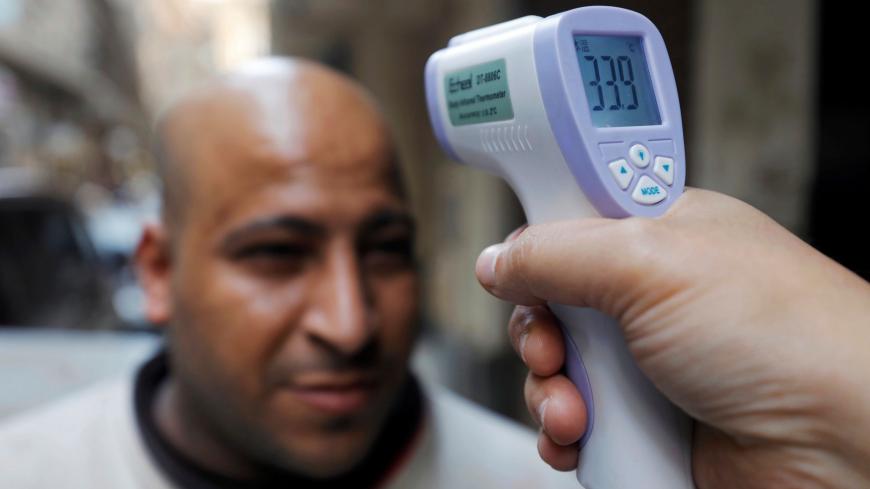 A passer-by has his temperature checked for free by a shopkeeper during the coronavirus outbreak, Cairo, Egypt, March 19, 2020. - REUTERS/Mohamed Abd El Ghany

Egyptian activists denounced the government for allegedly seeking to make money off poor laborers working in the Gulf. The hashtags “saboubet corona” and “sabouba” trended for days on social media. The word “sabouba” in Egyptian slang means a “quick buck.”

Several Gulf countries including Kuwait, Qatar, Oman and Saudi Arabia had imposed restrictions on visitors from Egypt, demanding certificates from the Egyptian Health Ministry proving they were not carriers of the virus. They stipulated that testing had to be done and authenticated by the Health Ministry within 24 hours prior to arrival to their states.

The Health Ministry offered testing for 1,050 Egyptian pounds (about $66), high fees for Egyptians, especially poor laborers. Results take three or four days. Quicker testing in a matter of hours is available for 2,500 pounds (about $158).

“The cost is high compared to the low income of Egyptians. I call for using part of the 100 billion Egyptian pounds (about $6.3 billion) the president allocated for handling the pandemic to offer the test for free, at least to those who cannot afford it,” Ghattas told Al-Monitor. “We are talking about a number of family members getting tested at once,” he added.

As the scene outside the Health Ministry's laboratories remained chaotic for days, social media users ridiculed the crowds for waiting on the street with no precautionary measures.

Independent journalist Selim Azouz tweeted March 8, “To the authority of a quick buck … the countries that required… certificates proving Egyptians traveling there were free of the virus … should not be turned into easy money. … Enough.”

Another Egyptian user tweeted, “We are the only country that treats any crisis as a chance for a quick buck.”

One video showed people outside the lab sharing water from a single bottle.

“I have been waiting here since 6 a.m. to get tested. The test is very expensive for us. We worked in the Gulf because we couldn’t make a living in our homeland. This is not the way the government should treat us,” one worker told Al-Monitor on condition of anonymity while queuing with his family outside the laboratories of the Health Ministry in downtown Cairo.

Ghattas called for allowing hospitals affiliated with medical schools around the country to take the test, arguing, “The clinical professors working at those hospitals are the ones who taught the health minister herself.”

However, the situation has changed significantly since Egypt suspended all international flights as of March 19 through March 31 and most of the Gulf countries closed their borders. Thousands of Egyptian workers who got tested at the labs were left unable to travel anyway.

Ghattas also voiced concerns over the efficiency of the Health Ministry's measures to combat the epidemic, questioning the government’s crisis management strategy.

“What happens now are decisions being made as the need arises rather than a clear strategy,” argued Ghattas.

For weeks, Education Minister Tarek Shawky has insisted on keeping schools open against the wishes of worried parents. A few days before schools were finally closed, Shawky said that students should keep one meter of distance from each other, remarks that stirred ridicule on social media.

“I wonder whether he has ever visited the public schools where there are over 80 students in each class,” Ghattas said.

Following the premier’s decision to temporarily shut down schools and universities, Shawky praised the “wise” call that came “just in time.”

“The government has been making decisions, always followed by further adjustments,” Ghattas said.

“For example, there are 300 families quarantined in their homes in the Nile Delta’s Dakahlia province. We don’t have enough information about the situation there,” he said. “The government needs to be more transparent with regard to the crisis.”

The governors of the Red Sea and South Sinai governorates locked down hotels and resorts in Sharm el-Sheikh and Hurghada, placing tourists and workers under 14-day quarantine there.

Egypt, a third-world country of about 100 million people and a flawed health care system, has been subject to widespread criticism for taking no effective precautionary measures to vet arriving passengers from abroad for fear of harming tourism, a major contributor to the fragile national economy. Critics speculated that the government was keeping confirmed coronavirus cases under wraps for economic reasons.

Since the first case was announced in mid-February, the government has been taking disjointed measures to address the problem.

Schools, universities, cinemas and theaters have now been closed and prayers at mosques and churches halted. People were asked to avoid public gatherings, restaurants and cafes. Thousands of public and private sector employees were offered paid leave.

Demand across the country for disinfectants, soap and face masks has surged and prices have skyrocketed as a result.

The situation spiralled further out of control as Egyptians started hoarding groceries to the extent that many stores are now almost empty of basic commodities.

As of March 18, the Health Ministry has reported 210 cases of infection, with a death toll of six and 28 recoveries.

“All the newly reported cases are in isolation in hospitals undergoing medical treatment in accordance with the World Health Organization’s guidelines,” Health Ministry spokesman Khalid Megahed was quoted by the state-owned Al-Ahram newspaper as saying.