The joint military patrols mandated by the Russia-Turkey cease-fire are in effect, sparking protests and dividing the Syrian opposition. 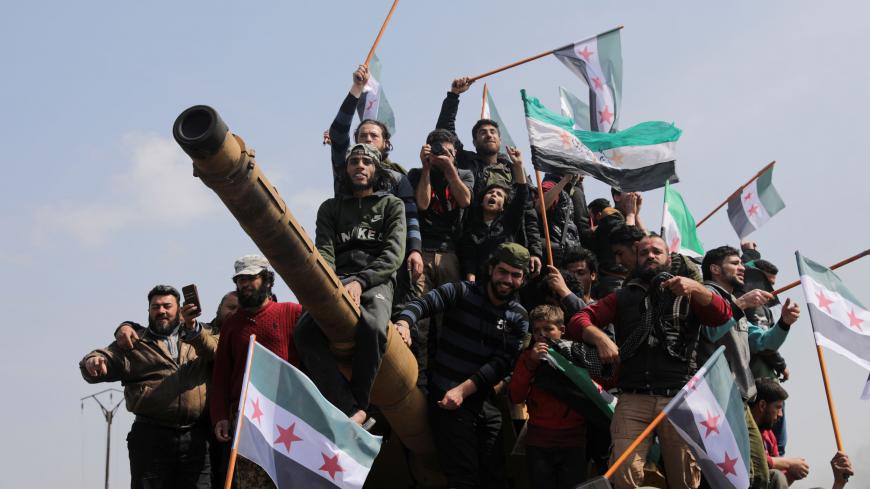 ALEPPO, Syria — The Turkish forces and Russian military police conducted their first joint patrol mission on the M4 highway in Idlib March 15. The move comes as part of the countries' implementation of a March 5 cease-fire agreement. Yet the patrols were met with popular rejection and created division among the Syrian armed opposition.

Russia’s Defense Ministry said March 15 the patrols on the M4 highway were cut short at the Turkish forces’ request, stating that “terrorist groups” were using civilians as human shields. The ministry added that it has given Turkey more time to create safe conditions for the patrols on the M4, which runs from Aleppo to Latakia.

Turkey’s Defense Ministry said the mission was carried out alongside Russia, but did not state that it was cut short. The ministry posted photos of the patrols, with Russian and Turkish soldiers discussing road maps.

Opposition and civil activists gathered along the M4 March 13, near Ariha, south of Idlib, to protest the cease-fire and Turkish-Russian patrols. The protesters blocked the road and burned tires to express their opposition to the patrols.

Nearly 200 people gathered near the Ariha Bridge on the M4. The protesters said they would continue to demonstrate until their demands were met: to halt the patrols and for the displaced to be able to return to their homes in the areas around Idlib, which is under regime control.

Salwa Abdul Rahman, a journalist from Idlib at the Syrian Press Center, told Al-Monitor, “The protesters do not represent any of the armed opposition parties. They consist of the displaced residents of Idlib.”

Abdul Rahman joined the sit-in March 14. “The demands are clear," she said. "They mostly urge the Turkish side to make sure to include in the agreement with Russia the return of the displaced to their areas in the vicinity of Idlib, from which the Assad regime forced them out.”

“Russia is involved in the crime. Based on that, it cannot be a guarantor [country]. This is why we refuse to see its patrols conducted,” she said.

Ammar Mohamed Nassar, a civil activist from al-Bab city in the Aleppo countryside, told Al-Monitor, “The protesters cutting the M4 highway before the patrols will have a negative impact on the opposition and Turkish ally.”

He added, “It is better for the sit-ins not to prevent the patrols from passing, but to deliver the messages to Russia and the Assad regime at the same time.”

The cease-fire agreement does not specify the eventual fate of large parts of the opposition-held areas south of the highway in the Jabal al-Zawiya region and northern Latakia countryside. The opposition fears that the above-mentioned area will be split between the regime forces and their allies.

Syrian activists and opposition accuse the al-Qaeda-affiliated Guardians of Religion Organization, HTS and the Syrian Salvation Government, which is close to HTS, of hindering the agreement and preventing patrols from being conducted. Activists say these forces are behind the M4 sit-ins with the intent of embarrassing Turkey and to foil its efforts to halt the regime offensive in Idlib.

Malek Tarboush, a journalist based in the Idlib countryside, told Al-Monitor, “The opposition is divided over the cease-fire agreement in Idlib. This is crystal clear in their declared and undeclared stances. The sit-ins that seek to prevent the joint Russian-Turkish patrol mission on the M4 highway reflect the differing positions toward the agreement and its articles.”

Col. Khaled Kutayni, who resides in Idlib and has defected from the regime forces, told Al-Monitor, “The Russian occupier will invest in obstructing the patrols’ passage and the sit-ins to place great pressure on the Turkish ally, [considering it] to be weak and unable to meet its obligations.”

Mustafa Segari, political director of the FSA-affiliated al-Mutasim Brigades, told Al-Monitor, “The opposition’s commitment to the Turkish understandings is a duty at this stage. Any attempt to undermine the Turkish diplomatic efforts will lead us to a new disaster.”

He continued, “Turkey is not resorting to bulldozers to open the roads to the Russian forces. Rather, it is cutting the road to the attempts to fully hand over the area and halt the regime forces’ offensives.”