US envoy presses Russia to halt Syrian offensive on Idlib

A top US envoy today pressed Russia to get the Syrian regime to halt a military offensive into the northwestern Syrian enclave of Idlib that has driven some half a million people to flee their homes since December. 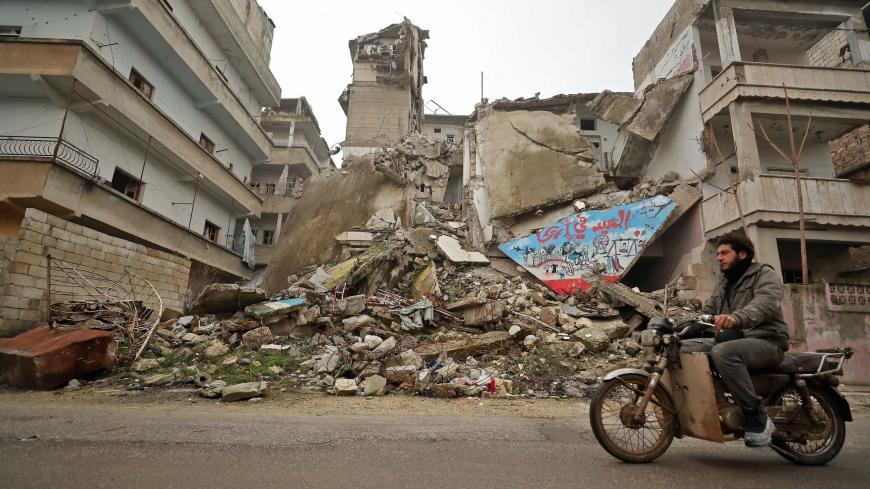 A Syrian man rides his motorcycle past a damaged building following an airstrike by pro-regime forces on the rebel-held town of Ariha in the northern countryside of Syria's Idlib province on Feb. 5, 2020. - OMAR HAJ KADOUR/AFP via Getty Images

A top US envoy today pressed Russia to get the Syrian regime to halt a military offensive into the northwestern Syrian enclave of Idlib that has driven some half a million people to flee their homes since December.

“We are very worried about this,” Jeffrey said. “We have seen not just the Russians, but the Iranians and Hezbollah actively supporting this offensive.”

The US administration is not sure if the Syrian regime offensive is intended just to go to the M4 road, or beyond, he added.

“The United States once again condemns the continued, unjustifiable, and ruthless assaults on the people of Idlib,” Secretary of State Mike Pompeo said in a statement Tuesday. “We stand by our NATO ally Turkey in the aftermath of the attack, which resulted in the death of multiple Turkish personnel serving at an observation post used for coordination and de-escalation, and fully support Turkey’s justified self-defense actions in response.”

The UN Security Council was expected to hold an emergency meeting on the situation in Idlib and Syria on Thursday.

“We will of course sit down and discuss everything,” Erdogan told journalists traveling with him to Ukraine on Tuesday, referring to Russia. “Not with anger, though. Because those who sit down with anger, get up with losses.”

The UN secretary-general appealed for a cease-fire.

“We are particularly worried that now the escalation came into a situation in which we had Turkish army and Syrian army bombing each other, and that, of course, is a change in the nature of the conflict that is extremely worrying,” UN Secretary-General Antonio Guterres told journalists at a press conference Tuesday.

Amid the escalating violence between Turkish and Russian-backed Syrian forces in Syria, the United States has also seen an increase in the number of instances of Russian troops entering deep into territory the United States still controls in northeastern Syria, Jeffrey said.

Both Russia and the United States are trying to exploit Russian-Turkish and Turkish-US tensions to advantage, said Bassam Barabandi, a former Syrian diplomat who supports the Syrian opposition now based out of Washington.

“The more Russia feels that Turkey is not part of its alliance with Iran … and it is leaning more to the Americans, the more Russia tries to make Turkey pay a heavy price for that,” Barabandi told Al-Monitor. “And the heavy price is more IDPS” — internally displaced people fleeing toward the Turkish border.

“That is why they allow the regime to pursue its offensive,” Barabandi said, adding that the Syrian IDPs are largely fleeing the areas before the Syrian regime takes them.