The US secretary of state calls for an Idlib cease-fire as the UN and aid groups warn the exodus marks the largest humanitarian crisis in the nine-year Syrian war. 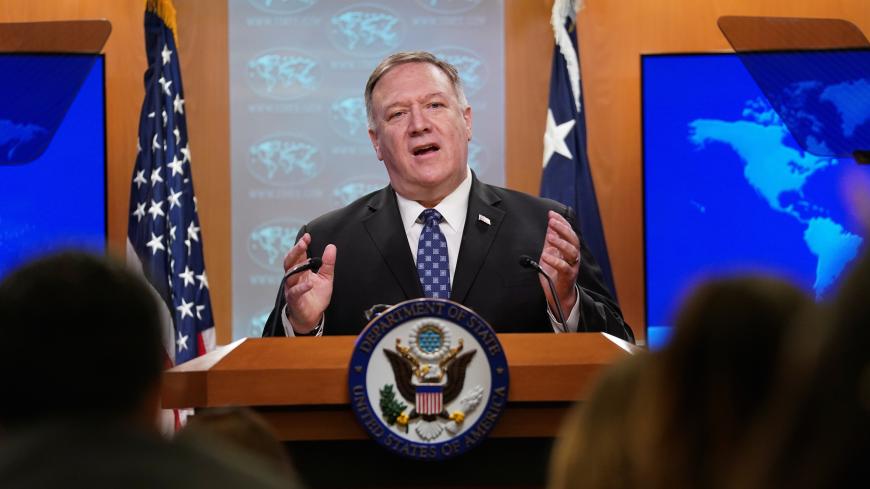 US Secretary of State Mike Pompeo speaks to reporters during a briefing at the State Department in Washington, Feb. 25, 2020. - REUTERS/Kevin Lamarque

WASHINGTON — Secretary of State Mike Pompeo today called for a permanent cease-fire in the northwestern Syrian province of Idlib, warning that a Russian-backed Syrian regime offensive that has driven a million civilians to flee toward the Turkish border could grow to imperil 3 million people. Aid groups also pleaded for a halt to the violence that has fueled the largest wave of displacement in the nine-year Syrian war as some former US diplomats and experts called for consideration of a Syria safe zone.

“The Assad regime’s brutal new aggression there, cynically backed by Moscow and Tehran, imperils now more than 3 million displaced persons, including, as we’ve tragically seen, young people,” Pompeo told journalists at the State Department today. “As we’ve said many times before, the regime will not be able to obtain military victory.”

“The answer is a permanent cease-fire and UN-led negotiations,” Pompeo said. “As President [Donald] Trump said on Tuesday [Feb. 18], we are working together with Turkey on seeing what we can do together.”

“This is the worst wave of displacement we’ve seen during the Syrian conflict,” Fabrizio Carboni, the International Committee of the Red Cross director for the Near and Middle East, said in a statement from the group today. “We urge the parties involved to allow civilians to move to safety, either within the areas they control or across the front lines.”

The State Department, in an emailed response to questions from Al-Monitor, reiterated Pompeo’s call for a cease-fire, and condemnation of the regime of Syrian President Bashar al-Assad and its Russian and Iranian backers, and expressed solidarity with the Turkish government. But the United States has not yet announced additional pledges of support to address the staggering humanitarian crisis. The UN humanitarian affairs office last week said it was increasing its appeal to $500 million from $336 million to try to provide assistance to over a million people from northwest Syria over the next six months.

“We initially sought to help 800,000 displaced people over the next six months; we are now planning to address the needs of 1.1 million people,” Jens Laerke, a spokesman for the UN Office for the Coordination of Humanitarian Affairs, told journalists in Geneva on Friday.

“We join the UN in calling for an immediate cease-fire and for indiscriminate violence against the people of northwest Syria by the Assad regime, Russian, and Iranian forces to stop,” a State Department spokesperson told Al-Monitor by email.

“The Syrian people are bearing the burden of Assad's push for victory and paying a terrible and deadly price,” the spokesman continued, noting that more than 80% of the almost million people who have fled to date are women and children. “Babies and small children are dying from the cold. More people are dying from attacks on settlements for the displaced.”

“While the Assad regime and Russia continue to indiscriminately attack and kill civilians, the US government is providing humanitarian assistance to those in need in northwest Syria,” the State Department spokesperson continued. “Despite ongoing safety and security challenges for humanitarian agencies in northwest Syria, State and USAID partners continue to provide emergency assistance to vulnerable populations. US government partners are distributing essential relief items, food, and winterization support to internally displaced persons (IDPs); supporting hospitals and mobile clinics serving conflict-affected populations; and providing shelter and water, sanitation, and hygiene (WASH) assistance to IDPs in camps and informal settlements across the region.”

“Turkey alone cannot handle the humanitarian fallout caused by Russia and the Assad regime's continued attacks on the people of northwest Syria,” the State Department spokesperson said. “We stand by our NATO ally Turkey against these actions. President Trump, in his call with Turkish President Erdogan on Saturday, reiterated our call for Russia to end its support for the Assad regime's atrocities and for a political resolution to the Syrian conflict.”

The massive exodus from Idlib province will not stop unless the people think their towns are secure from regime advance, said Syria researcher Elizabeth Tsurkov.

“When I speak to people in Idlib, the level of desperation, and general belief that they are about to die en masse is very troubling,” Tsurkov told a panel on Idlib hosted by the Middle East Institute on Friday.

The US is providing intelligence support to Turkey, and top US Syria envoy James Jeffrey has intensively consulted with the Turks and has reached out to try to reenergize channels with the Russians, Syria expert Charles Lister said. But US presidential leadership is likely required for the US to mobilize a diplomatic coalition to try to address the Idlib crisis, Lister said.

“You need the president to lead what would inevitably be primarily a diplomatic campaign — a diplomatic coalition of the willing — that significantly escalated the matter on the diplomatic stage,” Lister, with the Middle East Institute, told Al-Monitor. “It would not be a total game changer, but it may give the Turks the confidence they currently lack to do what they are capable of in terms of significant pushback. ... They feel they are alone.”

“If we were to generate a diplomatic coalition, the ask … would likely be for a safe zone which stretches 35 kilometers [22 miles] into Idlib, until the M4 highway,” he said. “That is where Turkey has created a string of observation posts.”

Al-Monitor's Feb. 21 Week in Review noted that — in light of the deadlock at the UN Security Council to address Idlib — progress could come through engagement with Moscow. "US President Donald Trump and Russian President Vladimir Putin probably need to talk and see if some common ground can be found."

Former US Ambassador to Syria Robert Ford also called in an article Monday for a Syria safe zone, but a smaller one (about 10 miles deep) than Lister thinks is required.

“The best option that eschews direct US military intervention is a safe zone located on the Syrian side of the Turkish border that is defended by Turkish artillery, missile, and antiaircraft systems located on the Turkish side of the border,” Ford wrote in Foreign Affairs. “If Syrian aircraft approach the safe zone, Turkey-based air defenses could hit them in Syrian airspace. This might be enough to deter the Syrian military .… If it is not, … Turkey could counter with artillery and rocket fire, coordinating with Syrian opposition fighters. The safe zone could be less than ten miles deep — only as far as the Turkish military could reliably cover from its side of the border.”

“I would be amazed if Washington does anything,” Ford said. While Jeffrey and the State Department have expressed solidary with Ankara, he said, “other parts of the US administration, particularly the Pentagon, are furious at the Turks.”

Ford was also pessimistic that US engagement could secure Russian backing for an Idlib de-escalation. “We have been trying to get sincere and meaningful Russian cooperation since the Syrian uprising started in 2011,” Ford, now with the Middle East Institute, said. “And the Russians have consistently on every occasion defended the Syrian government and declined to put hard-hitting pressure on Damascus.”

“The Russians decided, the longer the war goes on, the harder it is for the Syrian government to stabilize. … and they want the Europeans, and the Gulf states, to help rebuild Syria,” Ford said, an objective he said Moscow thinks will be advanced “the sooner people forget about Idlib.”