Turkey's tone has softened on its military confrontation with Syria with Defense Minister Hulusi Akar telling fellow NATO ministers in Brussels that Ankara sent 5,000 additional troops to the rebel-held province "to secure a lasting cease-fire." 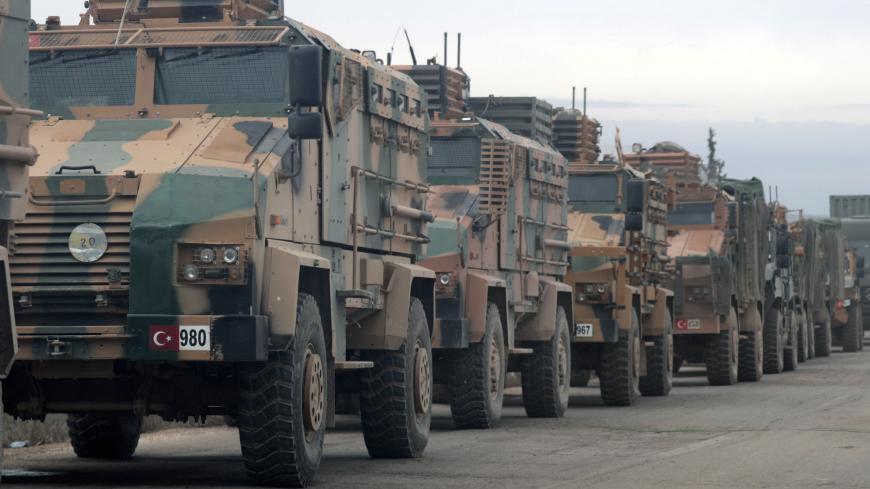 Turkey’s defense minister sounded a more dovish note on his country’s ongoing military confrontation with Syria over Idlib today, telling fellow NATO ministers in Brussels that Ankara’s aim in sending some 5,000 additional troops to the rebel-held province was “to secure a lasting cease-fire.” Hulusi Akar’s comments contrasted with days of hawkish rhetoric from Turkish President Recep Tayyip Erdogan, who as recently as yesterday threatened all-out war against the Syrian army unless it withdrew from recently captured terrain in Idlib where Turkish and Syrian forces have bloodily clashed over the past week, leaving 10 Turkish observation posts under siege. Erdogan set a March 1 deadline.

At least 14 Turkish soldiers and an unknown number of Syrian forces have died since the start of February, the first time the sides have come to blows since the start of Syria’s civil conflict in 2011. The effects of the escalation are being felt on Turkey’s wobbly currency, with the lira wilting further against the dollar for a third consecutive day.

In an apparent olive branch to Moscow, Akar warned that those who do not abide by the cease-fire, “radicals included,” will be “dealt with by force” and that “all measures” would be considered against them. Akar was referring to Hayat Tahrir al-Sham (HTS), the radical jihadi group that Syrian forces backed by Russian airpower are battling to expel from Idlib.

Turkey’s efforts to stymie the militants' advance, including on the critical M5 motorway connecting Aleppo and Damascus, are testing deepening ties with Moscow.

Elizabeth Tsurkov, a fellow at the Foreign Policy Research Institute who has written extensively on Idlib, agrees that Akar was likely placating Moscow. “If Turkey takes on HTS it will be solely to please Russia. Turkey’s doesn’t see HTS as a security threat,” she told Al-Monitor in an email. “HTS is not preventing Turkey from operating in the area and is willing to abide by cease-fires with the regime and even prevent more radical factions such as Hurras al-Deen, Ansar al-Tawhid and Ansar al-Islam from violating it.” Tsurkov continued, “Turkey was supposed to remove the [jihadis] inlcuding HTS and all heavy weapons from the borders of the demilitarized zone [monitored by Turkish troops under its deal with Russia] and it failed to do so. The regime and Russia kept shelling. So nobody abides by cease-fires.”

On Wednesday, however, Russia’s Ministry of Defense squarely blamed Ankara for the unravelling of the so called de-escalation — a first — asserting that it had not kept its pledges to separate HTS “terrorists” from “moderate opposition militants within the jihadis’ quasi-statelet on Turkey’s borders.

On the same day, national security adviser Robert O’Brien also took Turkey to task for “failing to help the situation,” pouring cold water on any illusions that Washington might ride to its rescue. When queried about the violence in Idlib that has sent hundreds of thousands of terrorized civilians fleeing toward the Turkish border, O'Brien retorted, “What are we supposed to do to stop that? We're supposed to parachute in as a global policeman and hold up a stop sign and say stop this, Turkey? Stop this, Russia? Stop this, Iran? Stop this, Syria?”

Ankara might be forgiven for harboring such hopes. On Feb. 11, Secretary of State Mike Pompeo tweeted he had sent Syria envoy Jim Jeffrey to Ankara “to coordinate steps to respond to this destabilizing attack” and pledged “to stand by our NATO ally Turkey.”

Well-informed sources told Al-Monitor on condition of anonymity a buoyant Jeffrey had encouraged his Turkish interlocutors to “go all in” on Idlib and that the United States and NATO would have its back. They declined to elaborate.

Jeffrey has been campaigning — unsuccessfully so far — to decouple Ankara from Moscow and sees Idlib as a big chance, the sources said. But Jeffrey was “alone” in signaling support for Turkey in Idlib, one of them said.

Yesterday, Pentagon press secretary Alyssa Farah debunked a Turkish media report that a deal had been struck during Jeffrey’s visit for the United States and NATO to take more concrete steps on Idlib. “No such agreement was made,” Farah said.

Selim Koru, an analyst at the Ankara-based think tank TEPAV, observed, “Many people are wired to look for the end of good relations between Turkey and Russia. I don’t think that will happen anytime soon, and I don’t think it’ll happen over Idlib. The relationship between Erdogan and Putin is robust.” The pair spoke over the telephone Wednesday and said they would work toward the “full implementation” of prior cease-fire deals to avert further escalation.

Koru believes Turkey’s overarching strategy is to maintain leverage over developments in Syria, “and the best way to do that is to hold onto territory.”

“Turkish institutions have spent a lot of resources and put a lot of effort into developing and organizing those territories,” he said of the chunks of northeastern Syria and Afrin Turkey grabbed from the Syrian Kurds and the Jarablus area it wrested from the Islamic State.

“The problem has always been that Turkey hasn’t worked out a political formula that would allow it to remain in these territories. Now we’ve reached the state of the war where that problem will have to be addressed."

Turkey will either have to “hurt the regime badly enough for it to withdraw,” which is unlikely given that Russia refuses to open the airspace over Idlib to Turkish war planes or drones. Or, Koru reckons, it will seek to bring in its Western allies by raising the specter of further waves of Syrian refugees heading for Europe. “I’m not sure that will help, either,” Koru concluded.

Meanwhile, pro-Iranian militias have joined the fray on the side of the regime, making matters even stickier. The pause in hostilities Turkey is agitating for can only be secured through Russia’s assent. Past experience suggests it may well be forthcoming now that Ankara has been bruised. But “is Turkey truly planning to live happily ever after with the jihadistan on its borders?” asked Hediye Levent today in her column for the leftist Evrensel daily. She believes the most sensible course of action would be for Turkey to make peace with Damascus.

And how would the long-suffering people of Idlib react? “As long as they won’t be bombed and the regime can’t come in, they’ll be ecstatic,” Tsurkov said. “They’ve lost much of their faith in Turkey and its willingness or ability to protect them. But once it becomes stable, they’ll be very happy and grateful and probably still complain that they didn’t do it earlier.”