Reports came in of massive losses among Turkish troops as President Recep Tayyip Erdogan continued his hawkish posturing toward the Syrian regime. 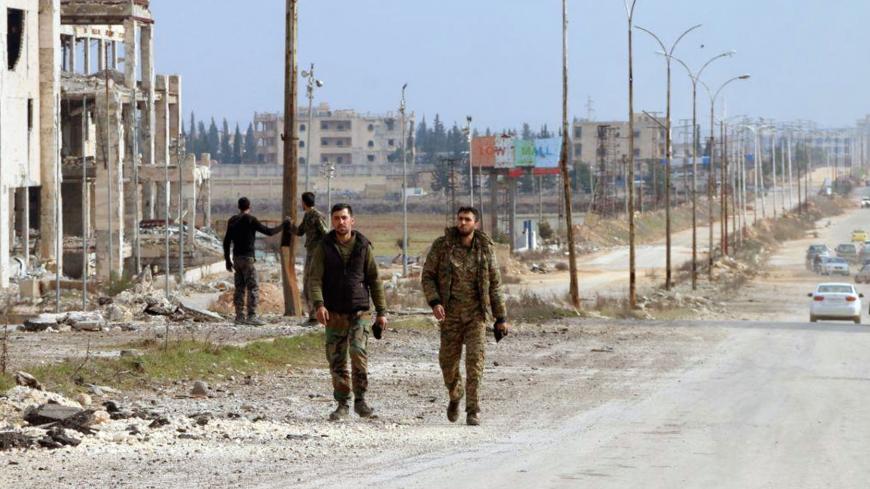 Syrian army soldiers walk along a street in Aleppo province, Syria, in this handout released by SANA on Feb. 17, 2020. - SANA/REUTERS

At least 33 Turkish soldiers were  killed in the Syrian province of Idlib today in an escalating confrontation between Russian-backed Syrian forces on one side and Turkish forces and their Sunni rebel allies on the other, marking the highest number of Turkish losses in a single day since the start of the civil conflict in Syria nine years ago.

The governor of the border province of Hatay who revealed the figures blamed the deaths on an air attack by the Syrian regime.

Speaking after an emergency national security meeting convened by Turkish President Recep Tayyip Erdogan, presidential communications director Fahrettin Altun pledged that Turkey's soldiers would be avenged. "Our operations in the Syrian theater will continue until the blood soaked hands taking aim at our flag are broken. The decision to retaliate with far greater force against the illegitimate [Syrian] regime that pointed its guns at our soldiers has been made."

An unnamed Turkish official told the Reuters news agency that Turkey had decided to no longer stop Syrian refugees from reaching Europe by land or by sea. The move is widely seen as an attempt to pressure Western intervention in the conflict. Meanwhile, Turkish presidential spokesman Ibrahim Kalin spoke to US national security advisor Robert O'Brien over the telephone and Turkish Foreign Minister Mevlut Cavusoglu made a seperate call to NATO Secretary Jens Stoltenberg.

Details of where the strike occurred remain murky, though initial reports suggested that it was in a small village on the outskirts of Saraqeb. A Turkish supply convoy was reportedly struck as well.

Crowds of people gathered around a hospital in Reyhanli in the Hatay province where the wounded were said to have been transported.

Aaron Stein, director of the Middle East program at the Foreign Policy Research Institute in Philadelphia, said, “Ankara is in a bind. They have to do something, but doing something means tangling with a more powerful adversary, Russia.” Aaron told Al-Monitor, “They must be thinking they can try and calibrate a response to try and keep Russia out of it. They also must be thinking this may not be possible, so we are going to need help from our allies.” There are few signs though that either the United States or Turkey’s other NATO allies will intervene in a conflict they view as being largely of Turkey’s own making.

Stein continued, “Russia can tailor an escalation in a number of ways. It can make life miserable for Turkish forces in Syria, either by bombing supply lines or by extending the fight into areas Ankara occupies and administers along the border.”

Erdogan showed no signs of backing down from a full-blown war with Russian-backed Syrian forces earlier today, claiming the situation in Syria’s northwest province of Idlib “has turned in our favor.” Addressing members of his Justice and Development Party, prior to the nocturnal carnage, Erdogan vowed to press on, saying, “We have three martyrs, may they rest in peace. But the regime forces’ losses are far greater.”

Erdogan’s comments followed news that Turkey’s Syrian rebel allies had recaptured the strategic town of Saraqeb, severing the regime’s control of the M5 highway linking Damascus to Aleppo. It would mark their first gain since government forces began their latest offensive to regain full control over the province dominated by former al-Qaeda affiliate Hayat Tahrir al-Sham.

“The city of Saraqeb has been liberated completely from [Bashar al-]Assad’s gangs," said Naji Mustafa, spokesman for a coalition of rebel factions called the National Liberation Front. Photos posted by pro-rebel accounts showed triumphant Turkish-backed fighters inside the town. They included Ali Jaber Pasha, the leader of the powerful jihadi militia Ahrar al-Sham, who was filmed walking near Saraqeb’s main roundabout.

But an unnamed Russian official quoted by the Russian press denied that Saraqeb had fallen, saying government forces had repelled the attack. An unidentified Turkish official subsequently told Reuters that Syrian government forces backed by Russian airpower had launched a counter attack, leaving Erdogan’s claims of a reversal somewhat shaky. The fate of the town that was taken by the Syrian army three weeks ago, triggering Turkey’s massive response — as many as 15,000 Turkish forces are believed to have been deployed to Idlib — remained unclear as of time of publication.

Today's losses bring the number of Turkish soldiers killed in Idlib to 52 since the start of February. Several reportedly died in Russian airstrikes, though Turkey is loath to admit so, and the death toll will likely rise unless Ankara and Moscow strike a deal.

Russia controls the skies over Idlib, giving the Syrian army a big strategic advantage over the Turkish air force.

“The fundamental problem is that when a diffuse insurgent group clumps together, it makes them easier to kill,” noted Stein. Russian state television claimed Turkish military advisers were using shoulder-fired missiles to try to shoot down Russian and Syrian military aircraft above Idlib. “Russia will switch now to higher altitude bombing. [Saraqeb] may be in rebel hands but I’d guess that will invite more punishment. And that punishment will prevent the return of IDPs, the main issue Ankara has with the offensive,” Stein said. “This is pyrrhic, if you ask me.”

The conventional wisdom thus far is that Erdogan is playing a game of brinksmanship with Russia.

His main concern is that further regime advances would lead to over 900,000 civilians, half of them children, pushed up against the Turkish border to cross into Turkey. Erdogan’s popularity has taken a hit as resentment against nearly four million Syrian refugees already inside Turkey grows.

“Our surveys consistently show that nearly 80% of respondents say they want Syrian refugees to go home,” said a Turkish pollster who declined to be identified because of confidentiality clauses with his clients. “It’s become existential for Erdogan.”

Erdogan may well believe that Putin would be unwilling to forsake friendship with Turkey over Syria. It's allowed Russia to drive a wedge in NATO through the sale of S-400 missiles to Ankara, among other things. He may also believe that a growing humanitarian crisis, the gravest since the start of the conflict nine years ago, may shame the United States into intervening in some way. US officials, most recently Secretary of Defense Mark Esper in his remarks yesterday, consistently rule the possibility out.

The Donald Trump administration faces significant barriers in responding to the situation in Idlib, US officials say. Speaking at a closed-door event in Washington on Thursday, Richard Outzen, a senior State Department advisor on Syria, said that the US lacks the legal authority to ground Assad’s air force or to shoot down Syrian warplanes, attendees told Al-Monitor.

Meanwhile, the US administration is considering sending a high-level delegation to Turkey next week to look at the situation on the border that could include US Ambassador to the United Nations Kelly Craft and State Department envoy for Syria engagement Jim Jeffrey, two sources said. On Thursday at the off-the-record event at the Turkish Heritage Organization, a pro-government think tank, Outzen called for the international community to support Turkey and said the US would provide resources for humanitarian assistance, the attendees said.

“Since becoming president, Erdogan has surrounded himself with people who don’t dare to tell him, ‘You are making a mistake.’ Now he’s left with a circle of bootlickers who are mostly so ignorant they can’t even tell that he is making mistakes,” said an Ankara-based source with close knowledge of Erdogan’s inner circle.

And so Erdogan keeps testing the limits of Russia’s patience, apparently undeterred by Turkish soldiers now being killed by Russian planes. But Putin shows no signs of budging and the Kremlin denied today that the Russian president would meet Erdogan March 5 for face to face talks after a putative summit of Russian, Turkish, German and French leaders in Istanbul was scrapped.

Meanwhile, efforts at shuttle diplomacy have failed so far. A Russian delegation headed by Vladimir Putin’s special envoy for Syria Sergey Vershinin has been in talks in Ankara since yesterday but there was no breakthrough yet again. Turkey’s Defense Minister Hulusi Akar said the sides were working on allowing access for Turkish drones, presumably to protect more than a dozen observation posts manned by Turkish forces under the terms of a 2018 cease-fire agreement struck between Erdogan and Putin in the Black Sea resort of Sochi. But today's events will have buried any such hopes which were unrealistic to start with.

Erdogan has set a Feb. 29 deadline for Syrian troops to pull back to the Sochi-delineated positions. With three days left and neither side backing down, it’s becoming unnervingly unclear how far they are willing to go. After today’s Turkish losses, Erdogan will be forced to respond or lose credibility. Either way, it’s increasingly looking like a lose lose for Ankara.