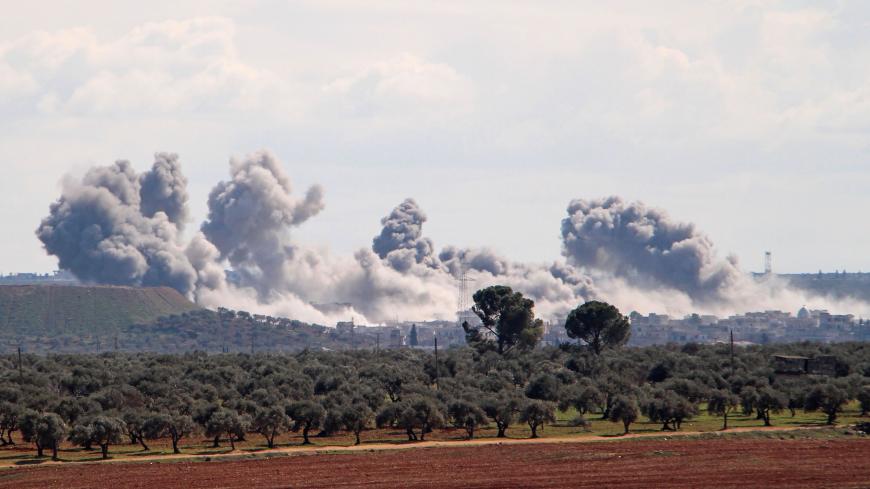 Turkey said it had destroyed several air defense systems, more than 100 tanks and killed 2,212 members of the Syrian forces, including three top generals in drone strikes since Feb 27.

At least one Turkish drone was shot down by Syrian forces today; Syria claimed that it shot down three. In the downing of the Syrian jets, the pilots were reported to have parachuted to safety.

Earlier today, Syria said its northwestern airspace was closed and that any aircraft or drone that violated it would be treated as hostile and shot down.

As war raged on in Idlib, a humanitarian drama was unfolding at Turkey’s border with Greece.

On Thursday, Turkey announced that its borders were open for millions of Syrian and other refugees in Turkey to leave. It justified the move on the grounds that it could no longer cope with the burden, with up to a million civilians fleeing regime violence in Idlib remaining massed along Syria's border with Turkey. Thousands of migrants have gathered near Greece's Kastanies border crossing, some getting there by taking free rides on buses organized by the Turkish government. Turkey’s state-owned Arabic-language broadcasting channel, TRT Arabi, provided maps for migrants showing various routes to reach the border.

The Turkish interior minister said that 76,358 people had left Turkey through the western city of Edirne in Thrace. The UN’s International Organization for Migration said 13,000 people had gathered at Pazarkule and Ipsala crossings on the Turkish side.

Greece has vowed to stanch the flow, firing tear gas at migrants who tried to force their way across the border at Kastanies, where some migrants pelted border guards with rocks.

The European Union called an emergency meeting of foreign ministers today while Erdogan lashed out at the EU for failing to fulfill a 2016 deal under which Turkey undertook to care for nearly 4 million mostly Syrian refugees in exchange for 6 billion euros ($6.6 billion) in financial support.

Erdogan has repeatedly threatened to flood the EU with refugees. “Right now it's difficult to predict what the official EU reaction will be,” said Marc Pierini, a former EU ambassador to Ankara and a Brussels-based senior nonresident fellow at Carnegie Europe.

Pierini told Al-Monitor, “From what I hear around here, the effect of this new blackmail is a complete disaster. One because the Turkish leadership is officially misleading migrants, telling them that ‘borders are open.’ Two because this is now an additional state-organized humanitarian disaster. There is total bewilderment in Europe at what the Turkish leadership can do when finding itself in a total, self-inflicted dead end.”

Aykan Erdemir, senior director of the Turkey program at the Foundation for Defense of Democracies, agreed. “The term that best characterizes Turkey’s current foreign and security policy is kakistrocracy, that is, government by the least qualified,” he told Al-Monitor. “The only silver lining in the Idlib crisis is that now [the Turkish government] can blame Turkey’s looming economic crisis on exogenous factors, allowing Erdogan to deny that his son-in-law Berat Albayrak, who is in charge of the economy, is to blame for his incompetence and mismanagement.”

There were few signs that the Turkish government and its cheerleaders in the tightly controlled media saw things that way. “We view outside criticism of our refugee policy with a sense of incredulity,” tweeted Erdogan’s communications director, Fahrettin Altun. “Those who fight over what to do with a few thousand refugees dare criticize a country with 3.7 million refugees for saying ‘Enough's enough.’ The rampant hypocrisy is disingenuous and shameful.”

Altun continued, “Our goal has been to prevent ethnic cleansing and war crimes by the Assad regime as well as displacement and more refugees. We have been left alone in this struggle.”

As Turkish forces and their Sunni rebel allies continued to inflict heavy losses on regime forces today, the tone in Turkey shifted from mourning to jubilance — and jingoism. “As a Turk, I am proud that it is my government and my army that bring about this level of destruction on Assad’s militias from the air. First time in nine years,” tweeted Hilal Kaplan, a fiercely pro-Erdogan columnist for the daily Sabah newspaper.

“Aleppo is ours and so is Hatay,” declared Ibrahim Karagul, a fellow Erdoganist scribe on his Twitter feed. He was responding to an article by Russia’s state-run Sputnik news agency, which opened to debate Turkey’s 1939 acquisition of Hatay — also known as Alexandretta — in a disputed referendum following the breakup of the Ottoman Empire by the allied powers. The article is believed to have spurred today’s detention of the editor-in-chief of the Turkish version of Sputnik. Mahir Boztepe was released following a phone call between Turkish Foreign Minister Mevlut Cavusoglu and his Russian counterpart Sergey Lavrov.

The emerging question is why Russia was allowing Turkey to pummel Moscow's ally. And why did Putin agree to meet with Erdogan on March 5 in Moscow after the Russian president initially said he had other plans?

After all, the consensus among military experts is that Feb. 27 airstrikes were likely carried out by Russian jets. “Russia flies at night, the regime can’t. The Turks were bombed at night,” said Aaron Stein, director of the Foreign Policy Research Institute’s Middle East Program. Both sides have chosen to blame the regime for the attack, presumably to avert a direct confrontation that neither side wants.

Still, Russia's mild reaction has surprised commentators. And so has Erdogan’s confidence: He said of his most recent telephone conversation with the Russian leader, "I asked Mr Putin, 'What's your business there?' If you establish a base, do so but get out of our way and leave us face to face with the regime."

Did Putin underestimate Erdogan when the pugnacious Turkish leader set a Feb. 29 deadline for Syrian forces to move out of Idlib? Is he merely letting Erdogan save face? Or does Ankara have more agency in its relations with Moscow than it is credited for? It’s probably a bit of everything, said Kevork Oskanian, an honorary research fellow at Birmingham University who is writing a book titled “Russian Empire.” He told Al-Monitor, "Russia’s reluctance to intervene in the regime’s favor does appear to be designed to allow Erdogan to save face while also softening Assad up for compromise.” Oskanian continued, “At this stage, I am wondering whether a grand bargain could yet emerge, taking into account Turkish interests in Syria — particularly regarding the Kurds — and the Russian urge to see military closure, perhaps through a ‘managed’ takeover of Idlib, as the final piece of the puzzle. The preliminary result could yet be a fudge — preventing escalation but not really providing finality.”

Others reckon that while Putin may well have miscalculated just how far Erdogan is willing to go, ultimately it is Russia rather than Turkey that will prevail on the terms of any de-escalation.

“Erdogan is playing backgammon on Putin’s chessboard,” said a senior Western diplomat speaking on condition of anonymity in order to speak freely. “He is cornered and increasingly reckless.”