European-Turkish contacts are intensifying in an effort to stave off a disastrous refugee crisis on Turkey's border with Greece that could have repercussions across Europe. 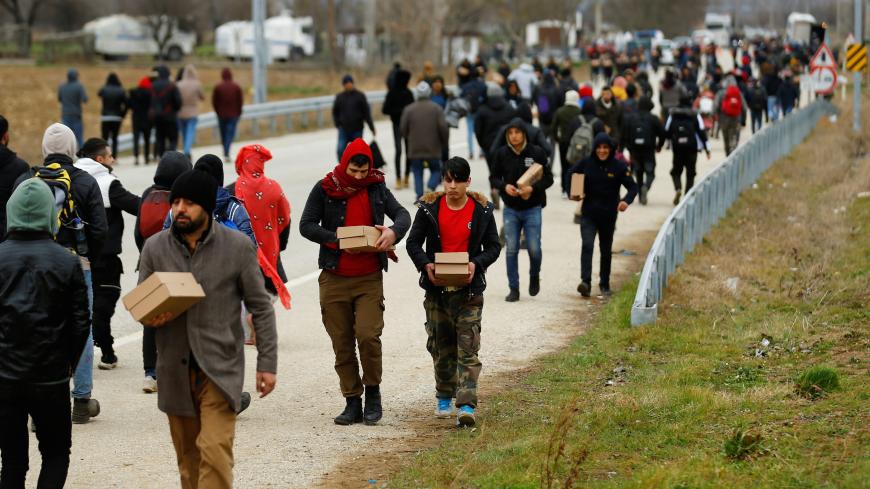 EU foreign policy chief Josep Borrell was due to arrive in Ankara today, part of a diplomatic effort to defuse a crisis brewing on the Turkish-Greek border that could result in a repeat of the mass influx of migrants in 2015 that triggered a sharp populist backlash across Europe.

A senior Western official who briefed Al-Monitor on the EU’s deliberations said, “There’s an intense effort by the EU Commission and the EU Presidential Council to see what can be done and put something together by the end of the week that would basically stabilize the Turkish-European relationship without resolving the struggles in Syria that actually I don’t see how Europe could do.”

Early signs bode ill for a breakthrough. Turkey’s President Recep Tayyip Erdogan said he had spurned an EU offer of one billion euros in extra aid for migrants in Turkey. “We don’t want this money,” he said today. “No one has the right to mock Turkey’s dignity.”

Erdogan warned that “millions” of migrants would soon head to Europe because the EU had failed to honor a 2016 agreement whereby the bloc pledged six billion euros to support the nearly four million refugees currently living in Turkey. Erdogan said Turkey has spent 40 billion dollars on the refugees so far.

Turkey began lifting controls on migrants exiting for the EU after a deadly Feb. 27 airstrike on Turkish forces in Syria’s Idlib that killed at least 34 Turkish soldiers. The Turkish Defense Ministry announced that its military had downed a Syrian L-49 warplane over the province, where Turkey is battling on the side of Sunni rebel forces seeking to repel a recent Russian-backed offensive. It’s the third Syrian warplane to have been downed by Turkey since launching its Operation Peace Shield on Feb. 28.

At least a million civilians fleeing regime attacks that have targeted schools and hospitals in Idlib remain massed on Turkey’s border, where they are surviving in miserable conditions. Turkey says it cannot take them. UN officials describe their plight as the gravest humanitarian catastrophe to have struck Syria since the start of the civil conflict in 2011.

At the same time, around 13,000 migrants, mainly Afghans, have flocked to Turkey’s Pazarkule border crossing with Greece, where Greek border guards have violently prevented them from getting through.

Turkey’s Interior Minister Suleyman Soylu announced on Twitter today that the number of migrants who had reached Greece via Turkey’s border province of Edirne had reached 130,469. The figures are believed to be inflated and the Greek authorities have labeled them dangerous misinformation.

“What’s the idea behind that?” the official briefing Al-Monitor asked. “Just to tell that story to a Turkish audience or to increase the push factor toward migrants to make their way to the border, or a combination of both? It’s still not clear.”

Either way, the official noted, “Erdogan has very powerful leverage if he decides to use it even more ruthlessly than he’s done so far. Numbers do matter.”

Should the number of migrants on the border swell to the levels claimed by Soylu, it may well prove impossible to staunch their flow. “It’s a big concern that the Bulgarians have,” the official said.

Erdogan’s rebuttal of the EU’s financial offer followed a meeting in Ankara on Monday with Bulgarian Prime Minister Boyko Borissov, who likely relayed the EU offer. Borissov told reporters after the talks that he had urged Erdogan to take part in a trilateral summit Friday in Sofia with Greek Prime Minister Kyriakos Mitsotakis, but that Erdogan had refused.

Erdogan's rejection, Borissov said, was based on reports that Greece had shot two migrants dead at the border yesterday. Greece dismissed the report as "fake news.”

The more likely reason is that Erdogan may be pushing for more money from the EU.

“He is probably desperate for money. Money is the easiest thing that the EU can offer. It’s much easier than getting involved in Syria militarily,” said the Western official, who spoke on condition of anonymity in order to speak freely.

It remains unclear how much more the EU is willing to part with and what it will take for Erdogan to back down.

The official acknowledged, “It's quite clear that not every element of the March 2016 agreement has been implemented. It had an element of sending immigrants back from the Greek isles to Turkey. It only happened in a small number of cases.” The official continued, “There was an element of direct resettlement from Turkey to the EU, which has also been lagging. As you know, there’s also been the whole question of visa-free travel in return for reforms of Turkish anti-terror laws [used to quash dissent], and that has been stuck right from the beginning.”

One of the biggest snags, the official added, is Ankara’s demands that the money be disbursed directly to Turkey. “There is a pretty clear refutation from the EU Commission's side that says this money needs to be programmed for specific projects and a lot of it has been disbursed, if not all of it. But there’s never been a question of paying the money directly into the Turkish budget, as Erdogan suggests you should.”

Meanwhile, the EU has been internally debating what kind of support should follow once the six billion euro tranche expires. “That has been controversial over the past two months and we’ll see what the current dynamic will do to that discussion within the EU,” the Western diplomat said.

“There is a recognition that if you think there is little that you do to help change the situation for the better within Syria, then helping Turkey to cope with the consequences is the right thing to do after all. But blackmailing is not the best way of calling for help.”

Turkey’s economy is looking ever more fragile despite revived growth propelled by controversial stimulus measures, and it is sapping Erdogan’s popularity. The lira plunged to its lowest level in more than a year following the Feb. 27 carnage.

The airstrikes are widely believed to have been carried out by Russia, though Ankara and Moscow publicly blame Assad in a face-saving fudge.

Erdogan is scheduled to meet with Russian President Vladimir Putin in Moscow March 5 to push for an immediate cease-fire in Idlib.

The Western official said, “He realizes how bad his negotiating position vis-à-vis the Russian president really is. Now he is turning back to Europe and does it in his own peculiar way by threatening to use migrants and refugees as an instrument of pressure.”

Turkey has also turned to its NATO ally, the United States, which has until now rebuffed its demands for military support, including for Patriot missile batteries to be deployed on the Syrian border. But Jim Jeffrey, the administration’s envoy for Syria engagement, told reporters during a tour of Turkey’s Syrian border today that the United States would provide ammunition for Turkish forces. “Turkey is a NATO ally. Much of the military uses American equipment. We will make sure that equipment is ready and usable,” Jeffrey told reporters without providing further details.

Craft, the US ambassador to the UN who traveled with Jeffrey to the border to “show American solidarity with the people of Syria,” announced $108 million in additional humanitarian assistance.

Jeffrey, a former US ambassador to Ankara, has been waging a concerted campaign to pull Turkey away from Russia. He has pushed for a no-fly zone over Idlib, as first reported by Al-Monitor’s Jack Detsch.

Yet, even as Jeffrey landed in Turkey yesterday, Secretary of Defense Mike Esper ruled out any retaliatory strikes against Russia in support of Turkey. Turkey has plenty of ammunition, defense experts say.