Opinion polls show mixed feelings about Turkey’s declaration of a major offensive in Syria after an attack killed dozens of its soldiers. Public attention has also shifted hundreds of miles away to its borders with Europe after the government invited millions of refugees to leave. 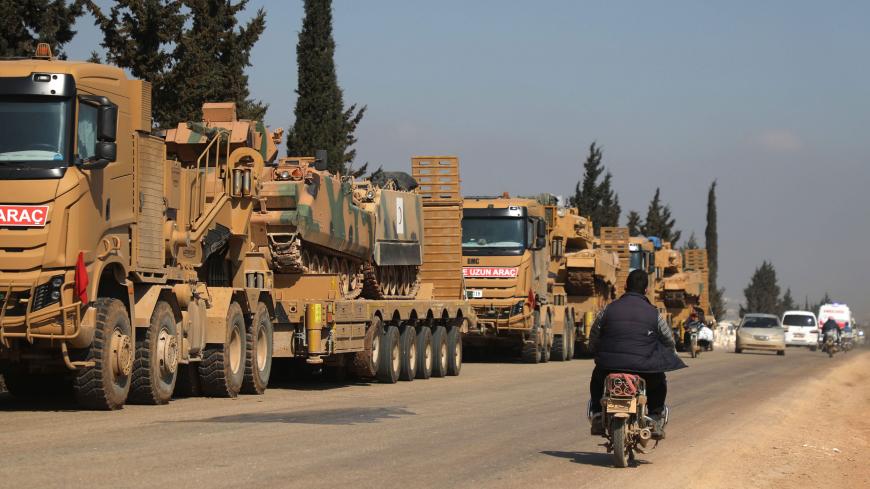 A convoy of Turkish military vehicles is pictured near the town of Hazano, in the rebel-held northern countryside of Idlib province, Syria, March 3, 2020. - AAREF WATAD/AFP via Getty Images

ISTANBUL — Turkey’s fourth military operation in Syria in as many years has divided the country along the same political fault lines that have polarized it in recent years, with the government’s supporters seeing an urgent threat emerging south of the border and its critics fearing Turkey is sliding deeper into the Syrian quagmire.

Fighting in Syria’s northwest province of Idlib, the last stretch of territory held by Turkish-backed opponents of Syrian President Bashar al-Assad, has intensified dramatically as Turkey downs Syrian jets and bombs air defense systems in Operation Spring Shield, launched at the weekend. At least 34 Turkish soldiers were killed Feb. 27 in Idlib in an airstrike blamed on Syria.

Turkey wants to halt the Syrian army’s advance, which has already forced almost 1 million people to flee to its closed border. The military campaign is accompanied by another effort to placate public anger over the large number of refugees already in Turkey. The government late last week ordered border guards manning its western frontiers to stand down and invited millions of migrants to leave for Greece.

The deaths of the soldiers shocked Turkey, marking the most fatalities its army suffered in a single attack since the early 1990s. Taxis formed a huge procession in central Istanbul early on Tuesday, waved flags and blasted their horns to honor the soldiers. Spontaneous marches took place in several cities. Members of Turkey’s tiny Jewish community prayed for the dead on Shabbat in Hebrew and Turkish.

“This is the time for unity,” said Oner Yildirim, a security guard in Istanbul. “Idlib is right on our border, and if we don’t take control, the danger will spread to Turkey. Our state’s policy is aimed at keeping us safe. I’m very sad for our martyrs, but we are all ready to give our lives for the sake of our flag.”

Deeply nationalistic, most Turks unconditionally support their military, which regularly tops lists of their trusted institutions. But the latest foray into Syria opens a new chapter for an army whose cross-border activities have been limited to pursuing insurgents. Three earlier operations in Syria, greenlit by both Russia and the United States, to fight the Islamic State and a Kurdish militia with links to the outlawed Kurdistan Workers Party (PKK) had overwhelming public support.

Now, Turkish soldiers are openly battling another government’s army for the first time since the 1974 Cyprus invasion, and it’s on behalf of mostly Islamist militants, bringing NATO’s second-biggest army and Russia, Assad’s main backer, to the brink of confrontation. Close to 60 Turkish soldiers have died in Syria since January.

A poll from A&G Research showed 65% of Turks want the operation to continue and 63% believe the armed forces are in Idlib to thwart an “existential” threat emanating from Syria. Seven out of 10 blamed the soldiers’ deaths on Russia, the survey of 2,225 people conducted between Feb. 29 and March 1 showed.

A week before the soldiers were killed, another polling organization found most opposed a new operation. Ozer Sencar of MetroPoll told Al-Monitor that half of the respondents said no and 31% said yes when asked if Turkish troops should be in Idlib.

Turkish President Recep Tayyip Erdogan has cast the conflict with Syria as a battle for the soul of his nation. “Those asking the question ‘What business does Turkey have in Syria?’ are actually recommending we surrender to terrorist groups and to an enemy regime,” he said. Nine years of war in Syria has forced 3.7 million Syrians into Turkey. Should Idlib fall, millions more will come, he warned.

But Turks seem more worried about a sharp economic slowdown. The economy and unemployment are the most important problems Turkey faces, a combined 57% of people surveyed in February by Area Research said. Terrorism ranked first at 11% and Syrian refugees at 9%. The poll showed 50% of voters said they would not vote for Erdogan if an election were held now.

“With the PKK, the government can point to its past actions to demonstrate the threat it poses. But there are important questions about what the political goals now are in Syria and how they will contribute to Turkey’s security,” said Burak Bilgehan Ozpek, a professor of international relations at TOBB University in Ankara. “If the death toll rises, public support will diminish and resentment will rise, leaving the government in a difficult political position that could evolve into necessitating early elections.”

Ire over the killing of the soldiers has been directed at various targets, even Syrian refugees. A mob attacked Syrian businesses and homes in the southern town of Elbistan, and a small group of youths punched Syrians in the Black Sea town of Samsun, newspapers said. In Istanbul, protesters shouted “Murderer Russia, murderer Putin” outside of the Russian Consulate.

Others marched on the Ankara homes of Turkish employees of Russian news outlet Sputnik. Police then briefly detained the three journalists, as well as Sputnik Turkiye’s chief editor, before Russian Foreign Minister Sergey Lavrov spoke with his Turkish counterpart Mevlut Cavusoglu and demanded their release. Criticism by Turks of the operation has also been muffled after prosecutors opened criminal investigations into social media users.

Erdogan has taken care not to vilify President Vladimir Putin, with whom he has cultivated close commercial and diplomatic ties, and on Monday said Turkey has no beef with Russia or Iran, Assad’s other sponsor. Instead, he has continued to blast traditional allies for failing to stop Assad’s onslaught and warned Europe will soon contend with “millions” of refugees.

The United States is an especially easy target after years of divergence on Syria policy, including US support for the PKK-affiliated militia in Syria. Just one in five Turks has a favorable view of the United States, according to the Pew Research Center’s Global Attitudes Survey. MetroPoll found in January that Russia is the country Turks trust most, Sencar said, though he noted only a plurality of 25% of respondents ranked it first.

The United States and others appear eager to capitalize on a potential falling-out with Russia after long fretting Turkey was moving into Moscow’s orbit, especially with the purchase of a Russian missile system designed to shoot down NATO jets. Western officials, including US special envoy for Syria James Jeffrey, British Foreign Minister Dominic Raab and EU foreign policy chief Josep Borrell are all rushing to Ankara this week to show support.

Erdogan heads to Moscow to meet Putin on March 5, where they could agree to reduce hostilities in Idlib, said Soner Cagaptay, director of the Turkish Research Program at the Washington Institute for Near East Policy. “Turkey isn’t breaking up with Russia. This feels a bit like a staged fight, [where] Putin has allowed Erdogan a window to destroy Assad targets until their summit and then [an exit] before this becomes a protracted engagement when we can expect Turkish public support to split,” Cagaptay told Al-Monitor.

The humanitarian crisis at Europe’s gates serves Russian goals by fanning anti-migrant sentiment and weakening EU solidarity. The bloc’s response, ranging from reports of Greek authorities’ using force to turn back refugees to Brussels offering Turkey cash, also reveals the fundamental flaws in the 6 billion euro deal it signed with Turkey in 2016 to stop migration.

Erdogan’s promise to dispatch Syrians to a “safe zone” galvanized public backing for an October incursion into northeast Syria, and though that zone has not materialized, Turks associate military action with resolving the refugee problem, said political scientist Sezin Oney. “Simultaneously opening the borders and launching a military operation is a political tactic. The public is discussing the refugees and not the loss of life in Syria after the initial outrage.”

Erdogan had been Syrian refugees’ most ardent defender, helping to contain a public backlash. But the discontent helped cost his party key offices in last year’s nationwide mayoral elections, and since then he has clamped down on refugees’ movements.

“The refugee policy has been a mistake from the outset. Refugees should have been kept along the border; instead, they have spread out across all of Turkey,” said Yildirim, a long-time Erdogan supporter. “Let Europe worry about them now," he added.