Turkey’s president is lamenting the bombardment of Syria’s last opposition bastion as the latest cease-fire is tested and trapped civilians may be forced to flee across the border. 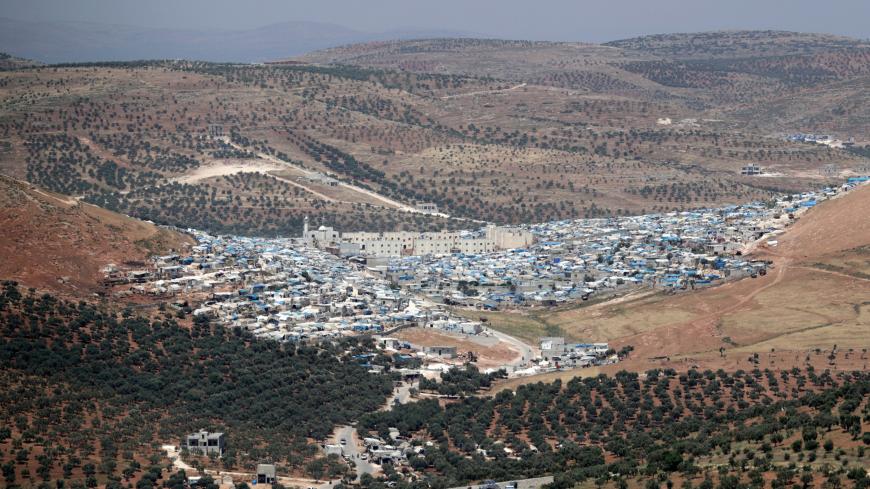 A general view of Atmeh camp for the displaced is seen in Atmeh, Idlib province, Syria, May 19, 2019. - REUTERS/Khalil Ashawi

ISTANBUL — Turkish President Recep Tayyip Erdogan warned the last rebel stronghold of Idlib in northwest Syria was on the verge of destruction as a barrage of airstrikes have killed hundreds of civilians since April and another tentative cease-fire is tested by lethal clashes.

Erdogan is the most outspoken supporter of the remnants of an opposition battling President Bashar al-Assad’s forces in the eight-year war, yet has also worked closely with Assad’s main backers, Russia and Iran, in a series of efforts to forestall an all-out attack on Idlib, a province adjoining Turkey where some three million people live.

But numerous cease-fires for Idlib have all collapsed and the Syrian army, backed by Russian airpower, has made deep advances into the region. The Syrian Observatory for Human Rights said on Wednesday at least eight soldiers and opposition fighters were killed on Tuesday, just three days after Russia put into force the latest truce. Russian reconnaissance flights resumed in the skies above on Wednesday, the UK-based monitor also said.

“Idlib is slowly being annihilated. Just as Aleppo was annihilated and leveled, now Idlib is in the same situation. It is not possible for us to remain silent in the face of all of this,” Erdogan said late on Tuesday at a press conference in Ankara. He said the airstrikes have killed 700 civilians in Idlib.

The United Nations puts the number higher. Michelle Bachelet, the UN High Commissioner for Human Rights, said on Wednesday the office has documented 1,031 civilian deaths in the last four months in Idlib and Hama provinces, almost all of them killed by Syrian government forces and their allies. Among them are hundreds of children, Bachelet told reporters in Geneva.

Erdogan said he will discuss the violence in Idlib when he hosts his Russian and Iranian counterparts in Ankara on Sept. 16. “Idlib is our matter, and the migration here will pressure our borders. … We are the ones aggrieved. The fire there burns us,” he said.

Turkey fears the violence in Idlib will push hundreds of thousands of people trapped there to its borders, creating a new refugee crisis at a time when public opinion has turned hostile toward the 3.6 million Syrians already sheltering in Turkey.

The government is cracking down on unregistered migrants, forcing them back to camps along the border if they do not have papers. It denies reports that it has forcibly deported hundreds or thousands back to Idlib, where they face possible violence or recrimination. But officials at the Bab al-Hawa border gate were quoted as saying Turkey had expelled 8,901 Syrians in August.

Turkey’s perceived failure to stop the attacks in Idlib prompted protests at the border late last week. Many Syrians were reportedly outraged by Erdogan’s visit to Moscow, where he was photographed eating ice cream cones and joking with President Vladimir Putin as bombs rained down on Idlib.

Erdogan has made a show of his close cooperation with Moscow as he spars with Washington, including the purchase of a multi-billion-dollar Russian antiaircraft system that NATO warns will jeopardize its security infrastructure. Turkey faces US sanctions and has already been kicked out of the US-led F-35 fighter jet program for buying the advanced S-400 system.

The Turkish Defense Ministry announced via Twitter that Turkish military personnel began their training for the S-400 missiles in Russia on Wednesday, and reports emerged that the advanced weapons system was now deployed and in operational mode in Turkey.

Erdogan told members of his party on Wednesday that the second delivery of S-400 components would soon be underway, “adding a wholly different power to our defense systems” as the country forges an independent path.

The rancor with the United States originates in large part in another corner of Syria where US-backed Syrian forces who pushed back the Islamic State could pose a threat to Turkey, he claims, because of their links to another Kurdish group that has waged an insurgency within Turkey since 1984.

Turkey and the United States agreed last month to jointly create a so-called safe zone in northeast Syria from which the Syrian Kurdish militia is expected to withdraw. Erdogan was quoted as saying last week that Turkey had conceded the zone would be shallower than the 20 miles (32 kilometers) Turkey wants, but that his military remained ready “to do anything at any time” to act unilaterally against Kurdish fighters if the agreement with the United States flounders.

“With a combination of bluffs, threats, and bluster, Erdogan managed to convince the United States to come up with an arrangement in northeastern Syria to prevent a Turkish invasion — an arrangement that comes at the expense of the Kurds,” wrote Henri Barkey, a professor of international relations at Lehigh University, in Foreign Policy.

“While Erdogan has shown his willingness to damage or jettison Turkey’s most important relationship for Putin, the fact remains that the two leaders are completely at odds over Syria,” he said.

During the press conference, Erdogan reiterated his construction plans for the buffer zone, including building homes with gardens, to allow refugees to return to Syria, but he also expressed frustration that the United States and Europe have failed to support his vision. “The safe zone remains in name only,” he lamented.

Yet Syrian Kurds believe the buffer zone has gotten off to a good start, and Kurdish forces have withdrawn from a small area along the Turkish border, the Associated Press reported, quoting a senior Syrian Kurdish official.

Meanwhile, Turkey continues to battle Kurdish militants at home. A Turkish soldier was killed and two others wounded on Wednesday when a roadside bomb detonated in Mardin province as they passed by, reported the state-run Anadolu news agency. Separately, the Interior Ministry said security forces had “neutralized” 117 fighters inside Turkey in August.