Failure to reign in Idlib jihadists makes trouble for Turkey

A year after the Sochi agreement, the situation in Syria’s northwest remains as tense as ever. 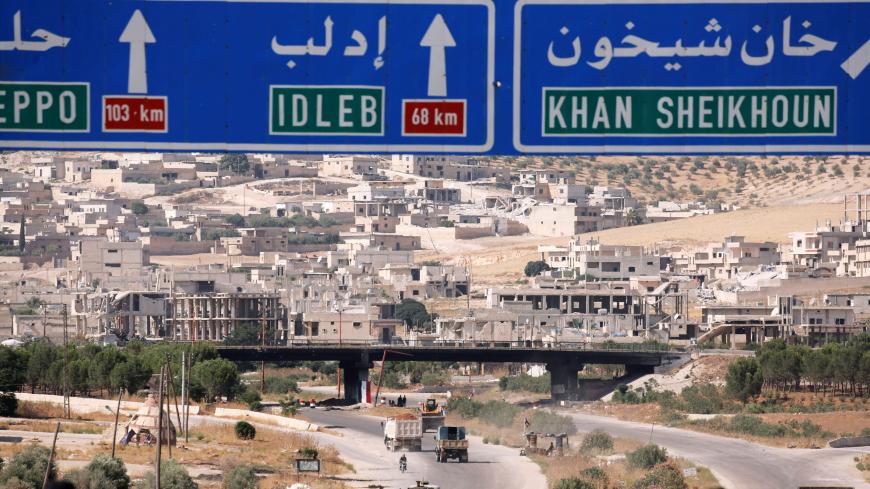 A year ago, Turkish President Recep Tayyip Erdogan and Russian President Vladimir Putin concluded the Sochi agreement aimed at de-escalating the situation in Syria’s troubled Idlib province. Now, the situation in the region continues to escalate, with Ankara facing the prospect of seeing its worst nightmares come true.

With civilians displaced from other parts of the country, Idlib is crammed with nearly four million people today. Many have started to head toward the Turkish border again to escape Russian-backed Syrian regime's attacks.

A new influx of Syrians would be a disaster for Ankara while it is already struggling to cope with over 3.5 million refugees in the country.

Meanwhile, Aug. 30's rioting at the Bab al-Hawa border crossing by Syrians trying to force their way into Turkey offered a vision of things to come. Turkish security forces used tear gas and fired into the air to disperse the demonstrators, who burned Turkish flags and posters of Erdogan.

When the Sochi agreement was concluded, many predicted that Ankara and Moscow would end up acting at cross purposes due to their differing priorities in Idlib. The agreement was hastily put together on Erdogan’s initiative after the Russian-backed Syrian army prepared for a massive push into Idlib in the summer of 2018. Ankara feared the advance would produce a new wave of refugees and eliminate Turkish-supported groups in the region.

A cease-fire was to be declared in Idlib under the agreement, and a demilitarized zone was to be established between “legitimate” Syrian opposition groups and the Syrian army. Turkish forces were to be deployed in the zone (Turkey has 12 military observation posts in Idlib today), together with Russian military police units, ) to monitor the cease-fire and ensure that the Sochi agreement's conditions were being met.

Turkey was also tasked with neutralizing Hayat Tahrir al-Sham (HTS) and other jihadist groups that Russia had said from the start would be excluded from the cease-fire.

“We agreed that by Oct. 15 [we will] create along the contact line between the armed opposition and government troops a demilitarized zone of a depth of 15-20 kilometers [9-12 miles], with the withdrawal from there of radically-minded rebels, including [HTS],” Putin said during his press conference with Erdogan in Sochi on Sept. 17.

Erdogan said, “With this agreement we have precluded experiencing a large humanitarian crisis in Idlib.” He added, “The opposition will continue to remain in the areas where they are,” and said that in return, Turkey would ensure that radical groups would not be allowed to operate in Idlib.

Looking back, this agreement has been honored more in the breach than in the observance.

Turkey’s inability — or unwillingness — to fulfill its obligation to neutralize HTS has turned into the main cause of its troubles in Idlib. Russia continues to complain that HTS gained control over most of the province under Turkey’s watch.

Many cease-fires have come and gone since the Sochi agreement, and more face-to-face talks have taken place between Erdogan and Putin since then, although they have failed to resolve essential differences over Idlib. The latest meeting took place on Aug. 27, when Erdogan hurried to Moscow to discuss the escalating situation in Idlib once again.

Putin, however, reiterated Russia’s priority in Idlib during the press conference after his talks with Erdogan, saying, “The terrorists continue shelling Syrian government troop positions and trying to attack Russian military facilities. We are convinced that the de-escalation zone should not serve as a shelter for militants or be a bridgehead for new attacks.”

He indicated that he had worked out “additional joint measures” with Erdogan “for neutralizing terrorist hotbeds in Idlib and normalizing the situation both in this zone and in the rest of Syria.” What these measures are and whether they can change anything remains unclear.

Erdogan said attacks by the regime in Idlib were not only targeting civilians but also threatening Turkey’s security and causing a major humanitarian crisis. Once again, though, he avoided blaming Russia. Ankara continues to call on Moscow to merely rein in the regime, though Moscow doesn’t deny its participation in the operations in Idlib. Erdogan warned that Turkey may have to prevent these attacks militarily if they threaten Turkish forces in the region. Whether Turkey can do so without Russia’s approval remains another open question.

Former Turkish Foreign Minister Yasar Yakis sees another reason the regime wants to continue its operations in Idlib. The regime may be acting “with the intention of embarrassing Turkey by amassing refugees at the border,” Yakis wrote in Arab News.

Analysts believe that President Bashar al-Assad is unlikely to halt operations in Idlib, given the momentum his bid to capture the whole of the province has gained with Russian support.

Erdogan’s weak hand against Russia in Syria was apparent during his visit to Moscow. After their Syria talks, Putin whisked Erdogan off to the MAKS 2019 air show, where he was enchanted with visions of the advanced military hardware Turkey could buy from Russia now that it has bought Russian-made S-400 air defense systems.

Despite the urgency of the situation in Idlib, it was this aspect of Erdogan’s visit that was highlighted by the pro-government Turkish press.

Moscow also used a sweetener prior to Erdogan’s visit, announcing that a unilateral cease-fire would be declared Aug. 31 in Idlib. Most analysts believe, however, that the course of this cease-fire will follow those declared previously.

According to Foreign Minister Mevlut Cavusoglu, the Russian side also gave assurances that Turkish military observation posts in Idlib would not be attacked by the regime. The reassurance comes after the regime's recent air strike on a Turkish convoy heading for the Turkish military post near the recently captured strategic town of Khan Sheikhoun.

Damascus claims that Turkey was taking military supplies to terrorists in Khan Sheikhoun. Many analysts believe the Syrian strike could not have happened without Russia’s knowledge.

Cavusoglu is also stressing that Turkey will not remove its forces from any of its 12 observation posts in Idlib.

Foreign policy analyst Murat Yetkin argued that Ankara is loath to evacuate these posts even if Turkish soldiers are targeted. “If it were to pull back its soldiers this will be seen by the Turkish public as a sign that Turkey’s Syria policy has collapsed completely,” Yetkin wrote in his Yetkin Report blog.

Russian Foreign Minister Sergey Lavrov claimed after the regime captured Khan Sheikhoun that it was honoring the Sochi agreement and only responding militarily to groups excluded from the accord. “Syrian armed forces, with our support, do not violate any agreement," Lavrov said during a press conference in Moscow on Aug. 26. "No one, at any time, agreed that attacks by terrorists would not be responded to,” he added.

“At times [Russia’s] operations intensify, then they slow down. Sometimes it declares a cease-fire but ultimately Syrian forces are narrowing the circle,” Bila wrote in the independent news portal T24.

Yetkin argued that Assad would gain control of Idlib despite efforts by Ankara to keep the regime away from the province. “It looks like Assad will go to Idlib but it is not clear where ‘opponents of the regime’ will go then,” Yetkin wrote, using a euphemism for jihadists. “What is worrying Erdogan is that the place they will go to will be Turkey,” he added.

Meanwhile, the recent unexpected strike by the United States against an al-Qaeda-linked jihadist camp in Idlib has added another complicating dimension to Ankara’s troubles in northern Syria, while Turkey’s problems with the United States east of the Euphrates River are far from resolved.

How Turkey will extricate itself from this web is a mystery for Turks who are following developments along Turkey’s long border with Syria with growing trepidation.