Will developments in Idlib force Ankara to turn to the West again?

Analysts say Turkey and Russia were always on a collision course in Syria due to their radically differing positions. 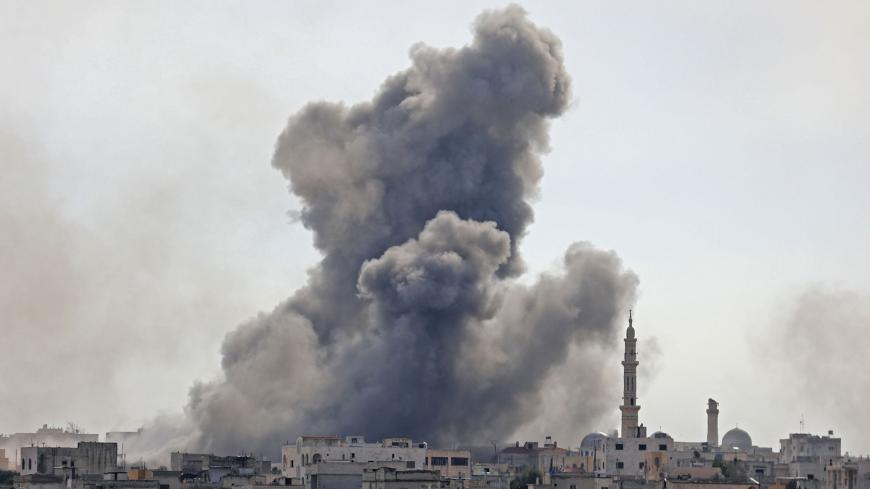 The killing of six Turkish soldiers and a civilian contractor attached to the Turkish military by Syrian regime forces in Syria’s northwestern province of Idlib on Feb. 3 has raised Turkey’s adventure in Syria to a different and much more dangerous level for Ankara.

Many Turkish analysts, especially those who argue that Ankara’s Syria policy was misguided from the start, believe that Turkey and Syria are effectively in a state of undeclared war today, and that Russia is a party to this conflict on the side of Damascus.

Angry statements by President Recep Tayyip Erdogan regarding developments in Idlib — during which he has also started to target Russia — have also been fueling this perception.

Meanwhile government spokesman Omer Celik declared openly, soon after news of this latest incident broke, that forces attached to the Syrian regime in Idlib will henceforth be legitimate targets for Turkey.

These developments point to a scenario that many Turks have been worried about for some time; namely that Turkey will be dragged into a long and drawn-out conflict in Syria.

Questions are also being raised as to how Turkey will extract itself from this increasingly grave situation. Ankara’s Syria policy has little, if any, support from the West or from key Arab states, while its “partnership” with Russia is breaking down.

There are growing expectations that Ankara will be forced to seek support from the United States and Europe to break out of this debilitating isolation. Statements out of Washington regarding developments in Idlib are in tune with Ankara’s position and reinforce this expectation.

"The destabilizing actions of Russia, the Iranian regime, Hezbollah and the Assad regime are directly preventing the establishment of a nationwide cease-fire in Syria … and the safe return of hundreds of thousands of displaced persons in northern Syria to their homes," US Secretary of State Mike Pompeo said Jan. 27.

“We stand by our NATO ally Turkey against these actions, send condolences to the Turkish government on the deaths of their people and fully support Turkey’s justified self-defense actions in response," Pompeo added Feb. 3, after eight Turkish military personnel were killed by the Syrian regime's shelling.

This strike also reveals the true limits of the partnership of convenience Turkey and Russia have established in Syria, which to date has worked largely to Moscow’s advantage.

Ilter Turan, who teaches international relations at Istanbul Bilgi University, told Al-Monitor, “It was evident from the start that Turkey and Russia have incompatible positions in Syria.”

The Russian statement regarding the strike against Turkish forces showed that Moscow stood behind Damascus. It said Ankara did not inform Moscow it had forces in the region where operations were being conducted by the regime against jihadi elements.

In contradiction of Turkish official statements, the Russian statement said Turkish fighter jets had not violated Syria’s borders and that no Turkish airstrikes on the positions of Syrian troops had been recorded.

Some analysts took this as a subtle message to Ankara from Moscow warning that Russia controls Syrian airspace and is in a position to follow and record every “violation” by Turkey.

Turan said latest developments in Idlib show what many have believed for some time, that Ankara and Moscow “have been on an unavoidable collision course” in Syria.

He said he believes this could “provide an opportunity for Turkey to improve its ties with the West.”

The need for Western support in Syria has also started to be underlined by pro-government commentators and analysts. Burhanettin Duran, from the government funded SETA foundation in Ankara, is one such analyst. “Washington and Brussels must place pressure on Moscow. … Ankara cannot shoulder the burden of counterbalancing Russia on its own,” Duran wrote in the pro-government daily Sabah.

Duran, who also acts as an adviser to Erdogan, said he believes Western powers should come to Ankara’s assistance for their own interests if for nothing else, arguing that a fresh wave of refugees from Idlib would threaten European democracies.

UN sources said hundreds of thousands of refugees fleeing Idlib have started piling up on the Turkish border. Erdogan has threatened on multiple occasions in the past to open Turkey’s doors for the refugees to go to Europe if the West doesn’t assist Turkey in this crisis.

Duran’s remarks also reflect the growing resentment toward Russia in Turkish government circles, although this is being kept mostly in check for the sake of the broader relationship between the two countries.

Until recently, the same circles were lauding the increasing political and military relationship with Moscow and the “counterbalance” this would provide to Turkey’s deteriorating ties with the West.

Reaching out to the West at a difficult time for Ankara, such as the present moment, begs some questions. For example, what would the price tag for seeking US support in Idlib be?

Ankara and Washington are at odds over the presence of the Kurdish People's Protection Units (YPG) group in lands east of the Euphrates River, and the problem remains today even if this matter has moved to the back burner due to developments in Idlib. Turan said Washington is unlikely to make any concessions to Turkey regarding the YPG.

Nevertheless, he said some concessions by Turkey to Washington could lay the ground for better cooperation in Idlib. He indicated that minor concessions with regard to the S-400 air defense systems Turkey purchased from Russia — a move that has angered Washington — may help in this regard.

The dust will have to settle after the strike on Turkish forces for a better picture to emerge as to how Ankara plans to proceed. For now, though, Erdogan is vowing retaliation over the latest incident, saying this has already started and will continue.

The attack on Turkish forces has opened a new chapter in Turkish-Russian ties with regard to Syria. Many on the Turkish side are convinced that the Syrian army could not have targeted Turkish positions without Russia’s prior knowledge and support.

“Turkey recently decided to send more military elements to the region. It was these elements that Syria targeted,” wrote Sami Kohen, one of Turkey’s most senior foreign policy commentators.

“Ankara has no doubts that this was done intentionally and that Russia supported this,” Kohen added in his column in daily Milliyet.

Many expect the way ahead in Turkish-Russian ties to be marked by increasing tensions that the sides will have to manage carefully in order to avoid any serious breakdown in their burgeoning political and economic relationship.

Meanwhile, it appears that efforts spearheaded by Moscow aimed at trying to bring Ankara and Damascus closer will be undermined by this latest development.

Despite much foot-dragging on the Turkish side, the Russian effort appeared to be making some headway, as demonstrated by the meeting in January in Moscow between the intelligence chiefs of the two countries.

Erdogan and his government will be hard-pressed domestically to continue with these contacts at a time when the Syrian side is seen to be killing Turkish soldiers.

However, Turan said he believes this latest incident could end up acting as a catalyst for normalization of ties between Ankara and Damascus.

Turan, like many Turks opposed to Erdogan’s Syrian policy, said he believes Ankara has to recognize President Bashar al-Assad’s regime in order shore up its negotiating position in Syria.

“This may appear more difficult now after this latest development but difficult situations can hold the key to new and favorable developments. Turkey has to do this in order to regain some of the ground it has lost in the Syria negotiations,” Turan said.

Whichever route it decides to take in the end, it is clear that Ankara’s choices in Syria remain limited, and that its reliance on Russia is proving to be disappointing, as many suspected it would be all along.