Palestinians are preparing to resume the march of return along the Gaza border with Israel under a new name and expanded to include resistance to the US peace plan. 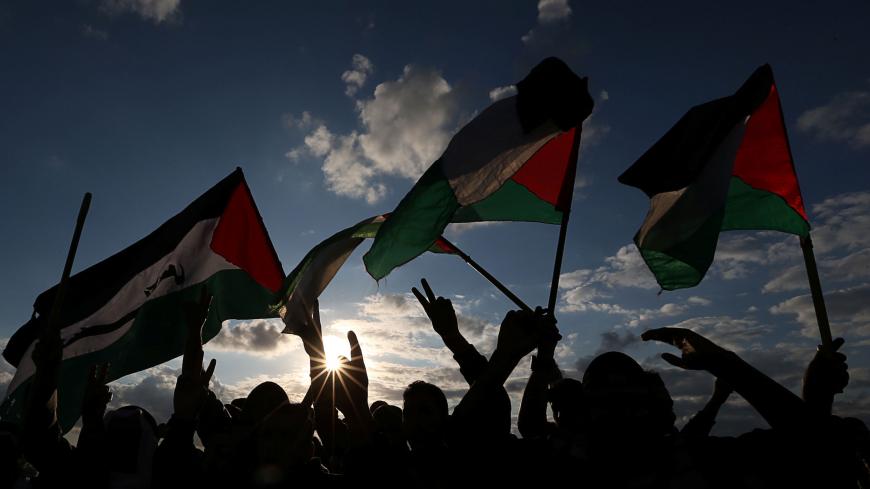 GAZA CITY, Gaza Strip — Palestinians in the Gaza Strip are preparing to hold regular demonstrations on the border between Israel and the Gaza Strip to protest US President Donald Trump’s Mideast plan.

In a Feb. 19 conference organized by the Islamic Jihad in Gaza City, senior Hamas official in Gaza Khalil al-Haya announced that the Palestinian march of return on the borders with Israel with resume March 30 in rejection of the peace plan.

The Higher National Commission for the Great Marches of Return, which includes representatives of all Palestinian factions but Fatah, suspended the marches for three months in December.

Since March 2018, Palestinians had been protesting weekly at five points along the border against the Israeli siege on the Gaza Strip. The Israeli military fired at the protesters on several occasions, killing 317 Palestinians and injuring 19,400 others since the beginning of the protests up until December.

Commission member Talal Abu Zarifa told Al-Monitor, “The marches will resume March 30, on Land Day,” a national occasion in which Palestintans celebrate their attachment to their land.

Talal Abu Zarifa added that the marches will pick up again. This time, he explained, there will be regular protests each month and on national holidays and include peaceful protests as well as cultural events.

He noted, “The marches will send a message to the world that Palestinians reject the 'deal of the century' and will never give up their land.”

Abu Zarifa went on, “Israeli Prime Minister Benjamin Netanyahu did not abide by the truce. He is using it to achieve political goals to embellish his image before Israeli society. We do not accept this.”

Political analyst and writer for Palestinian al-Ayyam newspaper Talal Okal told Al-Monitor that the marches were suspended last year to give Israel a chance to fulfill its commitments under the truce, such as establishing industrial zones on the Gaza border and expanding the list of material and products allowed to enter Gaza.

Okal added, “Israel did not implement any of the articles in the past three months while the protests on the borders were suspended. It only offered concessions — on Feb. 18, it expanded the fishing zone to 15 nautical miles and offered traders in the Gaza Strip 2,000 new permits to enter Israel.”

He argued that the concessions are not enough for Hamas, which seeks radical measures to revive the economy in the Gaza Strip and allow the entry of dual-use materials such as heavy equipment.

Political analyst and journalist for the Hamas-affiliated Felesteen newspaper in Gaza Iyad al-Qarra told Al-Monitor that the change is designed to avoid losses of life among the protesters to Israeli fire.

Qarra noted, “Organizing these protests weekly has become burdensome for the participants and organizers. Therefore, it was agreed to organize the marches monthly instead.”

He added, “The protests were not a failure at all. They achieved important goals, such as improving the travel conditions of Palestinians through the Rafah crossing and pushing Israel to facilitate fishing in the Gaza sea and allow the entry of more merchandise to the Gaza Strip.”

Qarra said, “The protests along the border areas will continue as part of the marches of return and will maintain their peaceful aspect.” Hamas still sees incendiary balloons as an option. “This option will remain available each time Israel reneges on its commitments in the Gaza Strip.”

Abu Zarifa said that changing the name of the commission “indicates that the marches now prioritize facing the deal, which outweighs the importance of economic or living conditions.”

As a result of the name change, three Palestinian factions announced their withdrawal from the commission Feb. 20. They include the Palestinian National Initiative, the Popular Front for the Liberation of Palestine-General Command and Al-Saiqa forces. The factions stated that the name change “did not happen based on national partnership and consensus. Our suggestions that included strategies to unite efforts and improve performance based on experience were not taken into consideration.”

Abu Zarifa said, “Opinions regarding the strategies of the marches differ, and we are now holding talks with all Palestinian factions to agree on a work formula that suits everyone and fights Trump’s conspiracy against our people.”

Qarra believes the three factions “were pressured by Fatah … which is not part of the marches of return, wants to break up any Palestinian commission led by Hamas and does not want Hamas to make any national achievements in facing the deal.”