Palestinians resumed the marches of return on the Israel-Gaza border after they were halted for weeks. 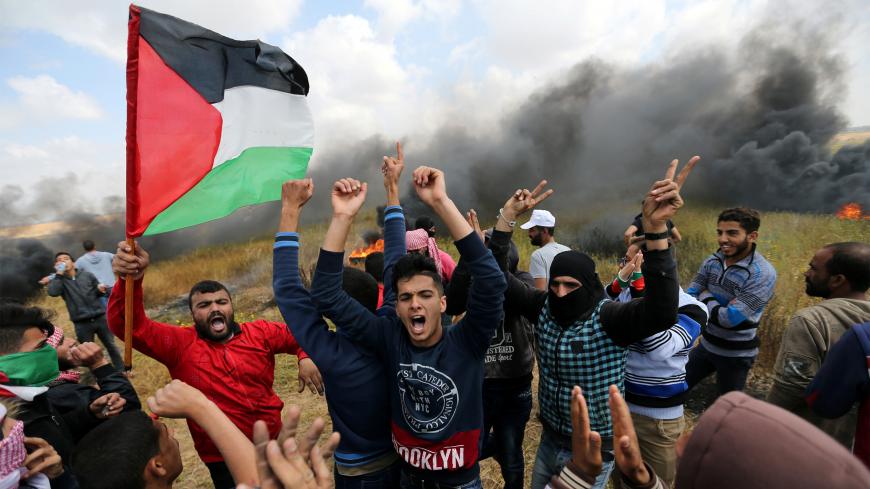 Palestinians shout during clashes with Israeli troops during a tent city protest along the Israel border with Gaza, demanding the right to return to their homeland, Gaza, March 30, 2018.

GAZA CITY, Gaza Strip — The Higher National Commission for the Great March of Return and Breaking the Siege announced Dec. 26 the end of the weekly marches of return, saying they will now be held once a month or during national holidays. The commission added that the marches will be halted for a three-month period to prepare for the holding of the first march of the new year, to be held March 30, 2020, on the occasion of Palestinian Land Day.

The commission stated that the decision to make the marches into a monthly rather than weekly event came after weeks of discussion and analysis of how to best serve the interests of the people.

The news comes after Palestinians in the Gaza Strip resumed the weekly marches to return and break the siege Dec. 6, after having stopped for more than three weeks. The Higher National Commission for the Great March of Return and Breaking the Siege claimed the marches were halted to prevent the Israeli army’s killing and wounding of protesters.

The weekly marches since the start of December put the cease-fire reached between Israel and the Palestinian Islamic Jihad (PIJ) Nov. 14 to the test. The PIJ put three conditions on Israel to agree on the cease-fire, namely halting attacks on peaceful protesters in the weekly marches, stopping political assassinations and committing to the truce understandings reached in October 2018.

Yedioth Ahronoth newspaper estimated Dec. 6 the number at more than 4,000 protesters. On Dec. 20, protesters were 2,700. On Nov. 8, a week before the protests were halted, 5,500 protesters took part in the marches.

Palestinians have been protesting every week since March 2018 in five locations along the borders between Israel and the Gaza Strip. Protesters often clash with the Israeli army, which shoots live fire and rubber bullets at them. As a result, 317 Palestinian protesters were killed and 19,400 others injured as of the first week of December 2019.

The Palestinian Ministry of Health announced Dec. 6 that 37 Palestinians, including 10 children, suffered different wounds when the Israeli army cracked down on protesters that day. The number is low compared to the week preceding the halting of protests, Nov. 8, when 104 protesters were injured, which can be explained with Israel’s fear of the reaction of Palestinian factions in case more people died.

Israel sent out a message Dec. 5 to Hamas through mediators, holding it responsible for any losses in lives among protesters during the marches that were due Dec. 6. Meanwhile, the Israeli army deployed additional soldiers along the borders with the Gaza Strip.

Member of the Higher National Commission for the Great March of Return and Breaking the Siege Talal Abu Zarifeh told Al-Monitor the decreasing number of injured during the past week came after Palestinian factions informed mediators they would respond to any Israeli assault on peaceful protesters.

Abu Zarifeh added the marches will now be held once a month and during national holidays only, not weekly like in the past, and more cultural activities will be held for the youth and school students to introduce them to the march of return and its goals.

Hamas spokesperson Abdul Latif al-Kanouh told Al-Monitor the marches would not stop before fulfilling their initial goals, including breaking the siege on the Gaza Strip and talking Israel into approving the reconstruction of the Gaza airport and seaport to facilitate the movement of Palestinians and their trade with the world.

Kanouh said the strategic goals include cementing Palestinians’ right of return to their lands from which they were displaced, foiling the US peace plan known as the deal of the century or any other projects that want to eliminate the Palestinian cause.

He noted the marches have already achieved some goals, like opening the crossings with Israel and Egypt after they were being closed intermittently, pushing for improved electricity supply to Gazans, securing Qatari financial grants for the poor and building a US field hospital in the north of the Gaza Strip to solve the health crisis there.

Palestinians accuse Israel of being slack in implementing the truce understandings, and they have repeatedly threatened public escalation through the weekly marches or military escalation if Israel reneges on its commitments to the understandings.

Protester Youssef Radwan, 23, from Gaza City, told Al-Monitor, “I have not missed any of the weekly marches near the eastern borders of the Gaza Strip even. I believe these marches are the peaceful means currently available to pressure Israel to end its blockade of the Gaza Strip."

Another protester, Muhammad Al-Najjar, 31, from the town of Abasan, east of Khan Yunis, told Al-Monitor, “I was wounded three times by the Israeli army while participating in the marches. In March, I was hit by a live bullet. However, I insist on taking part in these marches."

He added, "My injury caused me 30% disability of my lower limbs. This has scared many of my friends who would accompany me at the weekly marches to refrain from showing up for fear of being shot."

The resumption of marches came after Israel's claims that Egypt is deploying intensive efforts with Palestinian factions visiting Cairo to reach a long-term truce with the Gaza Strip. In return, the factions would halt any military action against Israel, and Hamas would engage in indirect negotiations with Israel to settle the case of Israeli detainees in the Gaza Strip.

Political analyst and former editor-in-chief of the local Felestin newspaper Mustafa al-Sawaf told Al-Monitor marches resumed because Palestinians became convinced they were the most useful and least costly pressure card on Israel to lift the siege off of the Gaza Strip.

He indicated the achievements Palestinians have managed to snatch from Israel are acceptable at this first stage, and he expected mediators to pressure Israel to better commit to implementing the truce understandings.

Political analyst close to the PIJ Hassan Abdo told Al-Monitor the PIJ would not allow the Israeli army to violate the cease-fire, which Egypt brokered Nov. 14. He said the PIJ would have responded fiercely in case of deaths or injuries among civilians during the Dec. 6 marches.

Abdo noted that lifting the siege — which has been closing in on the Gaza Strip for 13 years and creating tough financial, economic, social and humanitarian conditions — is the only way to reverse this equation.

The organizers of the return marches are waiting for the beginning of the new year to asses the size of the participation in these marches. The number of protesters has dropped, and many fear being injured or killed during these marches.