Protests bring to life a new generation in Iraq

Iraqis under the age of 18 have been participating in protests at higher rates than before. 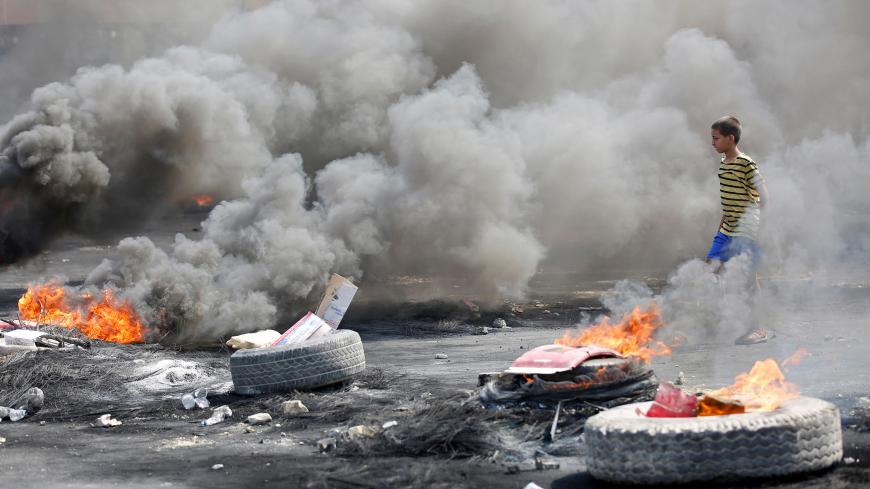 A boy is seen near burning tires during a curfew, two days after the nationwide anti-government protests turned violent, in Baghdad, Iraq, Oct. 3, 2019. - REUTERS/Wissm al-Okili

Parliamentary speaker Mohammed al-Halbusi expressed full support for protesters’ demands Feb. 17, meeting with a 13-year-old protester whose nickname, Hamid Daghethoum, translates to "pressuring them," as in, pressuring the government. Hamid is known for posting videos of himself on social media, reciting poetry that voices the demands of Nasiriyah's protesters. He posted a video challenging Halbusi to meet with him if he supported the protests.

Hamid is not the only youthful Iraqi who is active in the protests taking place in the squares of Iraqi cities throughout the country.

The current protests are different from ones in years past due to a large number of youths under the age of 18, and many even under the age of 13, calling for the restoration of an Iraqi national identity, something the country has lacked for decades given successive crises, wars and the US occupation, in addition to sectarianism.

Iraqi youths under the age of 18 have been killed, kidnapped and detained while participating in protests. Al-Monitor learned from medical sources that no less than 50 out of the 600 protesters killed in the protests were under the age of 18. These are violations of the UN Convention on the Rights of the Child, of which Iraq is a signatory. It states, “The child shall have the right to freedom of expression,” and provides for “the rights of the child to freedom of association and to freedom of peaceful assembly." It adds, “No child shall be subjected to arbitrary or unlawful interference” and that “the child has the right to the protection of the law against such interference or attacks.”

Fadlallah, 11, has attended the protests in the southern Iraqi city of Diwaniyah since October. “I am joining the protests for the sake of the homeland, which is greater than a mother or a father," he said. "The homeland is sacred.”

He continued, “My generation and I, not any outsider, will be ruling this country.”

Faris Kamal Nadhmi, a political psychology specialist, explained that the participation of children in the protests have both positive and negative impacts on their character in the future. While they learn important concepts like justice and civil protests against injustice, they get exposed to violence that affects their psychological health.

Nadhmi pointed out that the brutality and violence enacted on children during the protests could evoke feelings of existential anxiety. They could come to perceive the world as a brutal, dangerous and insecure place. As they age, they could mistrust others and feel a greater pessimism on human nature. Children could develop post-traumatic stress disorder, depression or suicidal tendencies.

Therese Tayah, a consultant for international institutions in Iraq since 2005, visited Tahrir Square during recent protests. She is afraid of the psychological effects the violence will have on youths. She said violence will have a detrimental impact on their future personalities and could lead to aggressive behavior.

Nevertheless, the youth participation in protests could produce a new generation of Iraqis with an authentic national identity. By participating in peaceful national protests, youths could advocate for justice and claim their rights.

Nadhmi said the protests have created a new reality for youths. From late childhood to early teens, they start identifying themselves as part of the groups of people surrounding them, as well as with their geographic environment. At the age of 11, the development process continues and they become more inclined to criticize this group of people.

​Taya and Nadhmi share the same opinion about youth integration into a particular group at the protests. While scouting Tahrir Square, Taya saw youths cleaning the streets, fixing electricity and sewage problems, and attending seminars on legal, political and social affairs. "I guess that the children taking part in the protests are mostly getting involved in something that is beneficial for their development," she said, "except for the violence that the militias and rogue security personnel exhibited."

Based on that, the protest movement has actually contributed to the development of a new national identity for all — an identity that has been absent in Iraq for decades.