Iraq's parliament passed a new elections law in December in response to massive protests, but the law hasn't been sent to the president for his approval. 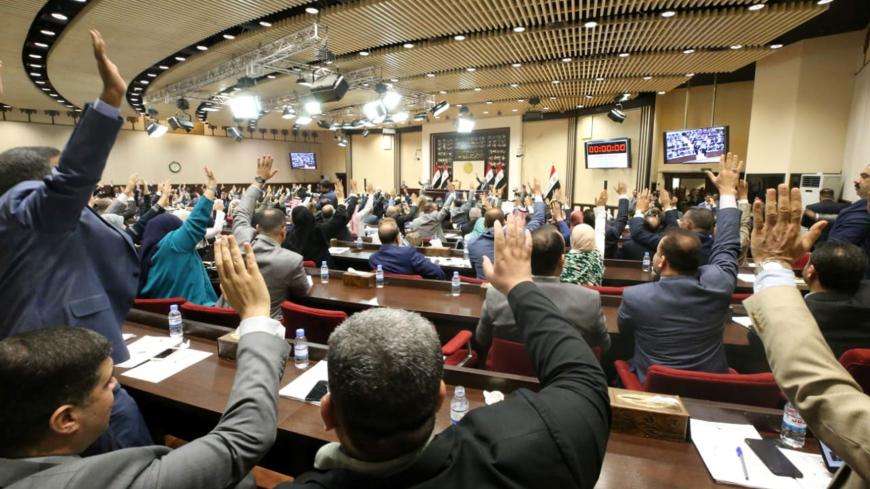 The Iraqi parliament, under public pressure from months of widespread protests, has passed a new electoral law that still leaves protesters and parties representing Kurds and Sunni Arab areas far from satisfied. The law has yet to reach the president's desk to be ratified.

However, it's not just the new law, approved Dec. 24 by the Iraqi federal parliament, that has ignited disputes between political parties, but also a controversial addendum relating to the organization of electoral districts.

The redistricting proposals and the provision allowing for voters to select individuals rather than slates of candidates were considered victories for Iraq’s vast protest movement, in which more than 600 people have been killed and upward of 23,000 injured in the pursuit of political change. Yet the protesters still have some issues with it, including how district winners would divvy up votes.

However, it appears that the country’s major political parties, which initially opposed some of the bill's proposals while it was being considered, have shifted in stance after drafting the additional clause.

The addendum would divide Iraq’s 18 provinces into numerous electoral jurisdictions, with one parliamentarian to be elected for each 100,000 people. Areas with smaller populations would be integrated into districts within the same province. Like the existing law, the new one would designate quotas for women and religious minorities.

According to the Iraqi Constitution, parliament is obliged to send the approved law to the president for ratification, though it doesn't designate a specific time frame for doing so. After receiving the law, the president has 15 days to contest it and return it to parliament; otherwise, the law is considered ratified.

In discussions with Al-Monitor, three parliament members confirmed the law hasn't been sent yet to President Barham Salih. Raad al-Dahlaki, a representative of the National Coalition from Diyala province, attributed the delay to legislative holidays, which started Jan. 20 and last about one month.

Some parties — namely Kurdish and Sunni groups — still disagree over the division of electoral districts, but Dahlaki appeared confident that those differences won't hold up the bill.

Countering this view, Raed Fahmy, a representative of the Alliance Toward Reform and secretary of the Central Committee of the Iraqi Communist Party (a secular alliance with the Sadrist movement), said, “There is an ongoing dispute over the addendum to the new election law.”

As Fahmy explained to Al-Monitor, “There is discussion among politicians that dividing the electoral districts will significantly work to the detriment of around 20% of voters, especially in disputed areas between the federal government and Kurdistan regions.”

Fahmy also indicated another problem: "A large number of the districts created after the occupation of Baghdad in April 2003 did not have administrative boundaries, while there are districts remaining whose borders overlap.” He explained, “The majority of the parties are aware of these problems and that the way the law was passed [intentionally] aims to present obstacles to the early election process demanded by the protesters.” He said the law was passed without due deliberation and without consulting the protesters.

Demonstrations in Baghdad, as well as in central and southern Iraq, have called for the formation of a transitional government to lead the staging of early elections, which haven't been scheduled yet. Iraq's parliament was elected in May 2018 for four years.

However, Fahmy claimed, “Large political parties, especially those with armed factions, will use the law in their own interest to garner votes in rural areas. Some parties will exercise their tribal links to benefit candidates and as political currency to win over the voters, alongside the threat of force by armed factions.”

He added, “There are major objections to the law in its current form, with many of its provisions subject to appeal in the federal court.”

Ahmad Hama Rasheed, a representative of the Kurdistan Islamic Group from Sulaimaniyah province, made similar observations regarding the disputes. As he explained, “The clause … has not resolved the issues that many parties objected to.”

Rasheed told Al-Monitor, “The addendum and the law are still subject to discussion and the law will not be sent to the presidency before an agreement is reached between the various blocs and political parties.” He added, "The law can be sent through consensus among the largest parliamentary blocs." He noted, "Both the new law and its added clause are tailored to suit the larger parties.”

One parliamentarian from a small party from the Kurdistan region, who spoke with Al-Monitor on condition of anonymity, noted, “Large parties can comfortably secure their seats through the new law, while smaller parties must forge alliances among themselves to obtain parliamentary seats, according to vote-counting under the new law.”

Regarding the loss of votes, Rasheed similarly concluded that “merging the small districts will squander the votes of smaller parties, while filtering candidates for clans who do not represent the broader interests of their districts’ residents in the federal parliament.”

Either way, the Kurdish parliament member and representatives of five other small Kurdish parties have resolved to align under the banner of "Group 15," or "G15," excluding the large Kurdistan Democratic Party and Patriotic Union of Kurdistan, with the intention of challenging the new election law in federal court.

In reality, the disagreement among parties that has foiled the law's ratification so far will ultimately postpone early elections significantly, despite the inflamed public's demand that it be implemented without delay.