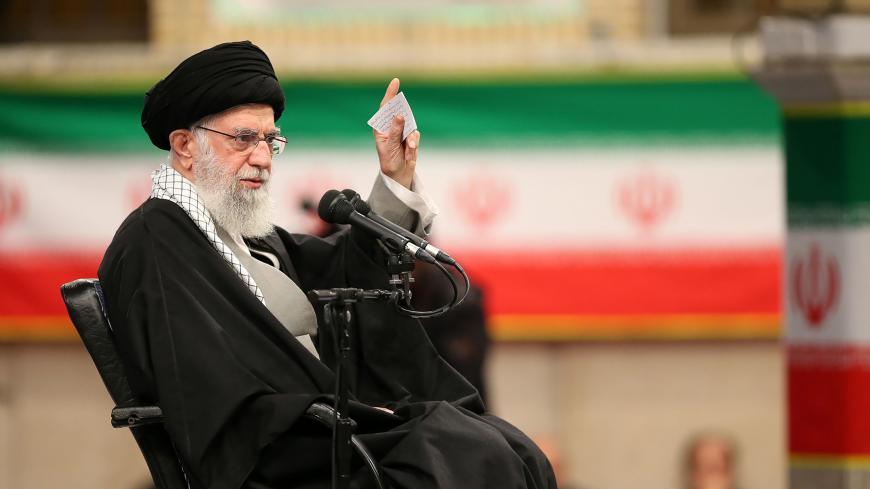 “There are lots of problems in the country, some of which are due to sanctions and some are due to mismanagement,” Iran’s Supreme Leader Ayatollah Ali Khamenei admitted in an address to loyalists in the capital Tehran Feb. 5. “Despite all that, people will come to the battlefield on election day, because it is about the dignity of the establishment and the country’s security.”

Khamenei made the speech ahead of Iran’s parliamentary polls scheduled for Feb. 21. But the run-up to the vote has already been marked by serious questions after sweeping eliminations of moderate and Reformist political forces have made a parliament dominated by hard-liners inevitable.

Under the Islamic Republic's constitution, the Guardian Council, whose members are directly appointed by the supreme leader, vets candidates for parliament. In one of the farthest-reaching purges of rivals ever, the ultraconservative body excluded many senior Reformist figures. The removal has prompted President Hassan Rouhani to question the legitimacy of the vote. Rouhani has warned that the eliminations will render the election a formality that could endanger the Iranian democratic process.

Without directly naming Rouhani, the supreme leader dismissed his stance as “controversy.” “Why is the election a healthy process when it ends in your victory, but it is called defective when it is not in your favor?” According to Khamenei, accusations that the election is being “engineered” will only discourage people ahead of the vote. The Iranian supreme leader threw his weight behind the “trustworthy” Guardian Council, whose spokesman has been openly exchanging barbs with Rouhani over the vetting process.

Iran’s Reformists have in recent weeks been speaking out against an “unfair” race, saying the Guardian Council has left no space for genuine competition. In a Feb. 4 statement, a coalition of Reformist political forces lamented the purge as narrowing the list of candidates too far.

The Guardian Council has often faced allegations of siding with conservative camps and even in some cases manipulating the electoral process in favor of like-minded candidates. Most notably in 2009, the council’s top members endorsed former President Mahmoud Ahmadinejad, whose disputed re-election sent Iran into months of deadly disarray.

“Someone may not favor me, but if they like Iran, they should show up at the ballot box,” Khamenei further said in his speech. The apparent attempt to play the patriotism card came as Iran has faced one crisis after another in recent months, with protesters shouting slogans against the supreme leader and institutions under his command, including the Islamic Revolutionary Guard Corps. Last November, Iranians already squeezed by an economy hit by sanctions and corruption took to the streets against abruptly announced higher gasoline prices. Hundreds were killed in the security crackdown and thousands more put behind bars as the government accused hostile states of instigating the unrest.

Only two months later and while questions regarding the government’s handling of the November protests remained largely unaddressed, IRGC forces shot down a Ukrainian jetliner outside Tehran, killing all 179 people on board, most of them Iranians. It took the Iranian government three days to abandon its denial in the face of mounting evidence. The admission of guilt once again brought Iranians back to the streets with fresh slogans against the supreme leader and the IRGC over the coverup of the tragedy.

In the interval between the two rounds of protests, the Iranian Students Polling Agency conducted a survey that showed a low level of willingness among ordinary Iranians to participate in the upcoming elections. Among other results, the poll found that in Tehran, only 21% of the respondents said they would take part in the vote.