Iran's parliamentary elections are widely seen as a one-sided contest that favors hard-liners. 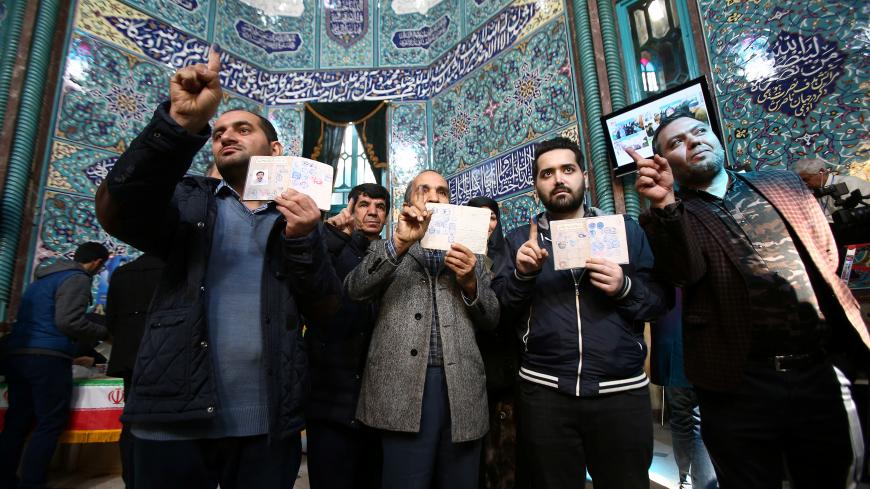 Iranians show their ink-stained fingers after they cast their votes during parliamentary elections at a polling station in Tehran, Iran, Feb. 21, 2020. - Nazanin Tabatabaee/WANA via REUTERS

After a week of lackluster campaigning, Iran held a parliamentary vote Feb. 21, with the country's leadership issuing persistent calls for maximum participation. State media extensively covered what they described as a “passionate presence” by the public, an account disputed by ordinary citizens on social media, who posted images of what they said was evidence of low turnout.

According to Iran’s Interior Ministry, nearly 58 million out Iran's population of 83 million were eligible to elect some 290 lawmakers for the legislative body. The vote was preceded by a contentious removal of Reformist nominees allied with moderate President Hassan Rouhani. The purge by the hard-line Guardian Council had already triggered warnings from the pro-Rouhani camp about voter apathy.

“Had the prominent personalities been given the chance to compete, the turnout would have undoubtedly been higher,” said senior pro-Rouhani parliamentarian Ali Motahari after voting in the capital Tehran. Despite being disqualified, Motahari and other top Reformists refrained from encouraging a boycott.

Yet, weeks before the exclusion of the Reformists, an anticipated low turnout sparked concern. Public disillusionment has grown in recent months due to a host of grievances, ranging from slashed purchasing power and the state’s deadly clampdown on protests in November, to the handling of a Ukrainian plane tragedy in January, which Iran’s armed forces “mistakenly” caused by a missile attack, killing all 176 people onboard.

The polls were supervised by 200,000 state-assigned monitors, as the Islamic Republic does not typically allow international observers to participate at any stage of the election process. Over a decade later, the 2009 presidential vote, which resulted in the landslide reelection — though disputed — of hard-line candidate Mahmoud Ahmadinejad, remains shrouded in rigging allegations. Amid those worries, the Guardian Council — the authority verifying the electoral process — promised the nation that it would “safeguard their votes” in the Feb. 21 polls.

A few days ahead of the vote, Supreme Leader Ayatollah Ali Khamenei appealed to Iranians to observe their “religious duty” by voting. Ultraconservative cleric Ayatollah Ahmad Khatami, in his Friday prayer in Tehran on election day, insisted that the people’s vote will protect the establishment at a time when “good news” is coming from across the region, where Iran’s enemy, the United States, is being ousted by the “resistance,” a term Iranian officials use to describe the militias struggling against foreign forces in the Middle East. Iran’s top military commander Qasem Soleimani, whose Quds Force engaged in the fight against foreign forces, was killed in an American airstrike Jan. 3. According to Khatami, Soleimani's death only heightened anti-US sentiments in the region, counter to US expectations.

Candidates widely played the Soleimani card in recent election campaigning, and it continued to be employed on election day as well, with the ultraconservative Tasnim News Agency reporting that Iranians voted “to prove their loyalty” to the slain general.

But election day was not all about voting. It coincided with an announcement on the spread of the coronavirus, which has already killed at least four Iranians. Over a dozen other cases are now confirmed in Iran, figures that are expected to increase. On Feb. 19, health officials declared two deaths in Qom, 80 miles south of Tehran. Several major cities reported their own cases, an indication that in the days or weeks to come, the Iranian government could be grappling with an epidemic. The deaths have prompted school closures, provoking panic among mask-wearing residents of Tehran.

​Reports of suspected coronavirus cases circulated on social media weeks before the official confirmation, fueling speculation that the government was withholding information from the public to avert a panic that could have marred voter turnout.

​“After the cover-up of the deaths in the November protests and three days of lying in the aftermath of the shooting down of the [Ukrainian] passenger plane, they are now concealing the spread of the epidemic,” tweeted Mahmoud Sadeghi, an outspoken lawmaker and one of the Reformist candidates barred from the election. “Why can’t you stop harming the public trust?” he asked government officials, who dismissed his assertion as an “illusion.”