Aides to the Iranian president have categorically denied fresh reports that he is stepping down. 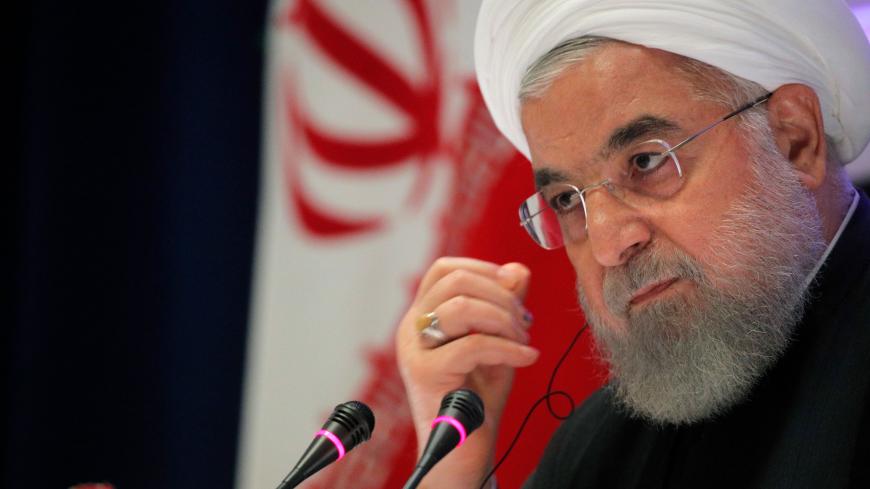 The Iranian government dismissed the latest in a series of reports that President Hassan Rouhani is resigning from his post. Government spokesman and presidential aide Ali Rabiee dismissed the “rumors” in an interview with reporters after a cabinet meeting in Tehran Feb. 12. “As I have written before, Rouhani will stay with the nation to the end of his tenure,” Rabiee declared, adding that he denies “in advance” any other such reports that may surface in the future.

The resignation report has been circulating this week across Iran’s hard-line media with no clear origin. But pro-Rouhani outlets blamed Alireza Zakani, a conservative former lawmaker with close links to the Islamic Revolutionary Guard Corps (IRGC). “The government is seeking to negotiate with [US President Donald] Trump … And if they fail to do so, the president will step down,” Zakani told a meeting of conservatives in Tehran last week. Zakani said his account came from a “Rouhani government official working with the parliament.” But Rouhani’s deputy for parliamentary affairs Hossein-Ali Amiri dismissed the claim as “baseless” and challenged the ex-lawmaker to name the official.

The wish for Rouhani's resignation, nevertheless, has not been exclusive to hard-liners. In the fallout of the deadly November protests against the government’s controversial fuel price hikes, senior Reformist figure Abbas Abdi proposed that the president step down for a snap presidential election to restore stability to the country. Abdi claimed that even some ministers within the Rouhani cabinet had advised the president to do so because they believed that “nothing could be done” to resolve the crisis.

A month later, word spread that Rouhani will resign if the parliament refuses to pass his proposed budget bill for the upcoming Iranian fiscal year (March 21, 2020-March 20, 2021). This time, the denial came from another Rouhani deputy, Mohammed Bagher Nobakht, who heads the country’s Plan and Budget Organization.

In the immediate aftermath of the downing of a Ukrainian jetliner Jan. 8 by the IRGC, Rouhani was reported to have threatened to step down if the corps failed to make the truth public. Iran’s armed forces admitted to shooting down the plane in a statement Jan. 11.

According to Reformist daily Arman, the latest claim about Rouhani's resignation, on the eve of nationwide rallies celebrating the 41st anniversary of the Islamic Revolution, were “fabricated” by hard-line opponents as part of a campaign to undermine the president and his government.

“It is a pity that the news about Rouhani is not true. The resignation could have made us happy,” tweeted Jalil Mohebbi, an ultraconservative cleric and staunch Rouhani opponent. Mohebbi is the secretary of the department for Promotion of Virtue and Prevention of Vice, a judiciary-affiliated entity in charge of implementing strict religious regulations in Iranian society.

In a sign that the Rouhani circle may no longer tolerate such reports, the president’s top adviser Hesameddin Ashena, who has a history of working in the intelligence apparatus, warned, “An organized fabrication of rumors against senior officials … is an act that harms national security.”

Elsewhere, presidential media chief Alireza Moezi called the resignation claim an old trick that lacks “creativity.” Moezzi suggested that by disseminating such rumors, hard-liners are attempting to shift attention from their infighting before the Feb. 22 parliamentary elections.

A mass removal of pro-Rouhani candidates by the hard-line Guardian Council ahead of the vote has enraged the Reformist camp, which has too few prominent candidates for its final list. On the other end of the spectrum, however, an overcrowded conservative camp has too many hopefuls to narrow down. With 10 days to the election, they have released competing lists for the key Tehran constituency and Reformists are celebrating the divides as an indication of deep-lying internal rifts.