Ultraconservatives won the day in Iran’s parliamentary elections, but the saying comes to mind, "Be careful what you wish for." 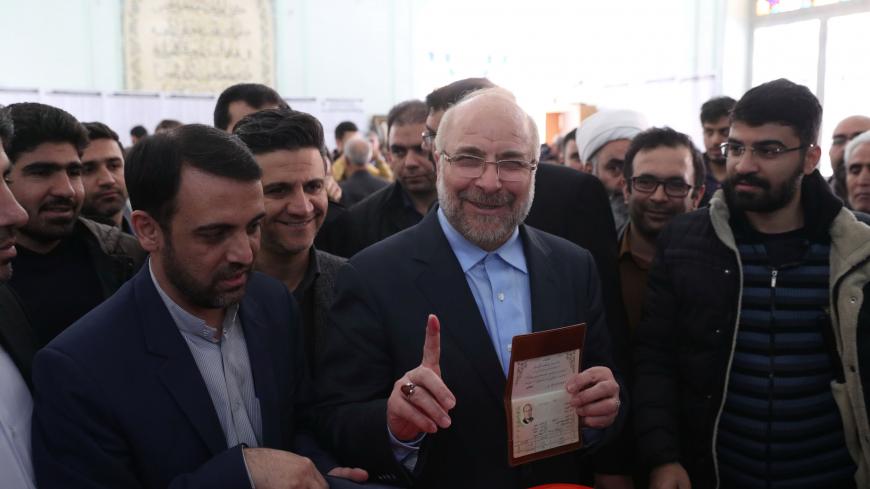 The hard-liners’ victory in Iran’s parliamentary election Feb. 21 seemed clearly predictable, but this did not stop them from celebrating and bragging about how they delivered a big blow to the Reformists.

Perhaps they still felt the sting of previous elections. In 2013, after Reformist-backed Hassan Rouhani’s presidential victory, the Reformists and moderates set their sights on also taking over the parliament in 2016 — and they succeeded. They won all 30 seats in Tehran province, which was a major disappointment to hard-liners and conservatives, who were striving to obstruct Rouhani’s attempt to ink a nuclear deal with world powers.

The 2016 parliamentary race inspired a respectable 62% turnout to pave the way for Rouhani and the Reformists to bring about fundamental change in the country. But neither the Reformists nor Rouhani fulfilled the public’s expectations, angering people as they witnessed how their elected officials caved in and gave up on their promises.

Rouhani and the Reformists sought to carry out change, especially in the area of Iran-US ties, but their efforts were blocked by radicals in Tehran to a large extent. And then, following his election as the US president in 2016, Donald Trump quickly delivered a death blow to the reform current and much of Rouhani’s influence.

This year, voter turnout was a disappointing 42.6% — the lowest since the 1979 revolution — and only about 25% in the capital. Many possible reasons are being given, from dispirited voters, to calls for a boycott, to the coronavirus. The hard-line Guardian Council no doubt discouraged many Reformists from voting. The council holds veto power over legislation and determines which would-be candidates actually reach the ballot. This year the council disqualified dozens of Reformist hopefuls. The Guardian Council, along with the Expediency Council — which resolves the former’s disputes with parliament — have undermined parliament’s power.

For instance, in the past year, Iran’s parliament passed four bills presented by Rouhani’s administration regarding demands by the Financial Action Task Force (FATF) — pertaining to money laundering and terrorist funding — but the Guardian Council and Expediency Council blocked all four.

The Reformists knew months ago that much of their base was adamant about boycotting this year’s election, especially after the Guardian Council stacked the electoral deck with nearly all hard-line and conservative candidates. But some Reformist party leaders’ thirst for power led them to ignore calls for a boycott. Instead, party leader Mohammad Khatami voted right in front of cameras to encourage his base to show up at polling stations. It did not work.

Khatami is usually a cautious figure. He makes minimal demands, not willing to cross the redlines of the Islamic Republic establishment. He has always tried to lead the reform current based on an uncontentious platform.

But a new seed seems to be growing in the minds of the Reformists. There is talk they are looking at former Prime Minister Mir Hossein Mousavi to become the sole leader of the fragile movement. Mousavi has been under house arrest since 2011, after he, as the Reformist presidential candidate in 2009, stated the ballots were rigged.

In the meantime, we are going to witness a change of game in Iran’s politics: The scene is limited to competition among the various groups inside the hard-liners camp, with the Reformists fully excluded from the field.

This kind of scenario has occurred before. In the 1980s, the far-left “Followers of the Imam” (Khate Emami), who are the current Reformists, plotted against religious nationalist groups, including the Nehzat-e Azadi party, and Mahdi Bazargan, the first prime minister of Iran after the 1979 revolution. Their attempt was fruitful.

But the Reformists have regretted their past behavior, as they believe the liberal views of the pro-democracy Bazargan were correct and rational.

Now the ground is set for the hard-liners to once again see their dream come true: chairing the executive branch in 2021, while they already have the parliament and judiciary under their control. In this vein, former top nuclear negotiator Saeed Jalili and newly elected parliament member Mohammad Bagher Ghalibaf — a former mayor of Tehran who is expected to become parliament speaker — along with a number of other hard-liners appear to be in the race to ascend to the presidency.

Ultraconservatives’ domination over the three power branches in Iran would have a slim silver lining for their rivals: Hard-liners and radicals would no longer be able to blame the country’s dire economic situation on Rouhani and the Reformists.

Might it even be possible that the Reformists would welcome such a day, as they are fed up with the far-right obstructing their desired choices for parliament and president, and want to see how their rivals fare running the country based on their radical views?

Some voices propose that the power should be given fully to the radicals so they can enjoy complete authority with no possible obstacles. In a recent interview with local media, Ali Motahari, an outspoken parliamentarian, argues that having radicals rule the legislature and administration would make them realize that they can’t run the country based solely on their extreme views.

It is crystal clear to many people that the hard-liners’ constant criticisms stem from their desire to kick the liberals out of the power centers forever. Nonetheless, in spite of their loud voices, the hard-liners may soften their policies and political positions when they encounter reality.