The Islamic Republic marked the 41st anniversary of its founding as well as the 40th day after the US killing of its top general with state-organized rallies reflecting all-time-high anti-American sentiments. 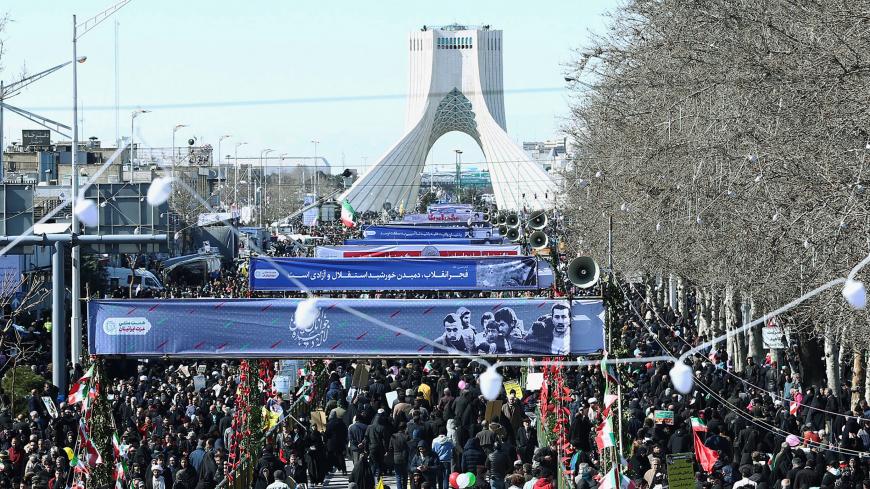 Iranians gather during the commemoration of the 41st anniversary of the Iranian Revolution in Tehran, Iran, Feb. 11, 2020. - Nazanin Tabatabaee/WANA (West Asia News Agency) via REUTERS

Iranians took to the streets nationwide Feb. 11 to hold mass state-organized demonstrations, celebrating yet another anniversary of the victory of the 1979 Iranian Revolution that overthrew the Western-backed monarchical rule of the shah of Iran, Mohammad Reza Pahlavi.

Aside from the typical death slogans targeting the United States and Israel, this year’s anniversary turned into a memorial for Iranian commander Qasem Soleimani, whose death in early January in an American drone strike nearly pushed Tehran and Washington to the brink of all-out war. The event coincided with the 40th day after the assassination, which the Islamic Republic says rallied Iranians behind the flag as Soleimani was a “soldier of the nation” and a nonpartisan figure.

Holding Soleimani portraits, demonstrators renewed calls for retaliation. Iran showered an American base with a barrage of missiles less than a week after the general’s slaying. While the Islamic Republic claimed the strikes killed up to 100 soldiers, the United States — in its last updated account — denied any deaths but admitted that at least 109 service members suffered “traumatic brain injuries.” Iran’s Supreme Leader Ayatollah Ali Khamenei described the missile attack as but “a slap,” and hard-line loyalists insist that true revenge will be exacted only after the United States is fully ousted from the Middle East.

Some participants in the anniversary rally repeated the words of the hard-line loyalists as they carried symbolic coffins of American troops. “We won’t rest easy before corrupting American occupiers are completely expelled from West Asia and the fake child-killing regime [of Israel] is annihilated,” read the rally’s final communique, issued by a government-affiliated entity known as the Revolution Anniversary Committee.

As a sign of defiance to Western pressure over its “nonnegotiable missile program,” Iranian officials also put on display what was said to be state-of-the-art precision missiles at the rally venue in the capital city of Tehran. But missiles from the same arsenal threw Iran into an unnecessary crisis a few hours after the attack against US troops at Al-Asad air base in Iraq Jan. 8. Fired from an Iranian defense battery, the missiles “mistakenly” shot down a Ukraine Airline passenger plane, killing all 176 on board. Addressing the crowds, President Hassan Rouhani admired Iran’s armed forces for their “apology” over the downing. Those forces came out with the admission three days after the plane crash, sparking public rage at the perceived cover-up.

Meanwhile, the anniversary rally came only 10 days before Iran’s parliamentary elections, whose significance was stressed by the official communique. It urged Iranians to “stand vigilant” and participate in the vote in their maximum numbers to help form a parliament that could shepherd the country through “this historic curve.”

As a litmus test for legitimacy, nonetheless, voter turnout in the Feb. 21 polls is already in jeopardy. Apart from public discontent arising from multiple economic grievances, the race for parliament has been marred by a merciless removal of Reformist hopefuls by the Guardian Council, the candidate-vetting body.

Unanimous backing from the same Reformist camp is believed to have helped Rouhani win two landslides in 2013 and 2017. The president has criticized the purge of those allies. In spite of that, Rouhani urged the nation in his revolution anniversary speech not to turn their backs on the ballot box because “election and the ballot box are our saviors.”