Iran's judiciary says arrests have been made in connection with the crash of a Ukrainian plane last week that Tehran blamed on a "human error" by its armed forces. 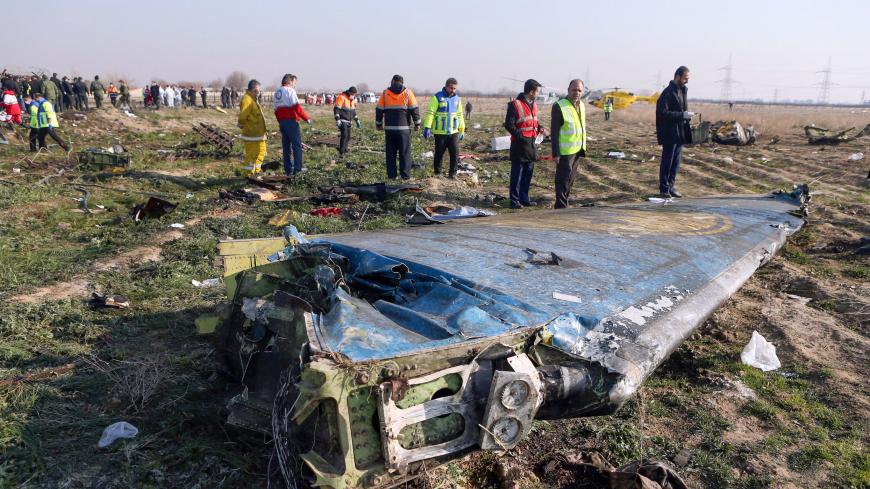 Rescue teams are seen Jan. 8, 2020, at the scene of a Ukrainian airliner that crashed shortly after takeoff near Imam Khomeini Airport in the Iranian capital Tehran. - AKBAR TAVAKOLI/IRNA/AFP via Getty Images

At a weekly press briefing in Tehran Jan. 14, the spokesman for Iran's judiciary, Gholam-Hossein Esmaeili, announced "several" arrests were made in connection with the crash of a Ukrainian passenger jet last Wednesday. All 176 people on board were killed.

It took Iranian authorities three days to admit that a missile battery operator "mistakenly" shot down the aircraft. At the time, the country's armed forces were in a state of high alert in anticipation of a US attack in response to a barrage of Iranian missiles on two American bases in neighboring Iraq.

The judiciary spokesman did not release details on the exact number or identity of those in custody, but said the arrests were part of a wider probe into the tragedy, launched by the country's Judiciary Organization of the Armed Forces upon a directive from Supreme Leader Ayatollah Ali Khamenei.

Appearing in public for the first time following the crash, Iran's President Hassan Rouhani called for a "special court," where those culpable would be put on trial. "It is not that the one individual who pressed the button is to be blamed only. There are others involved and I want this to be explained to the nation with honesty," Rouhani said. The comment appeared to reference higher ranking officers at the hard-line Islamic Revolutionary Guard Corps (IRGC), whose air defense base west of the capital Tehran shot down the plane.

Earlier, government spokesman Ali Rabiei suggested that Rouhani had been kept in the dark by the IRGC about how the ill-fated plane went down, as the president, he said, was informed about the truth more than two days following the deadly incident.

Rouhani's speech appeared as an attempt to soothe public anger, which has gripped Iran amid accusations of a state cover-up of the incident. Nationwide vigils held for crash victims have in most cases turned into calls for resignations and slogans targeting the supreme leader and the IRGC.

Iran's hard-liners, however, have linked the protests to a US and British campaign aimed at discrediting the IRGC and undermining its "achievements" in protecting Iran's sovereignty, including the attacks on the American bases that came as "revenge" for the US assassination of top Iranian commander Qasem Soleimani Jan. 3. A brief arrest of the UK ambassador after he was at the site of one of the protests in Tehran served as enough evidence for those hard-liners to accuse him of "orchestrating the anti-government protests."

A day later, a counter rally was organized by a group of ultraconservative students and young clerics outside the British Embassy in Tehran, where they demanded that the ambassador be expelled. Despite declaring in a Persian tweet that he had left the venue after the chanting of slogans began, Robert Macaire was summoned by Iran's Foreign Ministry over "attending an illegal rally." Still, in the latest, Iran's public procurator renewed calls Jan. 14 for the ambassador to be "immediately" sent home as the judiciary named Macaire "persona non grata."

The Iranians' fury against the government's obfuscations following the crash extended to a wide-reaching boycott of major state-organized art events, which is now trending among the country's celebrities. Defections from the hard-line state-funded public broadcaster in solidarity with the mourning Iranians have also caught many by surprise. "I am sorry for lying to you from state TV for 13 years," female anchor Gelareh Jabbari told Iranians in an Instagram post. She resigned in protest of the state's handling of the plane crash.