Protests break out in Iran after admission of accidental plane downing

Protests erupted in Iran after the government admitted, after three days of denial, that it had mistakenly shot down a Ukrainian passenger plane; some of the demonstrations arose out of vigils for the victims. 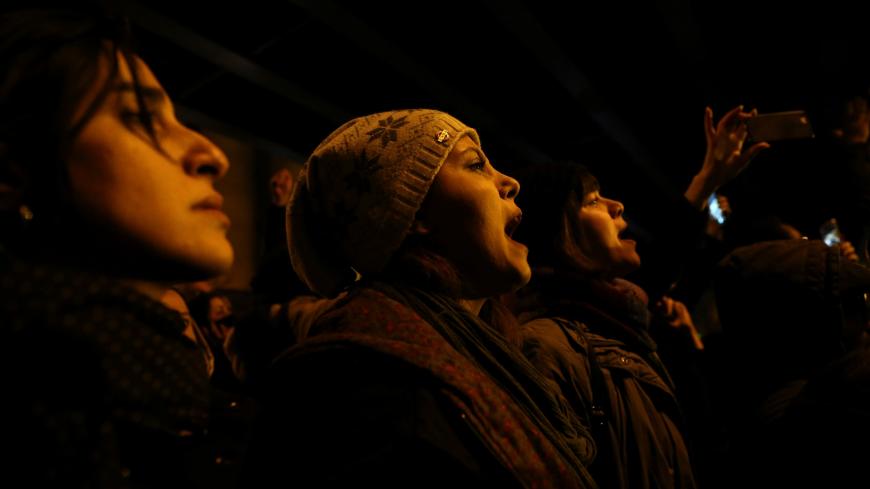 A woman shouts slogans as she gathers with people to show sympathy for the victims of the Jan. 8 downing of Ukraine International Airlines Flight 752, in Tehran, Iran, Jan. 11, 2020. - Nazanin Tabatabaee/WANA (West Asia News Agency) via Reuters

Protests erupted across Iran after Iranian officials admitted they had accidentally shot down a Ukrainian passenger plane that had taken off from Tehran hours after Iran launched missiles at US bases in Iraq.

President Hassan Rouhani issued a Jan. 11 statement saying the Jan. 8 Ukraine International Airlines crash, which killed 176 people, was due to “human error,” adding that it was “unforgivable.” He ordered all of the relevant agencies to compensate the families of the victims and said investigations would continue, adding, “This painful event is not an issue that we can painfully put to the side.”

After Iranian officially accepted responsibility, protests erupted at Amir Kabir University in Tehran. Security forces eventually arrived and shot tear gas into the crowds. Many of the protesters chanted anti-government slogans against both the Islamic Revolutionary Guard Corps (IRGC) and Supreme Leader Ayatollah Ali Khamenei, chants that had been heard during the November protests that were sparked by cuts in fuel subsidies.

British Ambassador Robert Macaire was briefly detained Jan. 11 as a result of the Amir Kabir protest. After his release, he tweeted in Persian that he had attended a vigil for the plane crash victims and that as soon as people started chanting anti-government slogans he left. He added that he was detained 30 minutes after he had left the protests.

At least three Britons died in the crash, as well as at least 82 Iranians, 57 Canadians and 11 Ukrainians

Other protests were reported at Sharif University of Technology. Students set up vigils at other universities, including Tehran University, who lost a student in the crash. Other protests were reported to have taken place also in Esfahan, Rasht, Yazd, Kerman, Shiraz, Hamedan and Boroujerd. According to videos posted online by social media users, protests continued a second night in other cities as well.

Many protesters and even members of parliament said that accepting responsibility was not enough and that individuals needed to resign and be punished. Mohammad Reza Aref tweeted, “As a representative of the people in parliament I want the resignation, removal and punishment of those responsible, who dissembled, and were untruthful with people.”

Another member of parliament, Mahmoud Sadeghi, also tweeted, “In the November [protests] you hid the number of deaths and wounded, if you could have you would also have hidden the reason for the plane crash.” Despite requests and complaints, Iranian officials have never released official numbers of those killed from the November protests — estimates have ranged from 200 to 600.

Many protesters and individuals were angry that immediately after the crash the government was not forthcoming and waited days before accepting responsibility. Other members of parliament said that they would summon Rouhani to parliament, as head of the Supreme National Security Council, to answer questions about the incident. Ali Shamkhani, secretary of the council, denied that there had been intent to hide the truth. He said officials needed to conduct an investigation to make sure there had been no hacking or jamming of their systems in addition to other factors such as “infiltration.”

Amir Ali Hajizadeh, commander of the IRGC's Aerospace Force, conducted a press conference Jan. 11 in which he spoke of finding out about the IRGC's responsibility for the downing, which took place after Iran had conducted retaliatory strikes against US bases in Iraq. These came after the United States had killed IRGC Quds Force commander Qasem Soleimani in a Jan. 3 airstrike in Baghdad.

Hajizadeh said he was so upset about Iran's accidental downing of the Ukrainian plane that “I wish I could die.”

IRGC officials said the plane had been mistaken for a cruise missile.

Hajizadeh added, “We accept all responsibility and any decision officials make, we are committed to implementing it.”