Iran in tug of war over downed plane's flight recorders

The international probe into a Ukrainian plane downed by Iran is facing bumps as Tehran is refusing to transfer abroad the recovered black boxes, while admitting it doesn't know how to decipher the data. 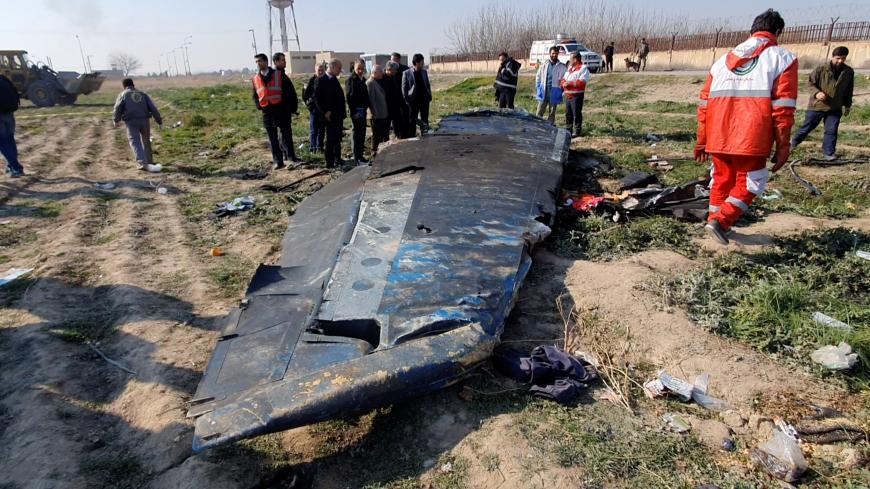 General view of the debris of the Ukraine International Airlines Flight PS752, Boeing 737-800 plane, which crashed after takeoff from Iran's Imam Khomeini Airport, on the outskirts of Tehran, Iran, Jan. 8, 2020, is seen in this screen grab obtained from a social media video. - REUTERS

Nearly two weeks after a Kyiv-bound Ukrainian plane was "mistakenly" shot down by Iran's armed forces west of Tehran, Iranian officials continue to defy international pressure by keeping their grip on the flight recorders recovered from the crash site.

Iran's civil aviation organization released a report Jan. 21 into the details of the incident, acknowledging that the black boxes on the Boeing 737 flight were equipped with advanced technology, making it impossible for Iranian experts to download and decipher the data. The report added that the United States and France had been formally requested to share the needed technology with Iran, a demand that "has not received a positive reply." Iranian authorities, according to the report, are now finding ways to purchase the decoding equipment, insisting they will examine the recorded data inside the country.

The announcement marked yet another reversal in the fluctuating policy Iran has adopted since the plane went down, killing all 176 on board. Tehran has expressed at different intervals openness to send the black boxes to either Ukraine or France for analysis. It is not immediately clear how long Iran will maintain its latest stance, but it appeared to have come in defiance of Ukrainian and Canadian authorities, who have pressed for transparency.

Iran's Minister of Roads and Urban Development Mohammad Eslami was in Kyiv Jan. 20 to deliver a message of condolence on behalf of President Hassan Rouhani. Ukraine said the Iranian minister was informed about Kyiv's position regarding the flight recorders. Tehran, however, cited International Civil Aviation Organization regulations that the country hosting the crash is entitled to decide on the deciphering process. Iranian Foreign Minister Mohammad Javad Zarif has urged the states involved not to politicize the issue.

The Iranian aviation authority's report also confirmed that the air defense batteries operated by Iran's Islamic Revolutionary Guard Corps (IRGC) struck the plane with two missiles, not one, contradicting an initial statement by the IRGC aerospace commander. It took Iranian authorities three days to acknowledge the deadly downing. Despite the admission, the Iranian public has urged accountability and answers to lingering questions that continue to pile up.

"Is there another secret they are trying to hide?" tweeted an Iranian. "Isn't it something even more horrifying than the fact that they downed the plane with two missiles?"

Iran's treatment of the crash victims and their families in the aftermath of the tragedy has also come under serious questioning. In most cases, the funerals have been held under the strict supervision of IRGC forces. The dominance of the official account in the burial ceremonies has pushed some mourners to the edge, removing flags wrapped around the coffins or shouting anti-government slogans only to be met with "batons and electric shockers" at the hands of IRGC officers.