A new poll suggests that voter turnout will be high in today's elections in Iran despite the disqualification of most Reformist candidates. 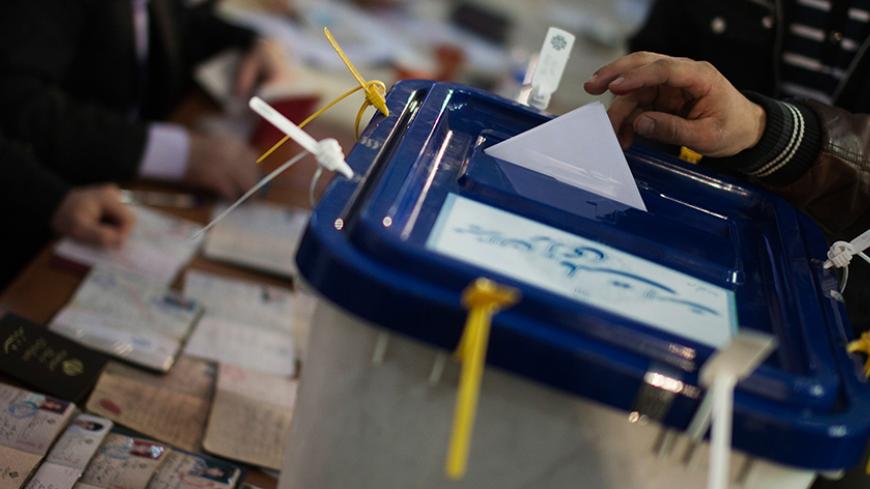 A man casts his vote during the parliamentary elections at a mosque in central Tehran, March 2, 2012. - REUTERS/Morteza Nikoubazl

Despite limited candidate choices, 70-80% of Iranians are likely to participate in the Feb. 26 elections, according to a new poll.

The survey, by Information and Public Opinion Solutions LLC, an independent research service based outside Washington, and shared with Al-Monitor in advance of publication, suggests a favorable outcome for centrists backing the administration of President Hassan Rouhani.

Polling is an inexact science in any country, particularly Iran, but the latest results are similar to other recent surveys in showing an Iranian preference for relative moderates in the restricted political context of the Islamic Republic, where a Shiite Muslim cleric — Supreme Leader Ayatollah Ali Khamenei — has the final say on all key decisions.

Of those polled, 67% said they approved of Rouhani’s job performance, while only 18% gave him a negative rating. Despite the fact that the Iranian economy has not yet rebounded following the recent nuclear deal, Rouhani saw his favorable ratings go up by 13% from a previous poll last July.

The survey showed a wide variety of political sympathies but strongest support for Reformists among the choices on offer. Some 20% of respondents said they preferred the Reformist camp, while only 12% identified with a more hard-line faction known as the Principlists. Interestingly, 44% of those polled said they weren’t sure what group they liked and 11% expressed no preference at all.

Most Reformist candidates were vetted out of the running for this year’s elections for parliament and the Assembly of Experts by the Guardian Council, a 12-member body largely appointed by Khamenei. However, Reformist leaders, including former President Mohammad Khatami, have urged voters to support centrist candidates that back the recent nuclear agreement with the international community and efforts to reform the Iranian economy and open it to Western investment.

Under Iran’s political system, the supreme leader has the final say on all key domestic and foreign policy issues. But the 290-member parliament can obstruct key legislation and the appointment of Cabinet ministers and raise vociferous objections to other government policies.

According to the survey, 43% of Iranians disapprove of the current parliament, which contains many holdovers who came to office under former President Mahmoud Ahmadinejad. Only 28% had a favorable opinion of the body. A near majority of 48% was somewhat or completely dissatisfied with their own representatives in parliament, which was elected four years ago prior to Rouhani’s 2013 victory.

Iranians were more ambivalent about the Assembly of Experts, a body of largely elderly clerics theoretically tasked with supervising the supreme leader and choosing his successor when he dies — a distinct possibility given that Khamenei is 76 and suffers from prostate cancer. According to the poll, 40% approved of the current assembly's performance while 36% had no opinion. Only 10% could accurately name its chairman, an elderly cleric named Mohammad Yazdi.

The moderates’ goal in the assembly vote is to defeat Yazdi and two other arch-conservatives: Ahmad Jannati, an octogenarian who chairs the Guardian Council, and Mohammad Taqi Mesbah Yazdi, who is known as “Ayatollah Crocodile” for his anti-democratic views.

Running against them is a list known as the “People’s Experts,” headed by former President Ali Akbar Hashemi Rafsanjani. Rouhani is also running for the assembly, but the Guardian Council disqualified one of the more interesting candidates, Hassan Khomeini, the grandson of the founder of the Islamic Republic, Ayatollah Ruhollah Khomeini.

Asked in the poll how free their elections are, only 26% of Iranians said the vote would be completely free, while 46% said they would be somewhat free and 13% said not free at all. Those surveyed were split on the role of the Guardian Council, with 43% in favor of vetting candidates and 41% saying voters should have the final say on who can run for elected office.