With the goal of developing and advancing central Sinai, Egypt appears headed toward repartitioning the peninsula, a step that some tribes oppose out of fear their families would be divided. 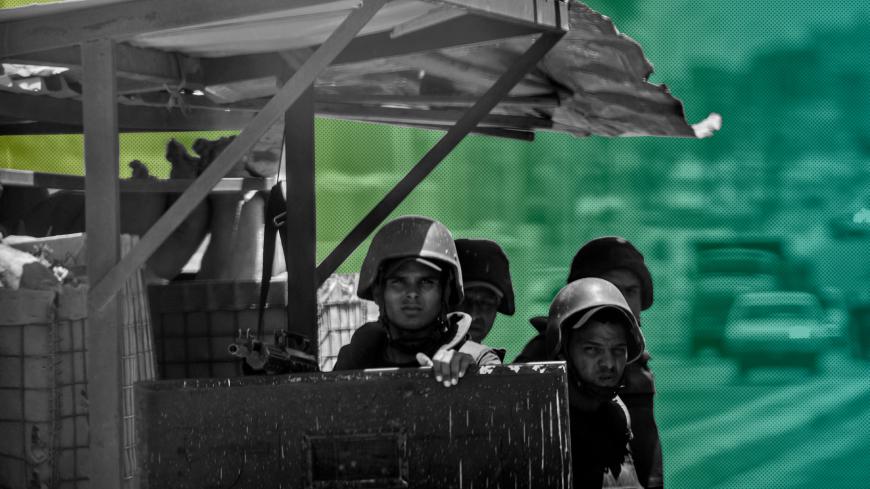 Egyptian policemen stand guard at a checkpoint on a road leading to the northern Sinai provincial capital of el-Arish, Egypt, July 26, 2018. - KHALED DESOUKI/AFP via Getty Images

Egypt seems determined to create a central Sinai governorate, carving out parts of the peninsula's existing northern Sinai and southern Sinai provinces. The result, officials hope, will reduce terrorism in the area and allow the country to take advantage of the region's potential.

Maj. Gen. Khaled Fouda, governor of southern Sinai, told a visiting parliamentary delegation Jan. 19 that a decision would be issued soon on whether to set up the proposed province.

The partition plan dates back years, and was especially notable when then-deputy Prime Minister Abdel Fattah al-Sisi said he would run in the May 2014 presidential election. A proposal to redivide the provinces and establish new cities was part of his platform. After his election, a special committee proposed provincial borders and by December of that year, plans even included an airport for the new province. The government said central Sinai would consist of the southern Sinai towns of Ras Sedr, as the capital, Abu Zenima, Abou Redis, Nuweiba and Taba. Nekhel in northern Sinai would also become part of the new province.

Some Sinai tribes, however, rebuffed the proposal at that time. Sheikh Salemeh Masmah, leader of the Haywat tribe in Taba, said annexing parts of the southern and northern Sinai provinces to form a third could cause problems among the tribes, whose social lifestyles vary. He also noted that mountains would be a barrier to the annexation.

Recently, Sheikh Abdullah Jahama, leader of the Tarabin Bedouins and head of the Sinai Mujahedeen Society, told Al-Monitor, “The decision to create the central Sinai governorate is designed to place the focus on development in the central parts of Sinai, where terrorism hotbeds mushroomed." According to him, the area has much to offer, and "the central parts of Sinai are known for their vast territory, large population and natural resources — most notably the quarries.”

In past decades, the government focused on developing the northern and southern parts of the peninsula, while the central parts lack infrastructure and services. "These will be made available when these parts become their own governorate," he explained.

However, Jahama said, "The Sinai tribes [still] fear that the redemarcation of the Sinai [borders] will break up the families and divide areas where a single family lives. Based on that, the proposal must be raised for discussion among the tribes.”

Rahmi Abd Rabbo, a parliament member representing northern Sinai, told El-Balad news Jan. 18 that establishing a central Sinai province would boost the population there, help develop villages "and contribute to the discovery of the natural resources such as marble, glass sand, coal and cement.” The area also has fertile soil, he noted.

Medical and religious tourism also would benefit from development in the central peninsula, said Attia Moussa, a parliament member for the south Sinai province. “Providing central Sinai with an administrative body and governor of its own would help boost investments," he told Al-Monitor.

Another parliament member, Salama al-Raqiei, told Al-Monitor he had previously proposed establishing a central Sinai province, to include Ras Sedr and administrative divisions for Hasna, Nekhel and Taba.

"There should be an integrated strategy to establish [the central Sinai province], to avoid a cancellation of the decision, as happened to the decisions to set up the 6th of October and Helwan governorates.”

The government abolished a decision to set up the 6th of October and Helwan provinces as separate governorates, deciding instead to keep them as cities in the Giza and Cairo provinces, respectively. The decision had been implemented, but employees and residents of those areas objected because of the ensuing administrative confusion.

Like Jahama, Raqiei noted there are similar concerns now among tribes in towns bordering the proposed province, and some of the communities that would be affected are close-knit. But, he said, officials "will undoubtedly take that into account when demarcating the border of the new governorate.”

He stressed the importance of developing the central peninsula, noting, "The central parts of Sinai are known for its cement industry, mining resources, and marble and coal quarries. They are affiliated with the north Sinai governorate, but lack attention from the government."

According to Raqiei, “[Most of] the residents of the central parts of Sinai welcome this decision, which allows them to benefit from the budget and services of the central governorate’s administrative body. This is because they suffer marginalization and lack services.”

Also, he said, "The state has become aware that the best means to combat extremist [groups] is through development and the resulting scattered populations. Based on that, the work in the coming period will focus on developing the central parts of Sinai that previously suffered from terrorism.”