President Abdel Fattah al-Sisi has proposed during the African Union Summit the formation of a joint African military force to confront terrorism, as part of Cairo’s efforts to boost its presence on the African continent. 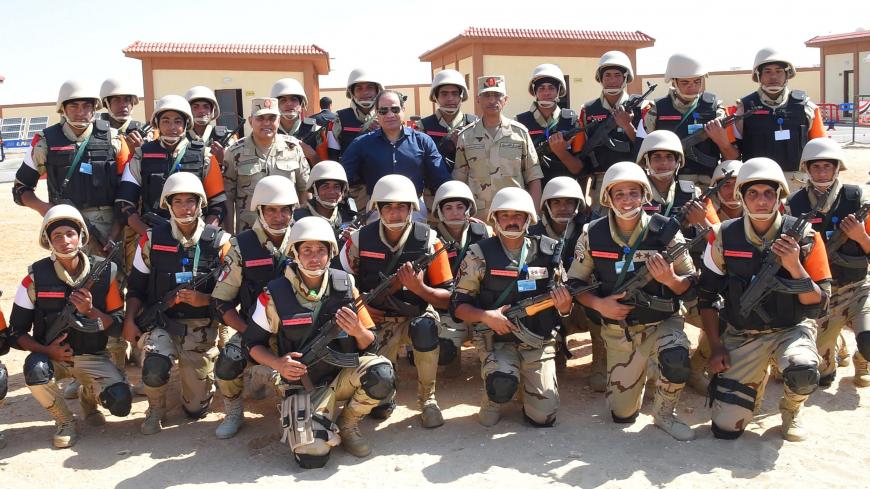 Egyptian President Abdel Fattah al-Sisi (C) poses for a picture with army soldiers during a tour of Ismailia city, Egypt, April 27, 2017. - The Egyptian Presidency/Handout via REUTERS

During the African Union (AU) Summit in Ethiopia Feb. 9, Egyptian President Abdel Fattah al-Sisi put forward a proposal to hold an African summit aimed at establishing a joint African military force to combat terrorism. “The most important challenges facing Africa the past year — during which Egypt chaired the AU — were the ongoing conflicts and the increasing dangers of terrorism and extremism, especially in the Sahel and the Horn of Africa, as well as the challenge of achieving stability,” Sisi said.

In February 2019, Egypt assumed the AU presidency for a year and then handed it over to South Africa this month.

In a comment on Cairo's proposal to establish an African force to combat terrorism, Egypt's ambassador to Ethiopia and its permanent representative to the AU, Osama Abdel Khalek, noted, “African leaders attentively listened to the proposal and the African continent faces many challenges as the Libyan crisis affects the Sahel states. Africa possesses the capabilities to form a military force, but coordination needs to be done in order to implement the proposal.”

He said in a TV interview Feb. 9, “A proposal to hold an African summit to discuss the establishment of an African military force was referred to the African Peace and Security Council and the military and defense committees to discuss the matter from all sides.”

Abdel Khalek added, “The fight against terrorism is not only limited to the military side but includes the exchange of training and security information, as well as military expertise between the member states of the African counterterrorism force.”

Egypt has been recently seeking to boost its presence on the African continent through the military and security axes, and the Egyptian proposal to establish an African force to combat terrorism coincided with Cairo hosting Feb. 9 the chiefs of staff meeting of the armies of the five Sahel countries — Mauritania, Mali, Niger, Chad and Burkina Faso.

The meeting discussed mechanisms to enhance cooperation between the five countries in combating terrorism and exchanging experiences and expertise in the fields of security and defense.

In June 2018, Egypt announced the establishment of a regional center to combat terrorism for the Community of Sahel–Saharan States, which is responsible for exchanging security expertise between African countries and coordinating to conduct periodic joint training in the field of combating terrorism.

Observers believe Egypt’s proposal aims to confront the Turkish military presence in some African countries such as Somalia and Libya.

In 2017, Turkey established a large military base in the Somali capital, Mogadishu, at a cost of about $50 million. In January 2020, Turkey announced that Somalia had invited it to explore for oil in its waters. Turkey now also has a military presence in the Libyan capital, Tripoli, following the conclusion of the security agreement between Ankara and the Libyan Government of National Accord. On Jan. 21, Turkish President Recep Tayyip Erdogan announced the dispatchment of military advisers and trainers to Tripoli.

Member of parliament Amin Massoud said in a statement Feb. 10, “The Egyptian proposal to form an African military force to confront terrorism has aroused the concern of countries and regimes that finance, encourage, arm and harbor terrorism like Turkey.”

“The establishment of the African anti-terrorism force will eliminate any attempts to interfere in the internal affairs of all African countries and will ensure security and stability in Libya as well as the permanent elimination of terrorist and mercenary militias loyal to Turkey inside Libya,” he added.

Meanwhile, Maj. Gen. Kamal Amer, chairman of the parliamentary Defense and National Security Committee, told Al-Monitor, “The proposed African summit on forming a military force would discuss the studies of the participating delegations on ways of forming this force and its role in resolving military disputes, its costs, the location of training and who will be in charge of leadership.”

Amer noted, “Egypt understands that African countries want to build a military force to support them in facing terrorist movements that threaten stability.”

Tarek Fahmy, a professor of political science at Cairo University, told Al-Monitor, “The African countries welcomed the Egyptian proposal to form an African military force for several reasons, the most important of which is Africa’s need of a military force from within the continent to confront terrorist threats.”

He added, “The African countries are leaning toward Egypt to implement that proposal, given the Egyptian army’s strength and experience in confronting terrorism internally and externally through its participation in international peace-keeping forces, in addition to Cairo's membership in the African Peace and Security Council. Consequently it has the ability to put forward the proposal and discuss it within the council.”

On Feb. 7, Egypt became a member of the African Peace and Security Council for the period 2020-22. The council is responsible for settling disputes and maintaining peace and security in Africa.

Fahmy added, “Egypt aims to bridge the security gaps in Africa by eliminating terrorist movements to thwart countries that take advantage of these crises to make their way to Africa.”

Representative of the parliamentary African Affairs Committee Majed Abu al-Khair told Al-Monitor, “African countries need a military force that does not seek to achieve personal interests and goals within their territories — as is happening in Libya, in which a number of foreign powers intervened under the pretext of fighting terrorism.”

Khair added, “Egypt is eligible to provide support and training in addition to sharing its experiences in confronting terrorism in the Sinai Peninsula with African countries suffering from these terrorist crises.”