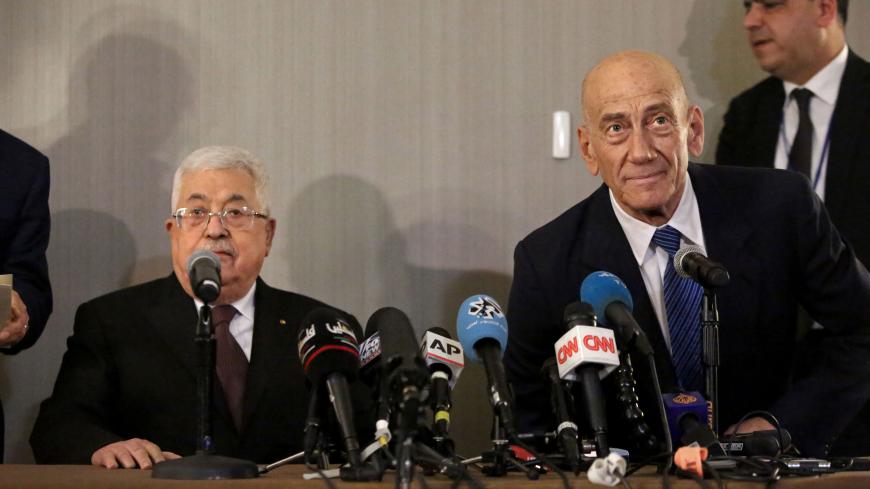 GAZA CITY, Gaza Strip — Palestinian President Mahmoud Abbas and former Israeli Prime Minister Ehud Olmert held a press conference Feb. 11 in New York City to oppose the US peace plan known as the "deal of the century" and to discuss reviving the Olmert plan to solve the Israeli-Palestinian conflict.

The two sides had negotiated the Olmert plan in 2008 before Olmert was forced to resign in September 2008 amid corruption allegations. This put the negotiations on hold.

The press conference was held on the sidelines of the special session of the United Nations Security Council, which was held Feb. 11, to discuss the US peace plan. During the session, Abbas announced his rejection of the US plan and presented a document signed by 300 Israeli officers who reject the US peace plan.

At the press conference, Abbas said he is ready to pick up negotiations from where he left off with Olmert in 2008 under the umbrella of international legitimacy and not on the basis of the Israeli and US “plan of annexation.”

A Palestinian official close to the Palestinian presidency told Al-Monitor that the meeting between Abbas and Olmert was held upon the request of the latter in order to find an alternative to the US peace plan and revive the plan presented by Olmert to Abbas in 2008.

The official pointed out that during a meeting held between the two sides before the press conference, Olmert reiterated his call on Abbas to agree to the plan in order to thwart the US peace plan. However, the official added, Abbas refused this request and indicated that issues related to the border, Jerusalem and refugees still need to be discussed and negotiated in order for Palestinians to approve of the plan.

Asked about the Palestinian criticism Abbas received after his meeting with Olmert, the official said, “We do not have the luxury to repel parties willing to stand by our side in rejecting the US peace plan.”

“Every individual that stands by our side strengthens our position before the world. President Abbas does not mind sitting with other Israeli figures who oppose the US plan,” he added.

On Feb. 12, Israeli Prime Minister Benjamin Netanyahu described Olmert's move as a “low point in the history of Israel.” The day before, Israel's permanent representative to the United Nations, Danny Danon, described the meeting as “shameful.” He added, “On the same day that Abu Mazen [Abbas] failed to condemn the US and Israel in the Security Council, Olmert chose to support Abbas and give a tailwind to the Palestinians’ diplomatic terrorism.”

Olmert's plan to resolve the Israeli-Palestinian conflict included the establishment of Palestinian and Israeli states and land swaps between the two sides. Among other things, the plan proposed Israel’s annexation of 6.5% of the West Bank that would include a large number of Israeli settlements, with 5.8% of the annexed land to be compensated for through land swaps. The plan also called for Israel's evacuation of 10 settlements established in separate parts of the West Bank and the Jordan Valley. The plan also outlined a land corridor between the Gaza Strip and the West Bank.

The Palestinian presidency rejected the plan in August 2008 and dismissed it as a violation of international legitimacy resolutions. The presidency said it would only accept a Palestinian state along the borders of June 1967 with East Jerusalem as its capital. Abbas also called for the complete evacuation of the West Bank settlements and for a land corridor between the West Bank and the Gaza Strip.

Joint List Knesset member Jamal Zahalka told Al-Monitor that the Abbas-Olmert meeting aims at creating a state of opposition within Israel to the US peace plan by reviving the Olmert plan.

Zahalka said the attempt to revive this plan is not likely to succeed because of Olmert's weak political influence in Israel. In addition, he said, the large Israeli parties reject this plan.

He also warned Palestinians against accepting discussions related to the plan, which he said is no less dangerous than the US peace plan, especially in aspects related to Jerusalem, borders and the refugee issue.

The meeting between Abbas and Olmert hit the headlines of Israeli newspapers Feb. 12.

The same day, a member of Hamas international relations office, Basem Naim, launched an attack against the meeting and said it was “based on illusions and delusions.”

“It is very unfortunate that President Abbas met at this specific time with a man who directly contributed to the killing of thousands of Palestinians,” Naim added.

Alaa al-Rimawi, the director of Al-Quds Center for Israeli and Palestinian Studies in Ramallah, told Al-Monitor that the meeting between Abbas and Olmert is one of the worst meetings ever held between Palestinian and Israeli officials. He said Abbas’ advisers deceived him when they convinced him to meet with Olmert and hold a joint press conference to reject the deal of the century because the latter is accused of corruption and is politically doomed.

Rimawi said that attempts on the part of the two leaders to revive the Olmert plan will not be of any benefit in light of the Israeli and Palestinian opposition to the plan. He added that the meeting showed that the Palestinian Authority (PA) literally has no cards to confront the US peace plan with.

Abdel Sattar Qassem, a political science professor at An-Najah National University in Nablus in the West Bank, concurred. He told Al-Monitor that the meeting aims at reviving the Olmert plan to resolve the Israeli-Palestinian conflict, and warned the PA against accepting to return to the negotiating table to discuss the plan in the absence of political options to confront the deal of the century.

Qassem said that confronting the US peace plan should not be done through such meetings. The PA should take serious steps toward ending internal division, rebuilding Palestinian institutions capable of playing an effective role and encouraging resistance in all its forms.

The attempts to revive the Olmert plan will likely not come to fruition in the absence of an international sponsor and in light of the major Israeli parties’ support for the US peace plan that Trump announced in late January.