The White House declares victory as the UN Security Council holds off on issuing a resolution reiterating old parameters for a two-state solution. 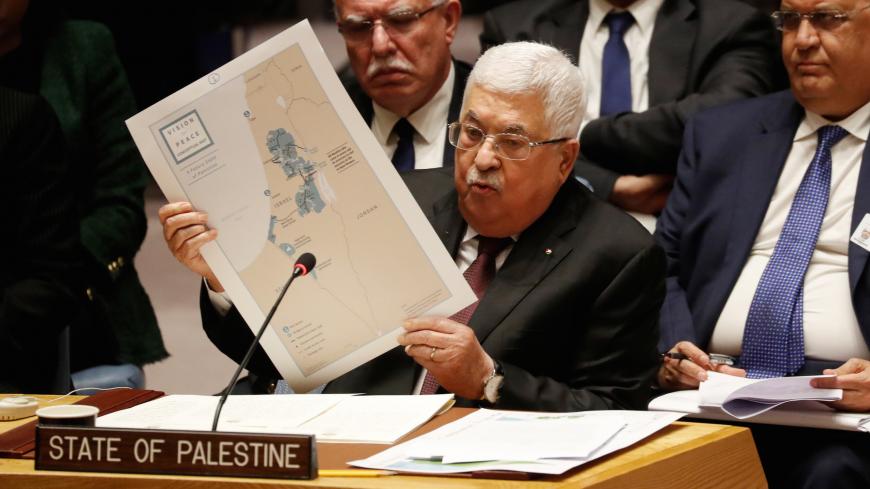 Palestinian President Mahmoud Abbas holds a map while speaking during a Security Council meeting at the United Nations in New York, US, Feb. 11, 2020. - REUTERS/Shannon Stapleton

The Israelis and Palestinians met in New York today, but it was in opposition to US President Donald Trump’s peace plan.

After addressing the UN Security Council, Palestinian Authority President Mahmoud Abbas and former Israeli Prime Minister Ehud Olmert held a joint press conference in a New York hotel suite where each called the other a man of peace.

Abbas is “a man of peace" and "opposed to terror,” Olmert said, adding that after having more meetings with Abbas than any Israeli leader, he believes the message should be that Abbas is the only partner for peace.

But while rejecting Trump’s proposal as an Israeli-designed “annexation” plan, Abbas also rejected violence and called for Israeli-Palestinian peaceful coexistence. “Let us coexist in peace,” he said.

“Trump and [Israeli Prime Minister Benjamin] Netanyahu are not waiting for the Palestinian approval on this deal,” Abbas said in an English translation of his remarks to the UN Security Council provided by the Palestinian mission to the UN. “The announcement came as a provocative short notice for the Palestinian people that this Israeli/American vision is already underway to confiscate/annex what remains on the ground.”

US Ambassador to the UN Kelly Craft described the Trump plan as an opening bid to stimulate discussion, not a take-it-or-leave-it ultimatum.

“I think that the president’s vision for peace has allowed for a conversation on hope,” Craft told journalists after the UN meeting today. “We just need to make certain that the two parties, who are the only ones who can make this happen, come to the table.”

But former US Middle East peace envoy Martin Indyk said Craft’s portrayal of Trump’s plan as flexible and not an ultimatum was not true.

“Under the plan, Israel gets to annex East Jerusalem, the Jordan Valley and ALL the Israeli settlements independent of any Israeli-Palestinian negotiations,” Indyk wrote on Twitter.

Five European Union nations — France, Belgium, Germany, Estonia and Poland — issued a joint statement saying that while they value efforts to find a peaceful resolution to the Israeli-Palestinian conflict, the Trump plan departs from the internationally agreed parameters they remain committed to.

“In line with the long-standing EU position, we remain committed to a negotiated two-state solution, based on 1967 lines, with equivalent land swaps, as may be agreed between the parties, with the State of Israel and an independent, democratic, contiguous, sovereign and viable State of Palestine, living side by side in peace, security and mutual recognition,” the five EU members said in a joint statement delivered by Belgium’s foreign minister. "The US initiative, as presented on Jan. 28, departs from these internationally agreed parameters."

Such statements aside, the Trump administration declared victory over the fact that the Security Council backed off issuing a resolution supporting the old parameters for a two-state solution, and mocked what it called the “calcified” Palestinian position.

“Today, by not putting forward a polarizing resolution, the United Nations Security Council demonstrated that the old way of doing things is over,” a senior US administration official told journalists in a statement. “For the first time on the Israeli-Palestinian issue, the council was willing to think outside the conventional box, and not reflexively fall back on the calcified Palestinian position, which has only allowed the failed status quo to continue.”

“We are optimistic that countries are keeping an open mind with regard to our Vision for Peace, and are willing to have an honest and open discussion on it as a possible basis to restart negotiations for a realistic two-state solution,” the White House statement continued.