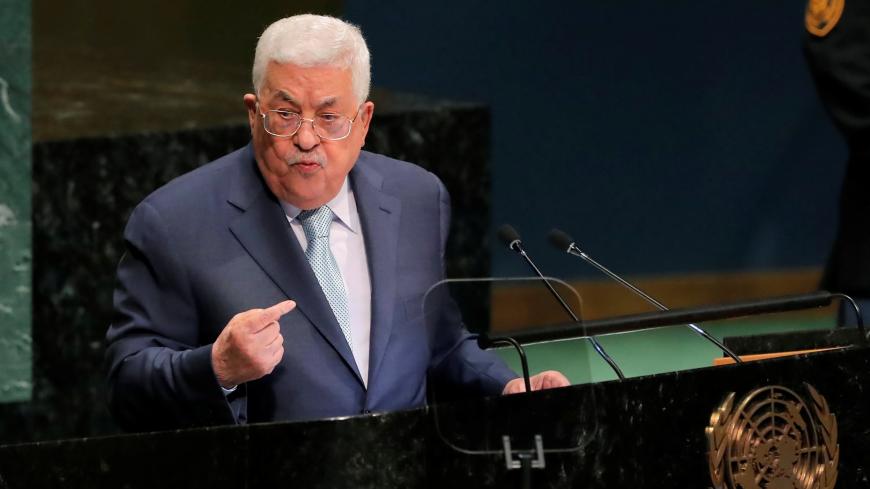 NEW YORK — Palestinian Authority President Mahmoud Abbas told the United Nations today that he and his team tried for a year to engage the Donald Trump administration on the peace process only to have their views rejected in decision after decision. They now are looking to the international community to preserve a two-state solution, Abbas said, bypassing the Trump administration.

“We have always fully and positively engaged with the various initiatives of the international community that have aimed at achieving a peaceful solution between us and the Israelis,” Abbas told the UN General Assembly. “We continued on this path with the administration of President Trump from the start of his tenure, with the same positive engagement, and I have met with him numerous times."

Abbas said, “We awaited his peace initiative with utmost patience, but were shocked by decisions and actions he undertook that completely contradict the role and commitment of the United States toward the peace process.”

President Trump, meeting with Israeli Prime Minister Benjamin Netanyahu on the sidelines of the UN Wednesday, said he was inclined to favor a two-state solution to the Israeli-Palestinian conflict.

“I like two-state solution,” Trump said. “That’s what I think works best.”

Trump reasoned that cutting off aid to the Palestinians would eventually pressure them to come back to the table. And he seemingly offered to reconsider those aid cuts.

But Palestinian officials said they were not impressed with Trump’s apparent endorsement of the two-state solution.

“Every time he [Trump] meets Netanyahu, he repeats the same statement,” Palestinian Authority Foreign Minister Riyad al-Maliki said at a press conference here Wednesday night. “It is nothing new.”

Palestinian officials said they feel positive after a meeting on the sidelines of the UN to discuss how to advance a two-state solution that preserves Palestinian rights — a meeting that pointedly did not include the United States.

Though representatives of some 40 countries and international organizations attended the meeting, including eight foreign ministers, the United States was not invited and did not attend, Maliki said.

“We are not interested to enter any war with the Americans,” Maliki said. “We ask the Americans to comprehend we have a just cause. We want to achieve our basic rights. We are producing a diplomatic, legal track in order to achieve that.”

Trump, for his part, said his administration might reveal its peace proposal in the next two to four months, but said he wanted to get Israeli and Palestinian support for negotiations before unveiling it.

“I want to have a plan … that is solid, understood by both sides — really, semi-agreed to by both sides before we start a negotiation,” Trump said.

“I would say over the next two to three to four months … that would be the time that I’d like to at least release the plan,” Trump said. “Again, it has to be good for both parties.”

But neither Israeli nor Palestinian leaders seemed to be counting on Trump’s peace plan emerging soon.

Netanyahu, in his address to the world body today, focused not on prospects for peace negotiations, but on making hyped-up charges against Iran.

“You call Israel racist? This is not the way to peace,” Netanyahu said. “This body should not be applauding the head of a regime that pays terrorists. The UN should condemn such a despicable policy.”