Behind its strong condemnations, Turkey is quietly accepting the new status quo in and around Idlib. 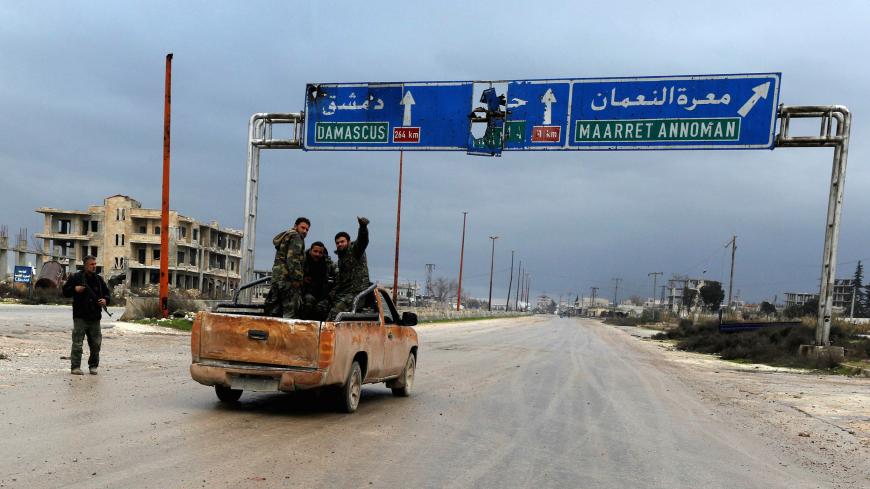 Ankara offered a rare and forceful rebuke to Moscow when Russia-backed Syrian regime forces recently captured a strategic town in the northwestern province of Idlib, but Turkey does not seem to have many options to change the course of events.

The Syrian regime forces captured the strategic town of Maaret al-Numan some 20 miles (32 kilometers) south of Idlib city, the last stronghold of the Turkey-backed opposition groups. Three Turkish observation posts have come under siege as of the recent regime advances, putting Turkey, which had promised to establish a demilitarized zone in Idlib under the 2018 Sochi deal between Ankara and Moscow, in a tight spot.

Although Ankara seems determined to keep its troops in the region, Turkey did nothing as the regime advanced, disappointing rebel forces awaiting Turkey’s support.

The opposition forces are upset for three reasons: The Turkish observation posts set up for de-escalation proved to be ineffective, Turkey’s decision to send Syrian fighters to Libya to support one of the warring parties in the country has weakened the opposition ranks and the opposition believes Turkey reconciled with Russia to give covert consent to the regime's offensive.

Ramped-up contacts between Ankara and Moscow before the seizure of Maraat al-Numan fed that perception. Following the Jan. 8 phone conversation between Turkish President Recep Tayyip Erdogan and Russian leader Vladimir Putin, Turkish and Syrian spymasters met in Moscow on Jan. 13. The Syrian forces’ rapid advance toward Idlib is thought to be as the result of a quiet agreement between Ankara and Moscow.

According to a well-connected source in Damascus, the meeting between Turkish spy chief Hakan Fidan and his Syrian counterpart Maj. Gen. Ali Mamlouk followed a phone conversation between the leaders of the two countries. “This meeting paved a way for a consensus on operation against Idlib,” said the source on condition of anonymity.

Furthermore, the Turkish authorities are said to have held meetings with commanders of two major Syrian opposition groups — the Syrian National Army and the National Liberation Front — in southeast Turkey Jan. 15 to bring them up to date about negotiations with Russia.

The Turkish side reportedly informed the opposition commanders that Moscow promised a 15-day cease-fire in exchange for opening of the strategic M4 and M5 highways — essentially admitting that it will not be able to maintain the cease-fire agreement that designated four de-escalation zones.

The 2018 deal between Putin and Erdogan in Sochi aimed to create a demilitarized zone around Syria’s rebel-held province of Idlib through the de-escalation zones, the removal of groups deemed terrorists and the opening of the M-4 and M-5 highways. Yet Turkey failed to fulfill its commitments by the deadline at the end of last year.

Hayat Tahrir al-Sham (HTS), deemed a terrorist group, seized control of some 90% of Idlib. In this respect, Maraat al-Numan had a particular strategic importance as it was the stronghold of the opposition factions that were fighting against HTS.

Since the three of the four de-escalation zones have already come under the control of the Syrian government forces, the 15-day cease-fire did little more than create a short break to establish three checkpoints through which to evacuate civilians.

Following the announcement of the cease-fire on Jan. 9, Turkish Defense Minister Hulusi Akar said Turkey and Russia reached an agreement on how to implement the cease-fire. Accordingly, three humanitarian corridors have been opened in al-Habit, Abu al-Duhur and al-Hadr, linking southern Idlib to Hama, eastern Idlib to Hama and northeastern Idlib to Aleppo, respectively. The locations of the crossings hint that the arrangement made between Moscow and Ankara aimed to prevent civilians from piling up on the Turkish border by directing them toward areas controlled by the regime.

After the Jan. 24 deadline for the Russian-brokered cease-fire, the Syrian forces resumed operations and captured 24 towns and cities in only four days.

In addition to residential areas, the Syrian government forces backed by intense Russian airstrikes also captured a military base in Wadi Deif that had been under HTS control since 2014 and a key strategic location.

The opposition groups say that the Syrian government forces are using scorched-earth tactics and that the regime has abandoned all of the Russian-led restraint mechanisms Moscow was using to alleviate Turkey’s concerns and maintain its cooperation with Ankara.

The capture of Maarat al-Numan, which had been under the control of the Syrian rebels since 2012, is significant in several ways: The town was one of the most important bastions of the Turkey-backed opposition groups that are hostile toward HTS. Thus it is a big loss not just for the rebels but also for Erdogan’s already disrupted Syrian agenda. Also, the Syrian government has made great progress toward opening the M5 highway connecting Aleppo to Hama, Homs and Damascus.

Following the capture of Maraat al-Numan, Saraqib, standing at the intersection of M4 and M5, is the next important target before the Syrian forces move toward Aleppo. The rapid fall of Khan Tuman, a town southwest of Aleppo only 24 hours after Maraat al-Numan hints that the Syrian army’s advance will be faster than expected.

Some reports, meanwhile, suggest that the Syrian army will secure Kafr Nabl and Kafr Sajna west of Maraat al-Numan before advancing toward Saraqib to counter possible attacks by the Syrian opposition groups positioned in Zawiya.

Should the Syrian regime forces take this route, another of the Turkish observation posts could come under siege.

The Syrian regime forces could also move toward northeast Latakia and western Idlib, which would lead to the reopening of the M4 highway, delaying action against the opposition forces.

However, the mountainous terrain between western Idlib and the Latakia countryside hosts several tunnels and many experienced fighters who have nowhere else to escape, setting up a scene of intense combat between the two sides.

Turkey's response to the situation has been limited to issuing firm warnings and dispatching a convoy of 30 military vehicles, 12 of them armored, to Saraqib.

Ankara has sharpened its messaging, as it usually does when the status quo in Idlib is shaken. Turkey’s Defense Ministry said that Ankara will respond to any threats to the Turkish observation posts “in the strongest manner without any hesitation.”

Erdogan leveled a rare direct criticism at Russia, saying that the Astana process on Syria “has become moribund” and said that Turkey will take “necessary actions.”

But what can Turkey really do? There is no clear strategy on the horizon. Erdogan’s remarks seem to be intended for domestic consumption and mirror Turkey’s hope to slow the Syrian regime’s offensive in Idlib. The only option left for Turkey is to set up buffer zones along the Turkish border until the Syrian Constitutional Committee convened Oct. 30 in Geneva completes its work.

In other words, Turkey is quietly accepting the new status quo in the region, though it does not hesitate to issue strong condemnations.

There is also a possibility that Russia will broker a pause in the offensive after the regime forces open the M4 and M5 highways.

Turkey believes the buffer zone may alleviate the refugee pressure on its borders. According to the Syrian Observatory for Human Rights, some 505,000 people have escaped Idlib since Dec. 1.

For Turkey, Idlib’s fate is bound to that of the other regions under the control of Turkey-backed opposition groups. Thus, Erdogan would apparently like to keep Idlib in his pocket for future negotiations over Turkey's military presence elsewhere.