Statements from the Pentagon throw into question Trump's justification for the US strike on Qasem Soleimani. 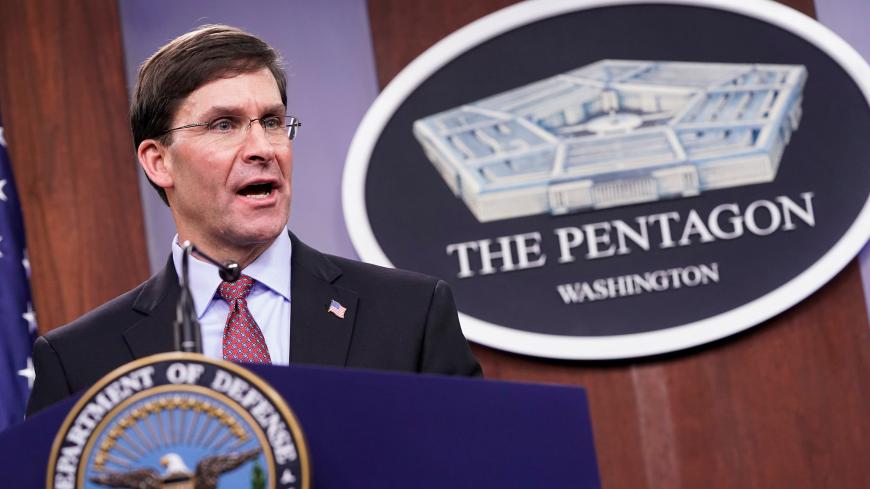 US Secretary of Defense Mark Esper speaks during a joint news conference with Japan's Defense Minister Taro Kono at the Pentagon in Washington, US, Jan. 14, 2020. - REUTERS/Joshua Roberts

Defense Secretary Mark Esper would not provide clarity today on a possible threat to US embassies from Iran-backed groups that prompted the Donald Trump administration to launch a deadly strike against a top Iranian military leader earlier this month.

Trump stated in an interview on Fox News Jan. 10 that Iran would have targeted four American embassies in the Middle East if he had not authorized a Pentagon drone strike to take out Quds Force chief Qasem Soleimani Jan. 3. But Esper said Sunday he hadn’t seen specific evidence pointing to such a plot.

"I've spoken a lot about Iran this week and I have nothing more to add," Esper told reporters today at a joint press conference at the Pentagon with his Japanese counterpart. So far, the administration has not provided a proven "imminent" threat from Soleimani to justify the strikes, frustrating lawmakers on both sides of the aisle.

During Tuesday’s meeting, Japanese Defense Minister Taro Kono sought to encourage the United States to engage diplomatically with Iran, citing “persistent diplomatic efforts” to bring the Trump administration and the Islamic Republic back to the table for talks. Last year, Trump rebuffed a Japanese offer to serve as a go-between for dialogue, and Prime Minister Shinzo Abe warned of an uptick in clashes between the two rival nations.

Japan has approved nearly $5 billion for a military mission in the Middle East to protect Japanese ships in the region. But Kono said Japan would be limited from participating in the US-led International Maritime Security Construct or its European alternative. "We have some constitutional restrictions, so we will not be participating in the American or European initiative," he said.

Japan had one merchant ship damaged in the Arabian Gulf last year.