Despite their disagreements, Moscow and Ankara have good reasons to cooperate on Libya. 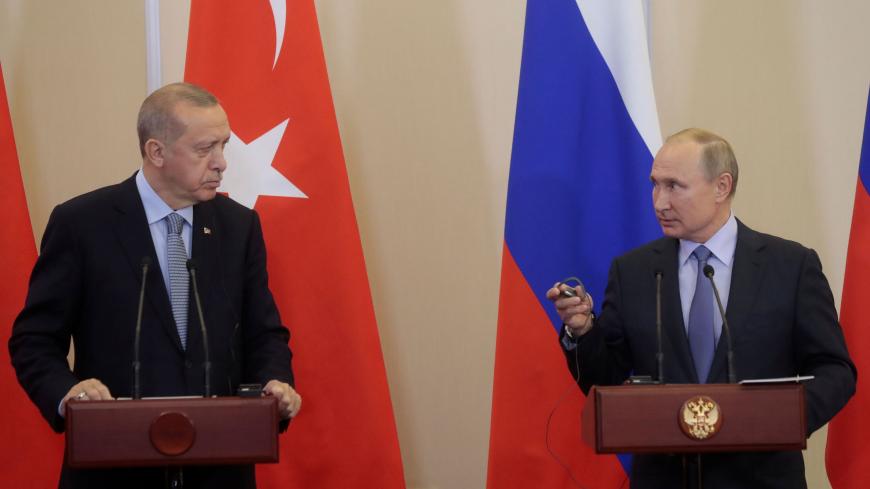 Russian President Vladimir Putin will travel to Istanbul Jan. 8. Putin’s visit is officially dedicated to the launch of the TurkStream natural gas pipeline, which extends from Russia to Turkey, but Putin will also discuss with President Recep Tayyip Erdogan bilateral economic and military cooperation, as well as Syria and Libya.

Al-Monitor previously reported that Moscow and Ankara were considering a potential deal over Libya, according to sources in the Russian Foreign and Defense ministries. The deal would likely replicate the “Astana model,” which Turkey, Russia and Iran applied to the settlement in Syria. The goal for both Moscow and Ankara is to minimize the influence of other regional — and especially nonregional — powers, and establish themselves as principal kingmakers in the Libyan conflict. This would satisfy their ambitions to claim a new power-center status in the Middle East and North Africa.

The “Syrian model” goes beyond the Astana process, although, in the case of Libya, replicating the same framework will likely be central to Russian-Turkish efforts in the coming months.

Moscow has earned significant foreign policy benefits with its military campaign in Syria. One of its most important achievements is arguably how the Kremlin changed the perception of itself: Once seen — and rightly so — as a party to the conflict, Russia is now accepted as the conflict's mediator — one who can strike compromises and impose political decisions toward a peace process.

This has made Russia a desirable mediator in other regional conflicts. Saudi Arabia, for instance, wouldn’t mind having Russia mediate the conflict in Yemen, providing that Saudi interests are duly observed. Egypt and the United Arab Emirates have approached Russia on a few occasions to enlist its support for their own agenda in Libya.

Until now, while evidently willing to aid settlement of these crises, Russia has dodged playing a direct and open role in Yemen and Libya. The conflict in Syria held a lion’s share of its attention, while ongoing hostilities in Idlib and a shaky stalemate in northeastern Syria have prevented Moscow from directing its limited resources in other directions.

Yet the power and trust that Russia has accumulated among regional stakeholders with its Syria campaign is running thin. To preserve its role as a key regional player, Russia feels it must continue to act. This implies not just proposing general initiatives, such as the Gulf security concept Moscow presented in July 2019, but to practically contribute to solutions of other regional crises. Given that the role and policies of both the United States and the EU are dubious and indecisive, respectively, this is an opportunity for Moscow to design its own security architecture before the United States and the EU can get their act together. All of this appears to have driven Russian policymakers to act more proactively on the Libyan front.

Unlike in Yemen, however, Russian interests in Libya are more clearly articulated. Russia hopes to reclaim the oil and railroad construction contracts it lost after the fall of Moammar Gadhafi. Libya is also a strategic location, both as a close energy source for Europe and a source of illegal migration to European countries. Should Russia secure a foothold in Libya, Moscow will receive new leverage in its relations with the West, in particular the EU.

In dealing with Libya, Russia is yet to overcome some elements of its Syria model when it acts both as a party to the conflict and a mediator. The moment for Russia to become a “pure mediator” is still not there, which means Russia will have to plug away at its mediator role by first engaging with one warring party. This model, which has been tested in Syria, may provide Russia with the results it seeks. However, it imbeds Russia deeper into the conflict and may entail greater risks. This may include a loss of the party Moscow supports if Hifter suffers defeat at Tripoli, and if Moscow and Ankara fail to find a compromise that will either reinforce or at least allow Hifter to save face.

Unlike in Syria, where Moscow had no other option but to support Bashar al-Assad, Russia’s support for Hifter wasn’t predestined. Closer cooperation with Hifter was largely shaped by Hifter’s own initiative with the Russians. For instance, Hifter hit the right tone as a "new Gadhafi" who, among other things, may have reassured the Kremlin that supporting him was a way to overcome their guilt over the toppling of Gadhafi. (Some in the Russian government feel Gadhafi's end was made possible after Moscow abstained from voting on the resolution to establish a no-fly zone in Libya.) Besides, Hifter and forces loyal to him promised lucrative contracts to some powerful Russian oil tycoons should Russia support their party.

By printing money for Hifter and deploying private military contractors — first, merely, for demining operations — a pro-Hifter lobby formed in Moscow. Soon, the scope of gray zone activities expanded into the deployment of additional mercenaries and the use of “shady air carriers” — or air logistics companies — whose activities in Libya enrich their Russian owners' deals.

At the same time, by gradually lifting up Hifter, Russian units — be they government-linked or private — have secured dominance in the logistics of the Libyan National Army (LNA). Russian units have supplied supplementary parts for LNA weapons, provided military training and operations planning for LNA forces, and guarded high-profile commanders and strategic infrastructure. All of this makes Hifter rely even more on Moscow, which may later prove handy for Russia should it decide to exert greater pressure on him for the sake of political dialogue with Prime Minister Sarraj. In this sense, Russia’s support for the LNA doesn’t seek to land Hifter a victory per se, but rather secure leverage over decision-making in the conflict.

It is also debatable what course Moscow’s relations with Tobruk would have taken should Tripoli have acted in a more proactive manner vis-a-vis Russia. So far, Sarraj’s government has failed to offer Moscow sufficiently lucrative conditions for cooperation, neither was it persistent in its pursuit of Russian sympathies. That said, being aware of the risks that one-sided support for the LNA may bear, the Kremlin is still willing to engage Sarraj. In recent weeks, the bilateral contacts between Moscow and Tripoli have indeed been boosted.

Turkey has staked its own interests on the internationally recognized government of Sarraj and now seeks to bolster his position with additional military deployments. This, in turn, makes Sarraj more dependable on Ankara, whose political position he will not be able to ignore. Should Russia and Turkey each pressure the warring parties, a peace process in Libya may be possible. These efforts, however, may be derailed by other powerful players with their own stakes in the Libyan conflict. Therefore, both Russia and Turkey seek to back up their initiatives with the support of other regional players like Tunisia, Egypt and Algeria.

By uniting efforts, Russia and Turkey may reach their respective geopolitical goals in a more effective manner than if they pursued this path alone. This was the case in Syria, and this will likely be the case in Libya.