Israel-Greece-Cyprus take on Turkey in the Mediterranean

Trilateral cooperation among Israel, Greece and Cyprus to build a natural gas subsea pipeline is setting the stage for more tensions with Turkey in the Eastern Mediterranean. 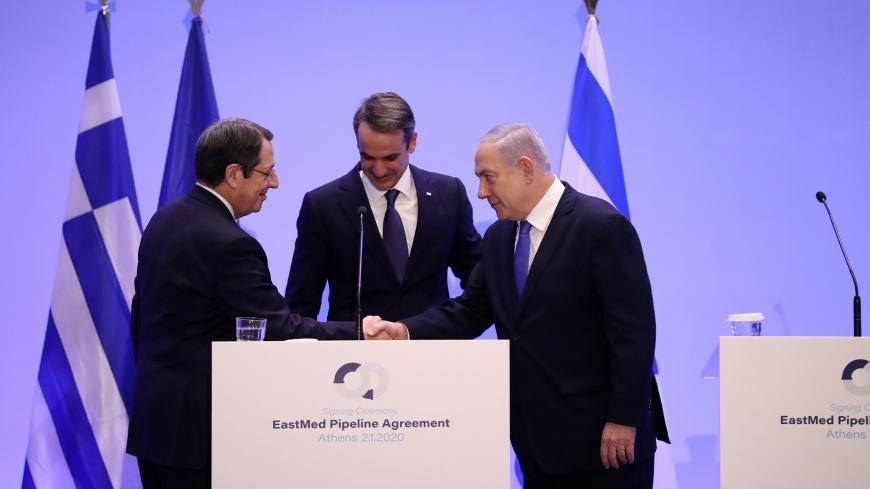 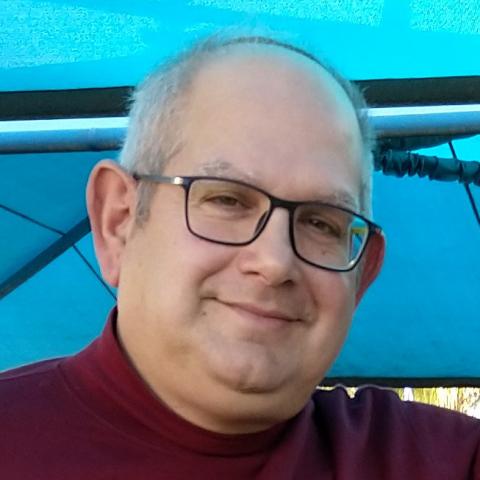 The Israel Defense Forces published its annual intelligence assessment Jan. 15 and for the first time reportedly included the aggressive regional policies of Turkish President Recep Tayyip Erdogan as a top danger to watch, but it does not foresee a direct confrontation with Turkey in 2020. Rather, a closer look at the currently chilly relations between Israel and Turkey reveals potential escalation manifested not only in the political realm involving the Palestinians or battling terror, but also in the energy sector.

On Jan. 2, Israel, Greece and Cyprus signed an agreement to build a subsea pipeline to carry natural gas from Eastern Mediterranean gas fields to Europe. The EastMed project will transport natural gas from Israeli and Cypriot offshore gas fields to Italy and then on to the rest of Europe, providing the continent with a steady supply of non-Russian gas. Alongside this diplomatic success, however, the project has also further escalated the crisis between the three signatories and Turkey in the arena of natural gas and in general.

The signing of the pipeline agreement marks the latest development in a decade of steadily increasing trilateral cooperation after Israel discovered gas beneath its territorial waters. Energy cooperation accelerated a year ago, with the creation of the Eastern Mediterranean Gas Forum (EMGF). This unique platform, which aims to promote regional cooperation in the field of energy, now includes the original three countries together with Egypt, Jordan, the Palestinian Authority and Italy. France has asked to join, and the United States wants permanent observer status.

Israeli Prime Minister Benjamin Netanyahu remarked at the signing ceremony, “This is a historic day for Israel, because Israel is rapidly becoming an energy superpower, a country that exports energy.… This is also a historic day because the cooperation between Greece, Cyprus and Israel is growing stronger. This is a true alliance in the Eastern Mediterranean that is economic and political, and it adds to the security and stability of the region.’’

Netanyahu’s enthusiasm aside, there is less to the current gas agreement than meets the eye. Its economic viability, with a global gas glut and low gas prices, is unclear. In addition, the technological and security challenges of what will be the longest and deepest underwater pipeline in the world are daunting. Some experts believe that liquefaction in Egypt’s existing and planned gas liquefaction plants might well be a better alternative.

Israel is already enjoying the diplomatic fruits of the pipeline endeavor before the digging has even begun. Relations between Israel, Greece and Cyprus also extend to a political framework, with regular ministerial and leader summits, and increased security and military cooperation, in particular joint exercises. In a roundabout way, the key to this burgeoning alignment is Turkey’s increasing assertiveness in regional issues as well as the poor state of Israeli-Turkish relations since Erdogan's rise to power and especially after the 2010 Mavi Marmara incident. From the perspective of Greece and Cyprus, visible cooperation with Israel contributes to deterrence vis-à-vis Ankara.

Indeed, Turkey has reacted negatively to the pipeline agreement. It sees the EMGF as an additional instrument by which to contain it geopolitically in the Eastern Mediterranean and to exclude it from the recent gas bonanza. More so, the new project threatens Turkey’s strategy of becoming a major East-West energy hub. On Jan. 8, Erdogan and Russian President Vladimir Putin inaugurated the TurkStream gas pipeline, running from Russia to Bulgaria. There also appears to be a genuine desire by Turkey’s leadership to assert hegemony in its close environs and assume the Ottoman-era mantle as a naval power in the Mediterranean littoral. This quest is reflected in Ankara's agenda for expanding Turkey's naval force, with an addition of more than 20 ships expected over the next three years.

Apart from military and diplomatic motivations, Turkey's energy and naval policies also serve domestic purposes. Confrontation with non-Muslim powers, especially Cyprus, is popular with Erdogan’s base in the Justice and Development Party as well as with his non-Islamist, nationalist coalition partners.

Ankara has therefore been pushing back against “encirclement” by the Eastern Mediterranean strategic architecture that Israel and Egypt are trying to jointly develop. It sent drilling ships, with naval escorts, to conduct gas exploration in waters claimed by Cyprus and also by the so-called Turkish Republic of Northern Cyprus. Turkish naval forces threatened Cypriot survey ships in the disputed areas and in late November forced an Israeli survey ship to leave the area.

Also heightening tensions was Ankara’s Nov. 27 announcement of an agreement with the internationally recognized Libyan government, led by Prime Minister Fayez al-Sarraj, demarcating nautical boundaries and bisecting the Mediterranean by ignoring the existence of Greek islands. For Turkey, the agreement with Libya was clearly aimed at “leapfrogging” the EMGF and blocking the prospective route of the pipeline running toward Italy, thus frustrating Cypriot hopes, frightening potential investors and compelling the parties to engage Ankara.

The timing of the EastMed signing was apparently intended to challenge Turkey's maneuvering. Ankara's maritime border agreement with Libya was buttressed by stated Turkish intentions to assist Sarraj with a supply of fighters. Recent joint efforts on a cease-fire in Libya by Ergogan and Putin, who supports Gen. Khalifa Hifter and the rival government there, point toward success for the Turkish gambit.

Can the Israeli-Turkish rivalry get out of hand? Israel sees Turkey under Erdogan as a rival, albeit one secondary to more pressing and violent enemies. The current tensions have unfolded amid Israel's plans to begin pumping gas from its offshore Leviathan field for export to Jordan and Egypt, which it did Jan. 15

Netanyahu has defined gas production, and specifically gas for export, as crucial to Israel’s long-term economic security. Israel's arrangement for cooperation on gas in the Eastern Mediterranean and the trilateral strategic alignment are key components of his long-term vision for Israel as an extra-regional power as well as a short-term election-season narrative of strategic virtuosity and success. In attempting to negate this achievement, Turkey may be evolving into a higher-tier threat.

Ankara reportedly recently offered to discuss the gas issue with Israel. Having no interest in engaging Turkey in open hostilities, Israel has publicly played down the anti-Turkish aspects of the regional alignment it is shaping. Increased tensions could threaten Israel’s crucial seaborne trade. In addition, a clash between Israel and a NATO member state would be a daunting situation. Also dictating a measured and non-confrontational position is Israel's understanding that Greece and Cyprus would not be capable of or disposed toward militarily significant countermeasures of their own.

It is not, however, improbable that Israeli and Turkish naval forces will shortly be deployed to project national power and protect real and potential assets. As noted, there has already been one (non-violent) incident between Turkish and Israeli vessels, in November. Also, Turkey dispatched warships to visit North Africa in late December, early January and is reported to have deployed armed drones to Turkish Cyprus.

The importance of the gas and navigational issues to both Israel and Turkey, the lack of adequate crisis-management mechanisms between the two countries due to atrophied diplomatic and military-to-military relations and the need by both nations' leaders to appear forceful and not back down all serve to raise the potential for friction at sea that could escalate. The possibility of violence between Israel and Turkey has increased, and while not yet high, is no longer negligible.