Dozens of world leaders who arrived in Jerusalem to commemorate the 75th anniversary of the liberation of Auschwitz were turned into extras on Prime Minister Benjamin Netanyahu's election stage. 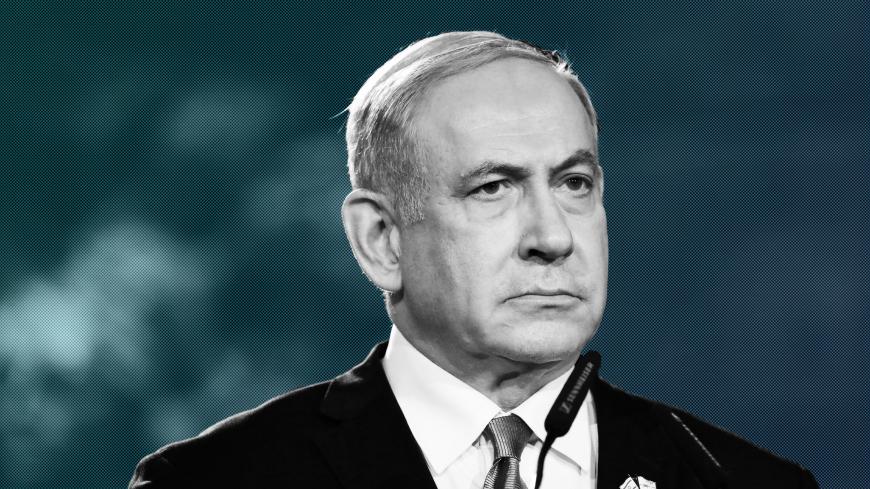 One of the best-known Shakespearean soliloquies was affirmed this week in Israel when Prime Minister Benjamin Netanyahu hosted dozens of world leaders at the World Holocaust Forum in Jerusalem. “All the world's a stage, / And all the men and women merely players, … / And one man in his time plays many parts,” says the character of Jaques in “As You Like It” — and the glittering Jan. 23 production was exactly as Netanyahu likes it. The commemoration event was carefully orchestrated to prove that not only are world leaders not boycotting Israel, they are willing to visit and pay their respects. They provided incontrovertible proof to all the skeptics who believe the world is lined up against Israel that one leader protects them from all the boycotts and stands firm in the face of dark forces — and his name is Benjamin Netanyahu. Israelis watched the show, rubbed their eyes in wonder and amazement, and were forced to concede that “only Netanyahu can.”

The Fifth World Holocaust Forum was held in Israel for the first time, marking the 75th anniversary of the liberation of the Nazis’ Auschwitz death camp. The timing could not have been better for Netanyahu — just days before the Knesset is scheduled to begin deliberations on his request for immunity from prosecution on charges of corruption (Jan. 28), and five weeks before another round of elections that will determine his fate (March 2). “King Bibi,” as his admirers like to call him, managed to bring together on one stage Russian President Vladimir Putin, US Vice President Mike Pence, French President Emmanuel Macron, Britain’s Prince Charles, German President Frank-Walter Steinmeier and some 40 other kings, princes, presidents, prime ministers and parliament members from Europe, Australia, Canada and the United States. All were deployed as extras in Netanyahu’s one-day production, providing him with the glamorous backdrop designed to prove that he is a “leader in another league,” as his campaign slogan says, and to outshine his political rival, Benny Gantz.

The “Shoah festival” was the curtain raiser for Netanyahu’s election campaign, officially launched Jan. 21 in Jerusalem in a kind of small rehearsal for his activists, during which a video clip was screened showing Gantz stuttering. Netanyahu even imitated his stammer. The point was clear — see which one of us can only stutter while the other draws world leaders to Israel. While the media coverage focused on Netanyahu throughout the commemoration event, Gantz was forced to make do with limited airtime.

When the curtain came down on the Holocaust Forum in the evening hours of Jan. 23, a surprise awaited the world. It seemed the show was not, in fact, over. Another act was on the way, this one just as spectacular and more meticulously planned, scheduled to take place at the White House on Jan. 28. After numerous delays, with precise and deliberate timing, US President Donald Trump plans to unveil his "deal of the century" for Israeli-Palestinian peace on the very day the Knesset in Jerusalem launches deliberations on Netanyahu’s request for immunity. That was why the US president invited Netanyahu and Gantz to the White House at very short notice to hear his plan, which apparently does not stand a chance of being realized. The whole thing is so transparent, so clear, and yet impressive. The president of the United States is gearing up to help Netanyahu ahead of the March elections, what more could the Israeli leader ask for?

An anonymous source in Gantz’s opposition Blue and White party told Haaretz that when Knesset Speaker Yuli Edelstein announced that the Knesset would begin the Netanyahu immunity request process on Jan. 28, “we surmised that he did so knowing that Netanyahu and Gantz were being invited to the White House that day.” The source noted that at this stage, Blue and White does not intend to demand the Knesset discussions be postponed. However, the source added, on that day Israelis will see Netanyahu being warmly welcomed by Trump, while at the same time the Knesset — i.e., the Blue and White opposition) is engaged in picayune matters — undermining the man who just this week brought all the world leaders to Jerusalem in an unprecedented airlift.

The right-wing Israeli media and the court reporters serving Netanyahu all year round went out of their way this week with their plaudits. Shimon Riklin, who was reportedly offered a place on the ticket of the religious right HaBayit HaYehudi party, tweeted, “Netanyahu is teaching everyone a lesson with the generous help of the world’s leaders. What genius. Simply unbelievable. In sports, even Barcelona [soccer club] rivals cheer a brilliant Messi goal.”

Riklin is seemingly right, and all that remains for Israelis to do is to decide whether to give up this bountiful good just because of a few scandals. For Netanyahu’s sworn fans, this is a no-brainer. They are convinced the Israeli media and political left have produced trumped-up criminal charges against their leader, forced the police to investigate and the prosecution to carry out a “coup” to unseat him (as Netanyahu himself claimed).

Those faced with a real dilemma are Israelis who still believe in the state’s legal and judicial system and will have to decide whether — in light of the show they saw this week in Jerusalem and the one they will see next week in Washington — they could forgive Netanyahu for his missteps and weaknesses and give him another chance to lead the country. That is exactly what Netanyahu is working on. The way he sees it — as do his admirers and associates in the Likud — trampling the institutions of government and the rule of law and inciting against them is allowed as long as one is accorded a White House welcome or given a pledge from Putin of positive consideration for the release of Naama Issachar, a young Israeli woman jailed in Russia on drug charges. She may well be set free at a time most profitable for Netanyahu, perhaps even on a date very near election day.

As of this writing, there is no polling data yet to gauge whether the Jerusalem “Holocaust festival” orchestrated by Netanyahu boosted support for his Likud party. Either way, his Blue and White party and other political rivals probably understand they are dealing with a political conjurer, who successfully dwarfs them in the diplomatic arena. As far as they are concerned, in order to defeat him they must convince those who are still not persuaded that the rule of law is a foundation stone of Israeli democracy and no one is above it. Even if he does not manage to put on a spectacular production of 45 leaders/extras who turned Israel into the center of the universe in the eyes of its residents.