Iraq president calls for restraint after meeting Trump in Davos

Stressing the need for reforms to address youth unemployment and security, Iraqi President Barham Salih said "this is not time for another conflict" after meeting with his US counterpart in Davos. 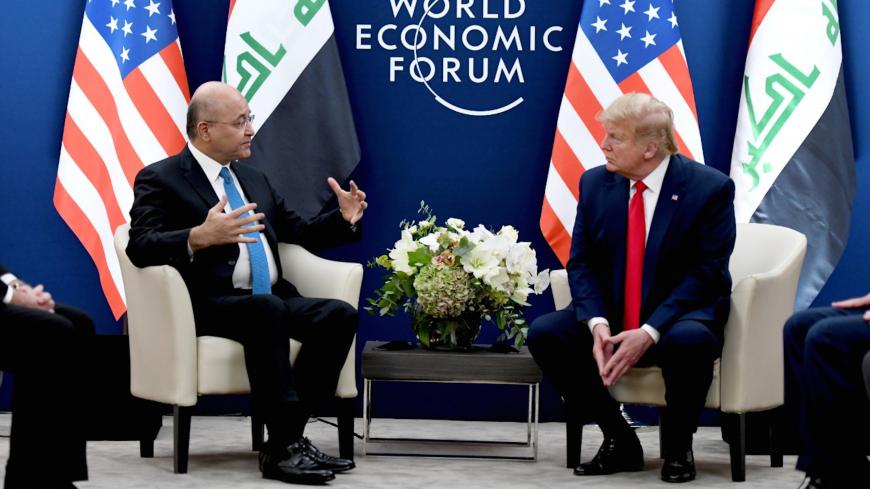 US President Donald Trump meets with Iraqi President Barham Salih during the 50th World Economic Forum in Davos, Switzerland, Jan. 22, 2020. - The Presidency of the Republic of Iraq/via REUTERS

Iraqi President Barham Salih said he had a very good and candid conversation with US President Donald Trump at Davos today, in which Salih said he repeatedly urged restraint and stressed that the region cannot afford another conflict. His comments referred especially to the US-Iran escalation that has ramped up amid the Trump administration “maximum pressure” campaign against Iran, and in particular after the US killing of Iranian Maj. Gen. Qasem Soleimani in a drone strike at the Baghdad airport earlier this month.

“This is a dangerous moment,” the Iraqi president, who is a Kurd, said in a question and answer session with journalist Fareed Zakaria following Salih’s speech to the World Economic Forum in Davos, Switzerland, today. “The Middle East does not need another conflict.”

“We have had a very good conversation with the president [Trump], and we had a very candid conversation [about] the need for basically restraint, calming things down,” Salih continued. “This is not time for another conflict. In my conversations with many actors in the region, everybody, everybody, almost everybody is saying, ‘This is getting out of hand. Please cool it down. Restraint.’”

Iraq, coming out of 40 years of conflict and the recent US-led fight against the so-called Islamic State (IS, also known as ISIS), needs to focus on jobs, education, infrastructure and good governance, and not squander resources in more conflict, Salih said.

“Our young people are demanding jobs,” Salih said. “We need reforms. We need to rebuild the territories that ISIS destroyed. … These are the priorities. … We need today 12,000 new school buildings.”

“So, I can say it with as much passion as I can muster: This part of the world does not need another conflict,” Salih repeated. “Because look at the past decades of war and conflict, what have they achieved? Only squandering resources and more people made homeless and more extremism propping up.”

Trump, meeting with Salih at the forum earlier today, seemed to tone down earlier threats to punish Iraq with sanctions or other penalties if it followed through with a recommendation by the Iraqi parliament to ask foreign forces to leave Iraq. But Trump also gave no indication if he was prepared to reduce or reshape the US troop presence out of sensitivity to Iraqi political dynamics.

“Well, we’re talking about a lot of different things, and you’ll be hearing whatever we do,” Trump told reporters at his meeting with Salih, when asked what plan there was for pulling US troops out. “But they like what we’re doing and we like them, and we’ve had a very good relationship.”

Trump punted when asked if he was still considering US sanctions on Iraq. “We’ll see what happens because we do have to do things on our terms,” Trump said.

Trump responded, without much seeming concern about Iraqi sensitivities, by expressing US interest in the Iraqi oil business. “And we’re also involved with them in their oil business, and that’s always been very important from their standpoint and from our standpoint,” Trump said. “So we have a lot of very positive things to talk about.”

Abbas Kadhim, director of Iraq Initiative at the Atlantic Council, said the challenge for Iraq is that the Trump administration seems to see any drawdown of US forces in Iraq at the moment as giving the optics of victory to Iran.

“Both sides (the US and Iran) are playing a zero-sum game,” Kadhim told Al-Monitor. “Opponents of the US presence want to have the troops out. … Those in the middle of the debate are ready to entertain a partial withdrawal of those troops there to fight ISIS, but keep those there to train the Iraqis. Iraq purchased a lot of [US defense/weapons] contracts. … Keep the trainers to show how to use those weapons. … And some people say some personnel to protect the embassy.”

“The US, from its own side, sees even a partial withdrawal now as giving a victory to Iran,” Kadhim said. “They don’t want the optics of pulling out US troops showing a victory for the Iran side.”

“The Iraqi government does not want to get the [US] troops out,” Kadhim continued. “They realize there are benefits, not just in security, but in capacity building for Iraqi forces. … They need US infrastructure."

Kadhim said, “Ultimately, those on the street, armed groups, [have given a] unanimous verdict to parliament to get the US troops out.” Caretaker Iraqi Prime Minister Adel Abdul Mahdi “is scared to death some troops might be killed on his watch. He doesn’t want this to happen. There would be major consequences. … And that is where the situation is.”

The effectiveness of US troops in Iraq has been reduced by their concerns over force protection, he said. “Nobody is in charge,” Kadhim said. “It seems more or less the troops right now, from a functional perspective, are not going to be effective for a long time. All they care about right now is force protection. … Their margin of freedom to move around is reduced, suspecting every Iraqi they meet.”

Iraq analyst Nibras Kazimi said the Trump administration's policy toward Iraq, influenced by Secretary of State Mike Pompeo, is increasingly focused on pressuring Iran. “Pompeo would burn Iraq and Lebanon as quick fuel for maximum pressure because he believes regime collapse in Tehran is imminent,” Kazimi, an Iraqi-Kurdish analyst based in Washington, told Al-Monitor.