As Iraq's protests continue, is political solution on the horizon?

As the Iraqi government feels the pressure of protests, political leaders are moving toward forming a national front to resolve the Iraqi crisis. 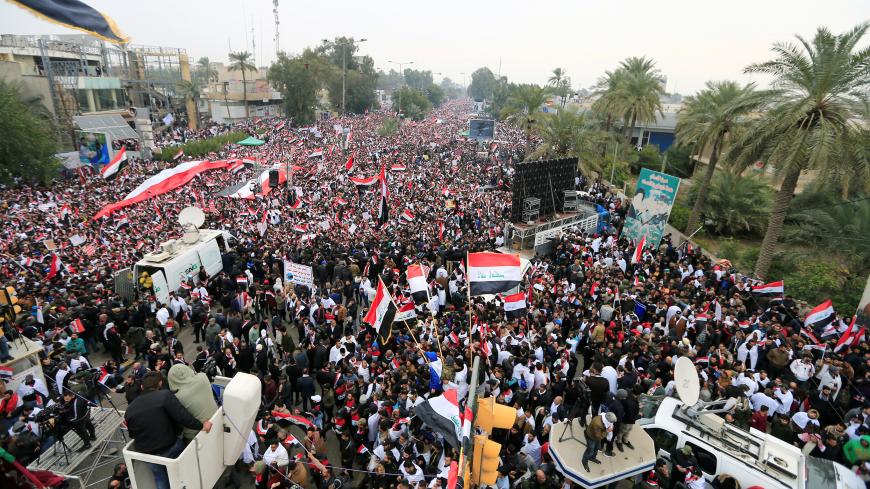 Iraq's current situation has come to resemble a tangled ball of yarn, with new complications and complexities arising daily.

Iraq has turned into a direct battleground between Iran and the United States, yet internal actors are trying to pull Iraq out of the funnel of tensions between the countries.

The main internal forces are Kurds, Sunnis, pro-Iran Shiites, independent Shiites, protesters and the Najaf religious authority, which is playing the game on a national level, not only among Shiites.

All of the above forces — except the pro-Iran Shiites — want to maintain a balance of power between the United States and Iran, and gradually form a unified national position.

That picture is clearer than ever.

Iran has only one ally left in Iraq: the Shiite militias it established. No other parties want Iranian domination of Iraq. At the same time, no one wants the United States to bring its battle against Iran to Iraqi territory.

Iran-backed militias warned Iraqi President Barham Salih not to meet Donald Trump, yet Salih attended a meeting with him at Davos Jan. 22, discussing the strategic relationship between Iraq and the United States — a clear sign that Salih wants US troops to stay in the country.

Trump responded: "We’re talking about a lot of different things … they like what we’re doing and we like them, and we’ve had a very good relationship.”

The US administration has tried to de-escalate the situation with Iranians in Iraq in the immediate aftermath of the Qasem Soleimani assassination to prevent Iraq from becoming a battleground. At Davos, Trump sent a positive message in this regard. “We’re down to 5,000 [troops] so we’re down to a very low number — historically low — and we’ll see what happens,” he said, indicating that he is not willing to increase troops in Iraq and that it's possible different arrangements can be made to calm the situation with Iran.

Salih's speech at Davos was perfectly prepared. He walked a fine line in maintaining a balance between Iran and the United States on one side and different Iraqi forces on the other.

“We seek good relations with all sides, and our interest does not lie in being drawn into conflicts that are not of our making,” he said. “No country should tell us with whom we can develop ties, as it is not in our interest to choose an ally [at] the expense of another.”

Prior to Salih's meeting with Trump, Abu Ali al-Askari, a high-ranking security official in Kataib Hezbollah, tweeted, “We stress the need for Barham Salih to not meet Trump and his vicious mob. If he meets with them then Iraqis will take a stand against him.” He added, “We will tell him that you are not welcome back, and the public will oust him from the country.”

Other figures of Iraq's Iran camp, such as Hassan Salem, a prominent member of parliament from Asaib Ahl al-Haq’s Sadiqoun bloc, and Mohammed al-Ghabban, the former interior minister from the Badr Organization, took strong action against the president. Soon after the meeting, a senior adviser of Salih, Ahmed al-Yasiri, who is close to the Popular Mobilization Units (PMU), resigned in protest of Salih's meeting with Trump.

However, Salih received support from other Iraqis. Kurds are united in supporting Salih's policy of a strategic relationship with the United States. In fact, Kurdistan Region President Nechirvan Barzani accompanied Salih to Davos and even met with Trump himself.

Barzani, moreover, expressed support for Iraqi protesters' demands, saying that after the protests Iraq cannot be the same as before. "It is very important for the Iraqi politicians to understand this," he said. "Iraqis will not accept the return to the situation of before October 1. They deserve a better life and they have conveyed their message to Iraqi officials in the protests."

He said he supported the unity of Iraq and emphasized the necessity of a US troop presence in Iraq to fight terrorism. "We believe that this goal [of preventing terrorism] will not happen without support from the international community, especially the US," he said. "Therefore, the US troops have to remain."

The Jan. 24 Friday sermon of a representative of top Shiite cleric Ayatollah Ali Sistani was in line with Salih's position in Davos. He called for respecting Iraq's sovereignty, undertaking reforms in line with protester demands and accelerating the process of forming a new government to extricate Iraq from its current crisis.

Former Vice President Osama al-Nujaifi, a prominent Sunni leader, praised Salih's position in Davos. “We highly appreciate the courage of President Barham Salih in carrying out his constitutional duties and choosing to stand with the interests of the people without hesitation or subject to pressure,” he said.

Ammar al-Hakim’s Wisdom Movement praised Salih's position in Davos. A statement read: “The efforts made by the president of the republic in establishing a constructive international dialogue that can lead to the fulfillment of the legitimate demands of our people for the sovereignty, political independence and prosperity of the country are respected and supported by all.”

Muqtada al-Sadr, who called for protests against the US military presence in Iraq, also supported Salih's position in Davos. “President of the Republic Barham Salih is the protector of sovereignty and the protector of the revolutionaries,” he tweeted. His cousin, Jafar al-Sadr, Iraq's ambassador in London and the son of Ayatollah Mohammed Baqir al-Sadr, tweeted, “His Excellency President, the Wall of the Nation and Protector of Reform.”

Sadr addressed the anti-US protesters in a statement Jan. 24, calling upon the PMU to integrate into the Iraqi army and police forces and to obey the Iraqi prime minister as commander of the armed forces. He called for UN and EU supervision of an arrangement that would guarantee Iraqi sovereignty and stop foreign parties from interfering in Iraq's political, economic and military matters.

The flurry of statements and speeches shows the vibrant and dynamic nature of Iraq's political movements, indicating that a national front of Kurds, Sunnis and nationalist Shiites has gradually formed, all under the banner of freeing Iraq from foreign domination.

Over the last few months, the situation in Iraq looked messy, reaching its peak with direct conflict between the United States and Iran. Yet sometimes a solution arises when a crisis reaches its peak.

Now we have the protesters on the ground, with demands that need to be fulfilled or else the crisis will continue. And the conflict between the United States and Iran continues, with Iraq the first to be impacted. Moreover, the internal political scene is divided between the pro-Iran and nationalist camps. How can Iraq get on the right track?

After a long period of instability, it seems all the parties are ready for compromise and to find a solution based on an area of common interest between the parties.

​What is missing is a courageous and wise leader who can create such an area of common interest and convince all the parties to gather at one table. To achieve this goal, such a leader would need to be accepted by political parties and protesters, have a good relationship with both Americans and Iranians, and be respected by the religious authority in Najaf. It's a difficult but possible mission, in which a leader must exploit opportunities and avoid threats.

Candidates so far nominated by the Fatah bloc — the largest parliamentary bloc — have not met these criteria. The candidates were mostly affiliated with Iran and its allies in Iraq, and thus faced objections from protesters and other political parties. This was why Salih resisted Fatah's nominations becoming official. Salih wanted to act as a point of balance between all parties and to guarantee that any candidate would not increase tension and would instead have the potential to stabilize Iraq.

The next prime minister should have good relationships with the United States, Iran, and regional powers — including Saudi Arabia and Turkey — and not be involved in any regional political agendas. The candidate should not be someone rejected by the protesters, and acceptable to Kurdish, Sunni and national Shiite parties.

Although it seems difficult if not possible to find such a name, there are actually a few figures that are very close to the criteria.

The coming days could carry the beginning of a solution to the Iraqi crisis. However, the success depends on how the internal and external actors play in Iraq and to what extent they will cooperate in getting out of the crisis.