US Syria envoy: Any talks on troop withdrawal from Iraq must include all aid

US envoy James Jeffrey says the United States wants to see its operations against the Islamic State in Iraq — which have been paused as US and coalition troops focus on protecting themselves in the wake of an escalation between US forces and Iranian-backed groups — resume as soon as possible. 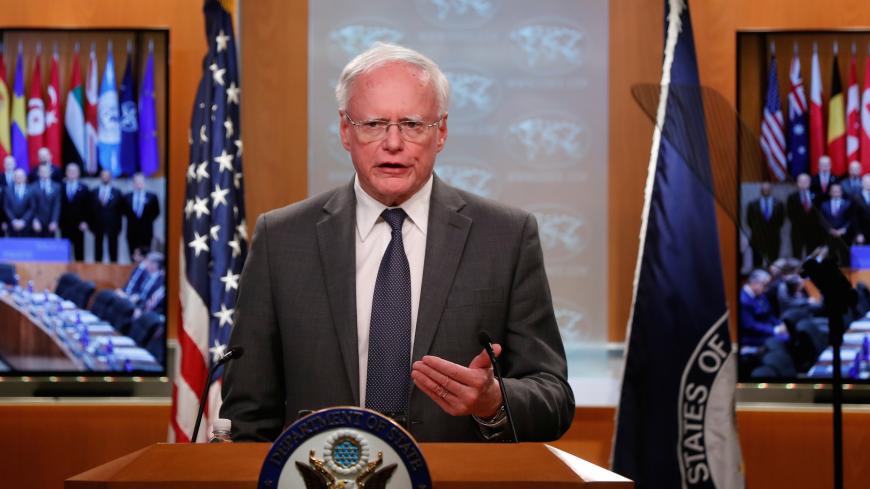 James Jeffrey, the US special envoy for Syria and to the global coalition to defeat the Islamic State, speaks during a news conference at the State Department in Washington, Nov. 14, 2019.

US-led international operations in Iraq against the so-called Islamic State (IS) have been put on pause, as some 5,000 US forces in Iraq are primarily focused on protecting themselves in the wake of escalating violence between the US military and Iranian-backed groups that culminated in the Jan. 3 US drone strike on Iranian Maj. Gen. Qasem Soleimani and an Iraqi militia leader at Baghdad airport, a top US envoy said today. But any discussions with the Iraqi government about a possible future withdrawal of US forces in Iraq would need to be broadened to encompass the entire scope of US-Iraq relations, including diplomatic and financial support, said James Jeffrey, the special envoy to the global coalition to defeat IS.

“We have said that we’re not interested in talking about withdrawal because we don’t think we should withdraw,” Jeffrey, who also is the US special representative for Syria, told journalists at the State Department today. “However, at the end of the day, this is obviously an Iraqi decision on the future of the American and the coalition presence. We acknowledge that.”

“We’re not interested in sitting down and talking only about withdrawal,” Jeffrey, a former US ambassador to Iraq, continued. “Any conversations that the Iraqis want to have with us about the United States in Iraq we believe should and must cover the entire gamut of our relationship, which goes way beyond our forces, goes way beyond security. … It’s the long-term re-equipping of the Iraqi military forces. It’s the regional agenda. It’s our diplomatic support of Iraq, our financial, our monetary [support].”

Jeffrey spoke a day after US President Donald Trump met with Iraqi President Barham Salih in Davos, Switzerland. Salih said he urged restraint to cool escalating US-Iran tensions, to avoid a new confrontation. “We have had a very good conversation with the president [Trump], and we had a very candid conversation [about] the need for basically restraint, calming things down,” Salih said after addressing the World Economic Forum on Wednesday. “This is not time for another conflict. In my conversations with many actors in the region, everybody … is saying, ‘This is getting out of hand. Please cool it down. Restraint.’”

Jeffrey said while US-led coalition counter-IS operations in Iraq have been on pause over force protection concerns, the Iraqi military has conducted military operations against IS, including a half dozen in the previous 24 hours. The coalition does not yet see a resurgence of IS amid the limbo of international coalition operations, but remains concerned about the prospect that it could do so. The United States has been involved in the mission against IS since 2014.

“Coalition operations have been primarily on pause in Iraq as we focus on force protection and looking into the way forward with the Iraqi government after the nonbinding vote by the Council of Representatives on the withdrawal of US and thus coalition forces,” Jeffrey said. “The Iraqi Armed Forces are continuing to conduct operations.”

Asked how long US forces would stay in Iraq while they are focused on force protection rather than the mission of countering IS, Jeffrey stressed the US-led coalition remains deeply committed to the mission.

“Obviously, we’re not keeping thousands of Americans and thousands of other coalition country troops in Iraq without doing something,” he said. “We have a mission, it’s an important mission. The mission is much wanted by the Iraqi military and by, we believe, most Iraqis.”

But he conceded that a resurgence of IS — which he referred to by its Arabic acronym, Daesh — could erupt if the force protection concerns keep coalition operations sidelined.

“Over time, obviously, there is a possibility of a degradation of the effort against Daesh if we’re not able to do the things that we were doing so effectively up until a few weeks ago,” he said.

NATO has conducted preliminary discussions with Iraqi officials about possibly expanding its role in Iraq, but the discussions are in the early stages, Jeffrey said. He said it is in theory possible that some international forces might, for instance, eventually be put under the NATO rubric that were previously under the coalition rubric — although it was unclear if doing so would solve Iraqi political pressures that led the Iraqi parliament to vote this month to recommend the Iraqi government ask foreign forces to leave the country.

The Iraqi government has been asking the United States for negotiations on reaching a new understanding that regulates the presence of US troops in Iraq, rather than for a full-fledged withdrawal, said Farhad Alaaldin, who was an adviser to Iraqi President Fuad Masum (2014-2018).

“I would say, outside of the extremes, the majority of Iraqi officials don’t want the US to leave,” Alaaldin, now the chairman of the Iraq Advisory Council, told Al-Monitor by phone from Iraq Wednesday. “And the Iraqi government has been asking for negotiations as to reregulate the presence of the US troops, rather than take them out.”

“So basically it is a matter of reaching common ground of how to have the US troops there and under what conditions and what framework,” Alaaldin, a contributor to Al-Monitor said. “I would say this is what they are aiming at.”