Iran’s next moves depend on US

Iran is likely to choose a measured response to US actions, as long as Washington does the same in return, while at the same time trying to increase US costs of staying in the region. 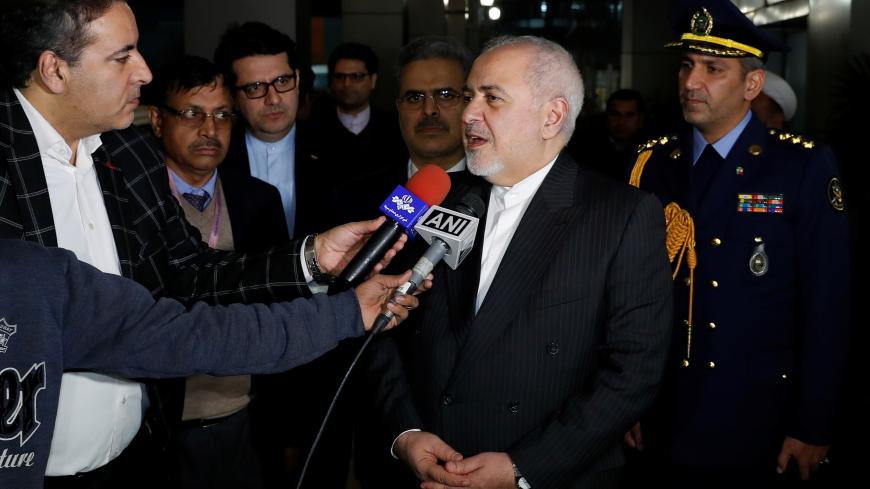 A strong wave of anti-Americanism swept Iran following the US assassination Jan. 3 of Maj. Gen. Qasem Soleimani, the commander of the Quds Force of the Islamic Revolutionary Guard Corps (IRGC). Although the fever pitch of that sentiment isn’t likely to last, its consequences will be reflected in Iran's domestic and foreign policy.

The first repercussion is a change in Iran’s political alignment: Conservatives and hard-liners are growing stronger, while Reformists and moderates are losing ground.

Even Iranian Foreign Minister Mohammad Javad Zarif, who often favors diplomacy over a hard approach, insisted Jan. 7 that Iran’s retaliation must cause the United States pain. Outside Iran, many officials and media in the United States, Europe and the Middle East have commented that Iran is ready for a tough confrontation.

But growing support for Iranian special forces and the conservatives’ position doesn’t necessarily mean abandoning diplomacy and preparing for war. Political processes in Iran have their own complexities. Many analysts and commentators ignore that Iran pays attention to cost-benefit calculations in a rational manner while keeping up its guard against the United States.

Tehran, on the one hand, believes in its abilities in both conventional and asymmetric warfare, and by acting against the United States in Iraq, has shown it can use these capabilities effectively. On the other hand, Tehran is also aware of US capabilities to strike and knows any war will cause irreparable damage to Iran. So while reporting on Iran’s missile strike on US bases in Iraq, the IRGC Aerospace Force commander, Gen. Amir Ali Hajizadeh, emphasized that self-restraint on both sides kept war from breaking out. Iran wasn’t seeking to kill American troops — though it could have done so if it had wished. After the attack, Zarif also said Iran is not seeking escalation or war.

The IRGC, which was involved in the 1980-88 Iraq-Iran war, understands the concept of balance of power and the cost-benefit equation more than anyone in Iran. With this in mind, the possibility that Iran will forgo diplomacy and seek broader and direct action against the US is low.

However, Iran's caution and self-restraint does not mean it will be inactive. Iran’s strategy toward the United States in the region will certainly change. Most notably, there will be a shift from active resistance to "hybrid offensive resistance" aimed at increasing the costs of hitting Iran, and increasing Washington’s cost for the US presence in the Middle East. To realize this strategy, Iran will seek to:

Regarding the first objective, Iran has significantly increased its military capabilities in recent years. Its military action against the United States in Iraq, regardless of the amount of damage, reflects the improved quality of its military power. But the military buildup has been done to bolster conventional deterrence, and Iran is not looking for a full-scale direct war. In this regard, it is hard to agree with international affairs expert Stephen Walt that Soleimani's assassination is an incentive for Iran to acquire nuclear weapons. Tehran knows that while nuclear weapons would increase its power against the United States and its allies, the development process would make Iran a greater target.

Concerning the second objective, it should be noted that the Iranian-led axis of resistance in the region has been strengthened in recent years. A significant part of Iran's regional influence — from Yemen to Iraq, Afghanistan, Palestine, Syria and Lebanon — is due to the support of this axis, including from proxy and pro-Iran forces. Iran has received declarations of support from the leaders of these forces, including Ismail Haniyeh of Hamas, Hezbollah Secretary-General Hassan Nasrallah, Iraq's Popular Mobilization Units, Iraqi Sadr movement chief Muqtada al-Sadr and Yemen's Houthi movement leader Abdul-Malik al-Houthi. Some of these heavy hitters have stated that they, in their turn, will take revenge for Soleimani's death.

By taking advantage of all this support, Iran can also achieve its third goal, weakening Israel, which would be a matter of concern for the United States.

Iran understands well that achieving its fourth objective would be very difficult. US hosts in the region are unwilling to break off their relations with Washington, and anti-Iranian sentiment prevents them from cooperating with Tehran to de-Americanize the region. However, in pursuit of this goal, Iranian Supreme Leader Ayatollah Ali Khamenei this month tried to convince Qatari Emir Sheikh Tamim bin Hamad Al-Thani that the Middle East would be safer without the United States.

On this basis, it seems that Iran will focus on the second and third goals, which are its chief strength. In this way, Iran not only can develop greater leverage against the United States, but in the long run could also realize the fourth goal.

At the same time, Iran understands that relying on its conventional and asymmetric forces in the region can’t fully achieve the aims of active deterrence, hybrid offensive resistance and de-Americanization of the region. Therefore Iran will seek, more than ever before, to enhance relations with major powers opposed to the United States, including Russia and China.

But there are some limitations to consider. First, Iranian society is complex and varied. The emotional impact of Soleimani's assassination will gradually diminish and Iran will take a cautious approach toward the United States, calculating the high costs of direct confrontation. Meanwhile, the Iranian people have been under the pressure of US sanctions in recent years and don’t seem ready to bear more.

Second, proxy and pro-Iran forces in the region are not fully obedient to Iran's orders. It wouldn’t be accurate to assume Iran can use them at any time and any place to achieve its goals. Although there are close links between Iran and these forces, they have their own return-on-investment rationale and their decisions and actions aren’t always in harmony with Iran.

Third, although some major powers, including Russia and China, support Iran against US pressure, their support is not sustained and comprehensive. Tehran is well aware that these powers aren’t willing to support Iran in a confrontation with the United States and will distance themselves from Tehran if the situation escalates.

Accordingly, Iran prefers a "managed tension" where strengthening the axis of resistance, along with proxy and pro-Iran forces, is the best and most effective option to increase Iran's security and increase US costs in the region.

Therefore, although Iranian officials said the strikes on US bases in Iraq were just the "start of big operations," at the same time they showed that Iran doesn’t want a widespread conflict. Anyway, Iran's future behavior will depend largely on that of the United States. If the US response to Iran's attack on the Al-Assad base is self-restraint, tensions between the two countries will be better managed. But any violent action by the United States will surely prompt a violent backlash from Iran in the framework of its hybrid offensive resistance strategy.